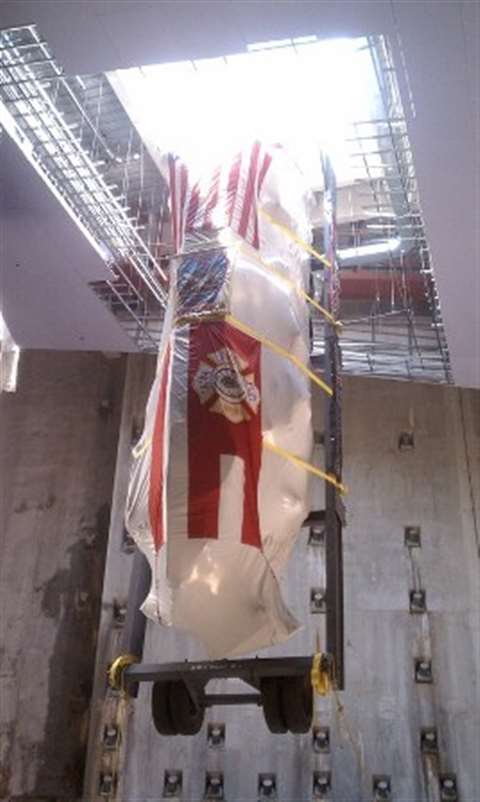 Rigging, machinery moving and demolition specialist R. Baker & Son took part in a ceremony at the National September 11 Memorial & Museum in the USA. It was to honor the 12 firefighters from Ladder Company 3 who lost their lives in the World Trade Center attacks of September 11, 2001.

The challenge was in figuring out how to lower the 58,000 pound fire truck vertically through a narrow opening into the museum 70 feet below ground, then return it to its horizontal position using only one crane. The solution was a RAFT, or Rigging Apparatus for Fire Trucks, custom-designed by the R. Baker & Son team.

The first step entailed securing the fire truck, at the hangar where it had been stored, to the RAFT frame, which was fabricated for R. Baker & Son by Integrity Iron Works. Escorted by Ladder Company 3, the RAFT assembly was transported to Ground Zero.

A 350-ton capacity Liebherr LR 1350 supplied by Bay Crane was used to offload the assembly. Using a set of tailing axles incorporated into the RAFT design, the fire truck was turned to a vertical position.

As Mayor Michael Bloomberg, Fire Commissioner Salvatore Cassano, firefighters, family and friends looked on, the shrouded, flag-draped fire truck was carefully maneuvered down into the exhibition space. Using the RAFT's tailing axles, the truck was moved back into a horizontal position. A Versalift 2535 was used to move it to a temporary exhibition area.

R. Baker & Son also rigged several other artifacts into the museum including Engine 21 and the iconic World Trade Center Cross. This cross-shaped section of steel beams was discovered in the rubble and erected at Ground Zero, where it stood for several years as a symbol of solace.

In 2006, the cross was temporarily moved to nearby St. Peter's Church.

The R. Baker & Son team transported the cross from St. Peter's to the museum after a ceremony attended by former Mayor Rudolph Giuliani and recovery workers.