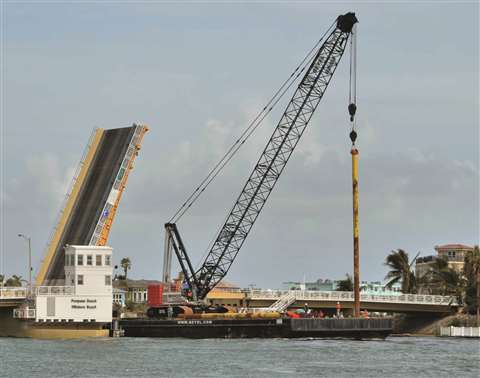 Beyel Bros. sent Captain Mike, the tug Brittany Beyel and its crew of four with the crane barge, also employing a crew of four, from its Ft. Pierce Deep Water Terminal down to Lighthouse Point, a 100-mile trip south on the Intercoastal Waterway.

In August 2017, after the Category 5 Hurricane Irma ravaged Puerto Rico and battered the Florida Keys, weathercasters were focused on which path northward the storm would blow – to the left, right or up the center of Florida. Whichever path she chose, there would be destruction and people scrambling to get out of the way. Among the hapless victims of Hurricane Irma were docks and hundreds of boats of all sizes, which sank or broke their moorings as Irma ran her course up through the middle of Florida, creating havoc on both the east and west coasts of the state and causing widespread damage.

Preliminary estimates had placed the amount of damage that Hurricane Irma would cause at a minimum of $60 billion. While it did go on to affect multiple states in the South besides Florida, except for the Florida Keys, the property damage was not as bad as initially estimated.

Caught up in the hurricane’s winds and storm surge was a 92-foot (28 metre) Hatteras yacht named My Lady. Due to insurance restrictions the boat could not be moved to safe harbor. 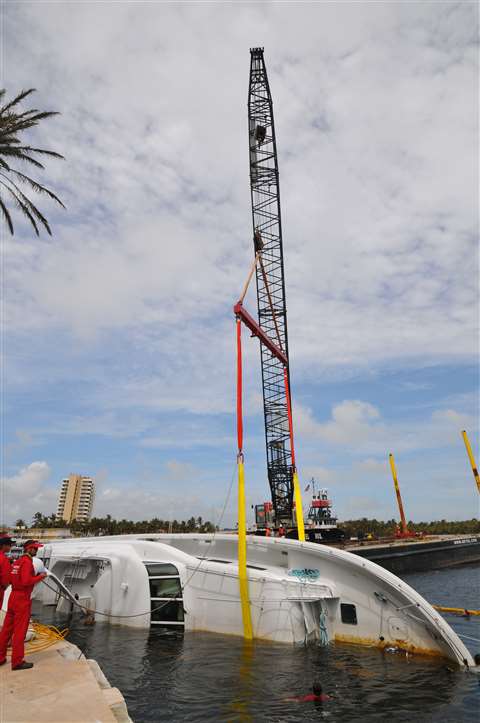 Built in 1998, My Lady was the first of the Elite Series of Hatteras motor yachts.

She was found listing badly in her mooring behind the owner’s house, with her bow facing east. The force of the storm had pulled out both the bow and stern pilings and thrust the boat into the south dock. After the storm passed, the owner called in a salvage company that placed pumps onboard to try to right the listing vessel. It was determined that the hull had been breached as the boat rolled onto the concrete dock. Wider measures would have to be taken as the breach was too great for the pumps to overcome and clear out the water sufficient to re-float the boat. It would require an almost simultaneous lift and repair to seal the opening. This could not be accomplished with a land-based crane as there was not enough room to get to the dock from the front of the house. It would have to be done with a crane barge guided by highly skilled and experienced operators.

Enter Beyel Bros. Crane and Rigging, a go-to company when there is a lift that has to be done with precision and without guess work. On receiving the call, Beyel Bros. sent Captain Mike and the tug Brittany Beyel and its crew of four with the crane barge, also employing a crew of four, from its Fort Pierce Deep Water Terminal down to Lighthouse Point, a 100-mile (162 km) trip south on the Intercostal Waterway (ICW).

Maneuvering the 180-by-50-foot (55 x 15 meter) crane barge on the journey from Fort Pierce to Pompano Beach was tricky enough but added to the excitement was a 90 degree turn from the waterway to pass through the Hillsboro Beach Draw Bridge. There were only inches of clearance between the barge and bridge fenders.

Arriving at the salvage site, the barge, with its Link-Belt 348 lattice boom crawler crane secured to it, was maneuvered into place with the bow facing south and the rest of the barge partially blocking the surrounding waterway. The survey of the Hatteras vessel after Hurricane Irma found her listing to the south and resting on the concrete dock. But on arrival of the tug and barge, she was at 90 degrees to the waterline and resting on the sandy bottom.

Divers from TowBoatsUS, a salvage contractor, placed a lifting sling aft of the bow. This was done by passing the sling under the underwater starboard side of the boat though the sand. Beyel’s crane operator moved a lifting spreader beam with straps over to the divers who hooked it up  to the under boat strap. At this point the bow section was lifted very slowly to the point of maximum crane lift. What was needed was to get the boat up out of the sand sufficiently so that the main lifting straps could be placed toward the stern.

As lifting operations paused for the night, the Sheriff’s Marine Units found it necessary to run “boat control” as the operation had become an event when a local TV station reported it on its nightly news, complete with helicopter coverage.

As work resumed in the morning, two sets of lifting straps were see-sawed, pulling a strap back and forth between the barge and dock, from the bow to the boat stern into pre-determined lifting points as specified by TowBoatUS divers and operators. Simultaneously, Beyel’s riggers were assembling multiple sets of spreader beams and lifting straps, which were hooked up to both crane hooks as divers attached them to the underwater boat straps.

With the lifting straps and spreader bar system in place, the area was cleared of personnel and the lifting operation began.

The plan was to roll the boat using the two crane hooks, one holding and one lifting. The operation had to pause for a short time for the barge to re-ballast with water. There were some tense moments when a second stoppage was required as the aft onboard derrick crane was caught under the dock. Divers went down and cut all the hydraulic and electrical lines in an attempt to lower it, but due to a mechanical safety interlock this was not possible. 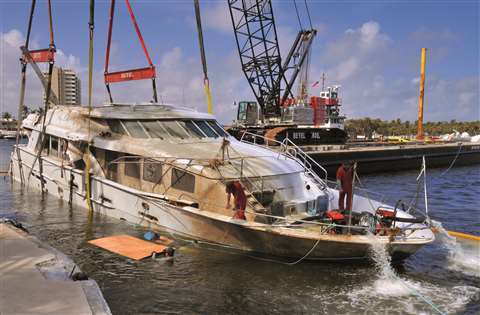 As work resumed in the morning, two sets of lifting straps were see-sawed, pulling a strap back and forth between the barge and dock, from the bow to the boat stern into pre-determined lifting points.

It was decided to move the boat away from the dock, as the crane already had the boat suspended above the bottom. This was accomplished by attaching a tow line to the stern of the boat, then passing it around a tie-off on the barge and then onto one of the tow boats. Moving slowly, it was inched away from under the dock.

The crane then rotated the vessel to the upright position and divers went down again and screwed plywood over the open holes that formed the breach in the hull. Several gas-powered water pumps were placed on the deck to pump out the water until it was safe to disconnect the rigging from the crane.

After several hours of pumping and additional prep work, the damaged vessel was towed down to a boat yard in Fort Lauderdale where its ultimate fate was to be determined by an insurance carrier.