According to OSHA, in the United States, cloud-to-ground lightning occurs 20 to 25 million times and over 300 people are struck by lightning annually. During the past 30 years, about 50 people, on average, have been killed by lightning strikes every year, and many more suffer permanent disabilities. 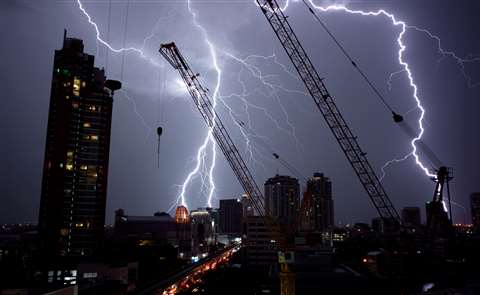 Crane operators, workers on construction sites and those handling heavy equipment are especially vulnerable to the threat of injury or death posed by lightning. The fact is, people working outdoors in open spaces, near tall objects, or with conducive materials like metal or explosives are in significant danger any time a storm begins to form.

Despite this, lightning is often overlooked or ignored as an occupational hazard. Safety practices and procedures regarding lightning should be revisited and conveyed to workers as often as possible, especially during higher risk times such as hurricane season and summer.

Make sure your crane operators and workers fully understand what lightning is, how and where it occurs and what can happen when it strikes. Thunderstorms always include lightning – in fact, lightning causes any audible thunder, and many workers may not realize the connection between the two. Emphasize too that lightning is unpredictable and can strike outside the heaviest rainfall areas or even up to 10 miles from any rainfall.

It’s impossible to be too careful when it comes to avoiding lightning exposure. Many lightning victims are those who have been caught unawares by a storm, so ensure that weather forecasts are checked often and communicated to all. Ensure that your workers aren’t stuck outside in a storm or that they find themselves in danger by assuming a storm (and potential for lightning striking) has passed when it has not. Planning is prevention, so take the time to prepare your workers.

3. Create a plan and communicate it

Make sure workers at your construction site know which buildings to seek shelter in after hearing thunder or seeing lightning. If safe building structures aren’t accessible, employers should guide workers to hard-topped metal vehicles. Remain in the shelter for at least 30 minutes after the last sounds of thunder. A clear, written Emergency Action Plan (EAP) should include a written lightning safety protocol for outdoor workers.

Despite careful planning and precautions, workers may sometimes be caught outside when a storm hits. Unfortunately, there is simply no completely safe place outside during a thunderstorm. NOAA has a number of prevention tips for avoiding being struck if workers can’t get to a safe place at the first signs of a storm and are caught outside. Convey these prevention tips to your workers and post them at or near outdoor work areas.