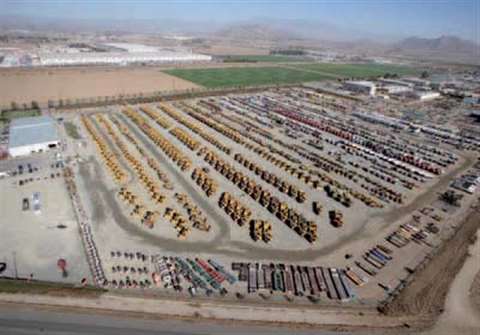 At an auction in Los Angeles in December Ritchie Bros. sold more than 3,200 vehicles and machines

At an auction in Los Angeles in early December, Ritchie Bros. Auctioneers sold a record $48 million worth of trucks and construction equipment. More than 3,200 vehicles and machines were sold, and close to 2,700 bidders registered for the auction. Registered bidders represented 27 countries, eight Canadian provinces and 43 US states. Internet participation also broke records for the Los Angeles auction location, the company said.

“It was a very large auction with a tremendous selection of truck and equipment items for buyers, who came from around the world to participate,” said Richie Bros.' Richard Aldersley. “The results of this auction show that the market remains strong - there was a big demand for late-model equipment.”

Also in December, Ritchie Bros. held an auction in Fort Worth, TX, where more than 2,500 trucks and equipment items were sold, for more than $27 million. More than 2,200 people registered for this auction, with bidders from 26 countries, as well as from 48 US states and nine Canadian provinces, the company said. At the Fort Worth auction, a 100 ton capacity Demag AC 205 all terrain crane sold for $360,000.