I heard the comparison that the relationship between the bid callers and the buyers is almost romantic. A heated back and forth of unspoken gestures, communicating through the smallest nod or slight of hand. Bidders show interest nonverbally, and as I sat at the Ritchie Bros. auction in Orlando in February watching the various auctions taking place, I never actually saw a single movement that would indicate prospective buyers were interested in bidding. I was in an entirely different world, “listening” to an entirely different language. 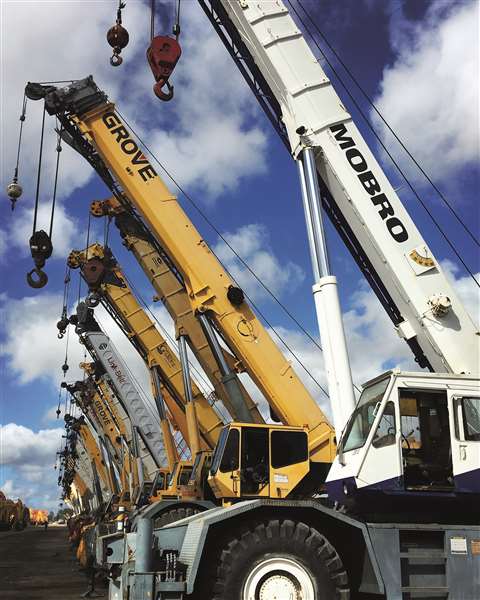 Over 150 cranes were for sale at the Ritchie Bros. auction in Orlando, FL. In total, more than 12,800 pieces of construction were sold at the annual auction.

With a palpable energy in the air, the auctioneer began calling out bids in a manner than was almost trance-like.I sat in awe watching the massive machinery travel across the ramp of the main auction theater as both virtual and physical bids came flooding in. “Euphoria.” That’s how the auction atmosphere was described by Doug Olive, senior vice president, pricing and valuations, Ritchie Bros. After witnessing it, I can absolutely attest to this.

Ritchie Bros. hosts a variety of used equipment auctions throughout the year, but the Orlando, FL auction famously draws a crowd of buyers from near and far. Since May 2017, when Ritchie Bros. acquired IronPlanet, the company’s auctions have only grown.

At the Orlando auction more than 12,800 pieces of machinery were up for grabs, and each one would be sold by week’s end. The third day of the auction was dedicated to more than 150 cranes – more specifically – five all-terrains, 25-plus crawler cranes, 90 rough terrains and more than 10 hydraulic truck cranes.

Some 200 acres are allotted for equipment display at the auction site, and over the course of six days, buyers flooded to Orlando to shop for construction equipment from around the U.S. and the world. 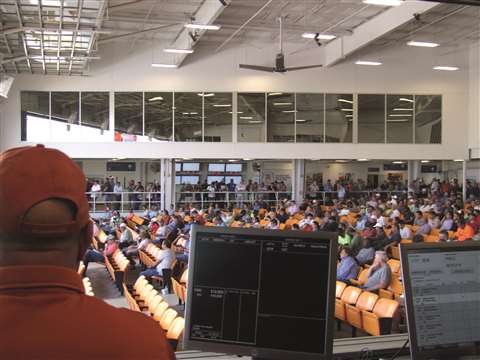 More than 13,350 bidders from 90 countries registered to participate in the Orlando auction including over 8,600 online bidders who purchased $123 million of equipment.

“We created history [in February], with a record $278-plus million auction, which was a 24 percent increase compared to the combined Ritchie Bros. and IronPlanet GTV from last year – a monumental event for the used heavy equipment and transportation sectors,” said Ravi Saligram, chief executive officer, Ritchie Bros.

A special feature included in this year’s auction was the opportunity to bid virtually, on the Ritchie Bros. mobile bidding app, in addition to an in-yard virtual ring that accommodated more bidders. Ritchie Bros. also brought its online auction clerks to Orlando to catch online bids right in the auction theater.

The final virtual numbers included 8,600-plus online bidders who purchased more than $123 million-dollars’ worth of equipment – over 44 percent – of the machines for sale.