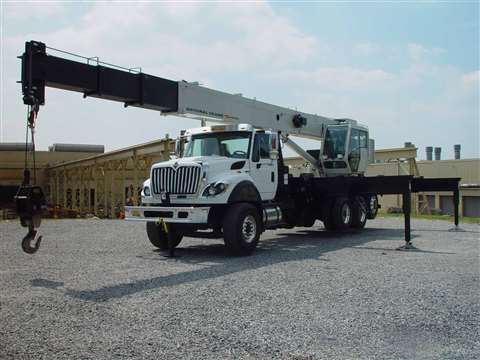 General crane trends typically fall into a handful of categories, with two of the majors being higher capacities and longer reach. Truck cranes are no different, with manufacturers currently noting that customers are asking for higher capacity cranes, some of which have more than 70 tons of capacity.

Jay Barth, product marketing manager for Terex truck cranes, says the trend is driven in part by a continual demand for more efficient construction methods. "This has led to building components that are much larger and weigh more," he says. "As the construction industries evolve to heavier components, so do the cranes required to lift them. This has led to a significant change in the demand for higher capacity truck cranes."

Customers looking for a large crane that can be configured easily with less counterweight to meet requirements of smaller jobs - kind of like having their cake and eating it too - are a part of the demand as well.

Great truck cranes follow a recipe that's been the same for years: more capacity, more reach and better transportability, says Rick Curnutte, Link-belt Cranes' manager of telescopic boom cranes. For example, Link-Belt's HTC-3140 is an example of a truck crane with major mobility; the unit has counterweight that breaks down into pieces that weigh less than 12 metric tons, which allows the crane to be moved with more components on a single truck load.

Such is a similar case for National Crane's 45-ton capacity NBT 45 truck crane that can be mounted on different carrier types, the company says. "This is particularly helpful in controlling spare parts and maintenance costs if a company already has boom trucks mounted on certain trucks in its fleet," National Cranes says.

Although the truck crane doesn't have the mammoth capacity that some of the others in the pact do, the NBT 45 features a 142-foot, five-section boom, which, according to Brian Peretin, vice president of sales and marketing for National Crane, says is the longest boom in its size range.

On the raod again

"[Transportability] is a great challenge, but we spend a lot of time and resources to get it right," Curnutte says. "Because the roading laws seldom change, we are continually challenged to add more capability and still maintain travel weights."

Road travel is at the top of most minds, and Barth says the ability to easily comply with road regulations while traveling is a big request. "Customers want easy of set-up at the jobsite and easy of return to road transport when the job is complete," he says. "The ability to move quickly from job-to-job in a cost-effective manner is key to truck cranes."

Also by having ease-of-use, costs are kept lower and less time is used when setting up. "In the future, I believe we will see cranes with higher capacities, longer booms and a higher level of technology," Barth says. "New pin-boom systems will be developed as the need for higher lift capacities requires that booms be stronger and, at the same time, weigh less."

With Tier 4 standards phased in from 2008 to 2015, Curnutte notes that a huge challenge in the coming years will be dealing with the passing of the emissions laws. "Emissions equipment will add weight to all cranes," he says.