The U.S. space program has historically built in redundant systems on just about every rocket and spacecraft it ever manufactured for good reason. Human life is on the line, not to mention expensive machinery, so catastrophic failure must be avoided at all costs. 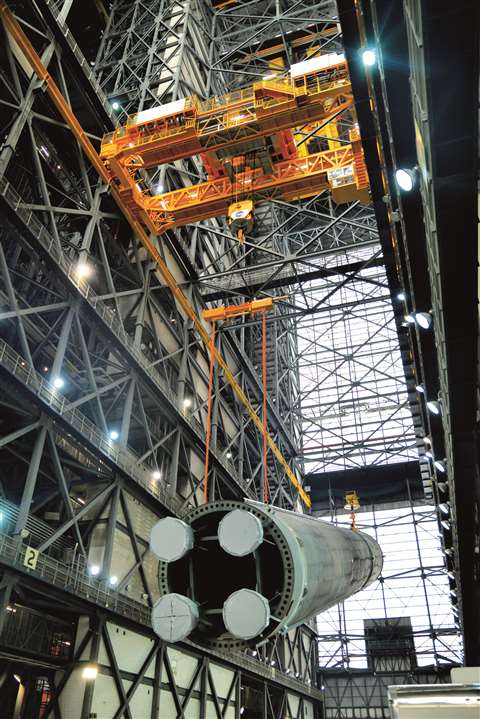 Since the last shuttle mission in 2011, NASA has been upgrading its infrastructure to get ready for its next generation of spaceflight  with its Artemis 1 rocket. PHOTO CREDIT: JULIAN LEEK

This is not the case for its ground support facilities. If something breaks, someone can usually go out and make repairs. However, that is not the case when it comes to the unique, one-of-a kind equipment developed for the space program, as it can only be maintained during down-time between scheduled launches, as time permits, usually not for long periods of time.

Since the last shuttle mission STS-135 in 2011, NASA has been on an ambitious schedule to upgrade its infrastructure to be ready for its next generation of spaceflight, the Space Launch System (SLS), with its Artemis 1 rocket. This is a U.S. next generation advanced super heavy-lift expendable launch vehicle scheduled to launch sometime in 2020 or later.

By the time the Space Shuttle program ended, several buildings, aircraft, tracking and relay systems, launch pads, miles of cabling, barges, transporters, fire and safety and cranes were well-used and maxed out in terms of their design life. Much of these systems were pretty much “on life support” and seriously in need of being upgraded or replaced prior to initiating this new program.

NASA, an acronym for the National Aeronautics and Space Administration, formed in 1958, is the federal agency that has long been responsible for overseeing activities related to aerospace research, aeronautics and the civilian space program. But in actuality, NASA is made up of thousands of subcontractors working under its umbrella.

One of these subs is PaR Systems, located in Shoreview MN, a primary supplier of custom cranes and services to NASA. PaR has a crane team stationed at the Kennedy Space Center (KSC) and is now taking part in a lift-training program for the new SLS rocket. Before attempting this lift, the two overhead cranes in the Vehicle Assembly Building (VAB) had to be modified and renovated. One of these two overhead bridge cranes dates back to the Apollo Space Program of the sixties and seventies. The 175-ton overhead bridge crane in the VAB, custom-built by Colby Crane 54 years ago, has been heavily upgraded and modified since the shuttle era. Completely gutted, upgrades include new relay logic and wiring, an updated control system with Avtron drives/PLCs and a new control cab. The other overhead bridge crane in the VAB is a 325-ton #2 crane originally custom-built 25 years ago by Ederer (now owned by PaR Systems) and operating with minimal modification or upgrade.

A full-scale mock-up of the 212-foot long, 27.6-foot diameter, 228,000-pound SLS Pathfinder Core Stage was rolled into the VAB on its self-propelled Wheelift Systems transporter, after arriving by barge from the Michoud Assembly Facility in New Orleans.

American Crane & Transport photographer Julian Leek was granted exclusive access to the restricted areas of the VAB high bays during this lift operation.

The forward end of the Core Stage Pathfinder was attached to a custom-made spider fixture with leveling capability onto the hook of the 325-ton Ederer crane. Another set of specialized lifting gear, the Aft Lifting Equipment (ALE), was attached to the rear Colby Crane and tandem-lifted the Core Stage off the transporter. After reaching a predetermined level height above the ground, the lifting operation began with the two cranes working in tandem, one lifting and one holding position and then converging onto each other with one lifting while the other lowered the rear of the Core Stage until it was vertical and the rear attachments could be removed.

This was a test run and will be repeated a number of times with different operators before the actual flight-ready hardware arrives. As with the Space Shuttle’s external tank the SLS Core Stage will be hoisted up to the transfer isle and moved over to be lowered onto the mobile launch platform (MLP) where it will be mated to the solid rocket motors.

During the Space Shuttle era, NASA transported the massive space shuttle external tank, that measured 154-feet in length and 27.6 feet in diameter, on a custom-made covered sea-going barge named Pegasus for a distance of approximately 1,000 miles from NASA’s Michoud Space Systems Assembly Facility near New Orleans down the west coast of Florida, around the Keys and up the east coast of Florida to the Kennedy Space Center (KSC). 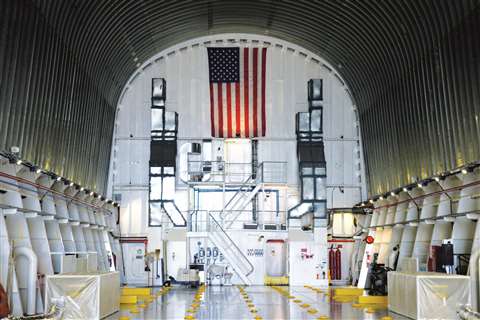 During the downtime between the shuttle era and the new Space Launch System (SLS) program, NASA had Pegasus modified and refurbished to transport the SLS Core Stage Pathfinder to KSC for its new deep space mission. The SLS Core Stage Pathfinder measures 212-feet in length and 27.6 feet in diameter and measures over 50-feet longer than the older shuttle external tank. As the core stage is more than 50 feet longer than the space shuttle external tank and was more than 600,000 pounds heavier, some modifications were necessary to accommodate the greater length and additional weight.

In 2014, crews at Conrad Shipyard LLC in Morgan City, LA were given the task to refurbish the barge. A 115-foot section of the barge was removed and replaced with a 165-foot section which had been especially designed to allow for the increase in the cargo length and weight. The docking area at the NASA’s KSC Vehicle Assembly Building (VAB) turning basin was also modified to accommodate the upgraded barge.