Apart from heavy rains that resulted in major flooding along the coast in Oregon in December, business in the Pacific Northwest is moving right along. Healthy activity in both the transport and crane industries has never been better, according to sources in the region. In fact, the disaster that flooded the coast of Oregon along Interstate 5 will create more work for crane and transport companies.

Why is business so good? The aerospace and power industry is booming, according to several of the crane and transport companies in this region. The presence of Boeing Corp., as well as computer companies Microsoft and Amazon.com, pull in a lot of business in Washington and Oregon.

Oregon's Emmert International, in Clackamus, reports that the workload has been the busiest it has been in 38 years. President Terry Emmert says the basic economy has been strong, with real estate in the Portland and Seattle area among the strongest in the nation. The company's main business is in heavy transport and lifting with hydraulic gantries. The company has also has offices in Rome, TX and Danbury, TX.

According to Emmert, the company has “a very good workload in 2008 and 2009.” In addition to its already heavy work schedule, the company will see more business from the recent floods that have taken hold of the state.

“It will result in a lot of work in the moving division,” says Emmert of the heavy rains. “We will be moving buildings, and a lot of structures we will have to jack up and raise. These floods will add to the workload over the next year.”

Third-generation company Wilhelm Trucking & Rigging, in Portland, reports likewise in the state. President Bob Wilhelm Jr. says the company had an excellent 2007 year and its customers say the next year looks busy. The company does a lot of work in concrete hauling, bridge beams, and prefab buildings.

“The economy has been perking right along and there's a lot of development in the Oregon/Washington area, both industrial as well as commercial,” says Wilhelm Jr., adding that the company just completed a 120-windmill project in Oregon, and that they are now “taking a deep breath” before other projects.

This spring, the company will celebrate its 60th year anniversary with the SC&RA. The company was founded in 1910.

“Our economy has been strong, unlike a lot of areas [around the US],” says Brian Lindgren, director of vocational sales with Kenworth Truck Co., of Kirkland, WA. In the company's perspective, Kenworth is less impacted in its local economy than it is from a global economy. “Not so much in the Pacific Northwest, but since we deal across the country, the construction industry as a whole has been down,” he says.

Lindgren reports that sales were down last year. However, he says 2006 was a record year. For 2008, Kenworth expects sales will be “more normal.”

The have-crane/will-travel philosophy of Logan Crane Service has provided the company an interesting niche. It has utilized its one unit, a 540 Grove (40 ton) 1998 hydraulic truck crane, in performing several unique tasks. The company business is run from Christopher and Robin Logan's home in Medford, OR.

Logan says that business has been steady for him and daily he receives new calls. He uses his crane, which he bought used from Empire Cranes, to do everything from construction, demolition, tree removal, spa setting and swimming pool construction, light bridge work, and some machinery moving. Recently, the company even lent its crane services to a WPGA's Golf Curtis Cup Tournament at Bandon Dunes, located in Bandon, OR.

If the strong work streak for Logan continues, he plans to purchase another crane with more boom than his Grove's 90 footer. He says he also may hire another worker.

“I see next year as being better than this year. I plan on increasing my income by 25 to 50%. A bigger crane gets more money for hourly rates,” he says.

Ken Day, vice president of marketing for Ness Cranes Inc. and Campbell Crane & Rigging Crane (located in Seattle and Portland, respectively), reports all around strong business. Ness roughly does 70% commercial work, with the balance industrial work; Campbell is closer to 50/50 ratio of work between commercial and industrial.

Ness is a full service operated crane rental company that has been in business for 55 years approximately. It performs 70% commercial jobs with the balance in industrial, with 90 full time employees. Campbell has 65 years of business with a staff of around 80 people.

“Ness had the bigger hydraulic boom machines; Campbell is bigger lattice boom machines. This allows us to handle the work,” says Day, who reports that the economy has been strong in the Pacific Northwest for several reasons: He says the weakening of the US dollar has made more for a sellers market, contributing to a lot of export “gone over the docks.” He also cites the software industry and Boeing as contributors to a healthy market.

“Personally I don't see a slowdown in the next few years but it can change in a heartbeat,” says Eric Snell, president of Snell Cranes located in Olympia, WA. “It seems like it's [the Pacific Northwest economy] pretty good. Seattle's building like crazy and things are moving on the outskirts, and that's where we're at.”

Recently, the company purchased a new 300 ton Terex AC 250. According to the manufacturer's Scott Dighans, western regional business manager for Terex Cranes North America, the Pacific Northwest is on the drawing boards for expansion.

“We are looking to reestablish distribution up there,” Dighans says. “Years ago we had people representing the product, which has changed over the years. We're reevaluating how we want market up there.”

Omega-Morgan Rigging & Industrial Contracting reports a solid workload. The company, based in Tacoma, WA and part of the Omega family of companies, has kept very busy. In October, it wrapped a two year project which required replacing all the dated transformers in the Columbia River for Chelan County in Washington.

“The economy is really thriving. We've seen an upward turn in aerospace and of course the power industry is booming (wind turbine, wind mills, the gears that work all that). We specialize in the rigging and transport of the larger transformers,” says Omega-Morgan's Troy Tallent, vice president. He says all of his customers have reported steady work for the next decade. The company has just signed a two-year contract with Grant County PUD to move all the transformers. Additionally, the company is now getting into tower crane erection.

President Jeff Morgan says the recent flooding activity along the coast of Oregon will present new work for the company. “This is the busiest December we've had in the Northwest. Here in Portland, we're all working.” 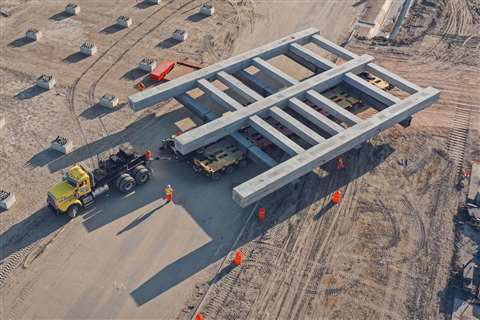 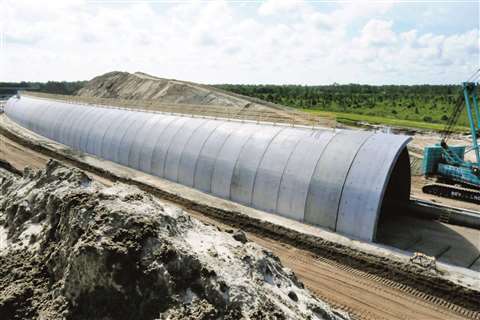