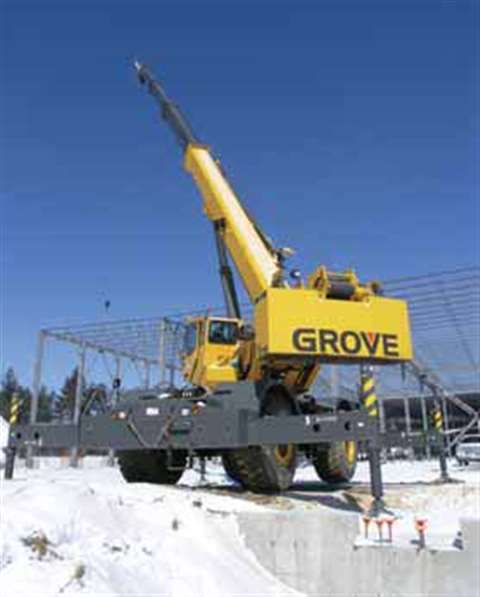 With its lifting capacity of 75 tons and a maximum tip height, with jib, of 232 feet, the Grove RT875E is being used for steel erection work on a Dunkin Donuts warehouse in Massachusetts

A long the 49 mile, four-lane stretch that is taking shape as the new SH 130 Turnkpike through Central Texas, some eight rough terrain cranes start work at dawn each morning and are often still working as dusk creeps over the Hill Country horizon. While a host of large-scale crawlers, all terrain-cranes and truck cranes are routinely needed along the winding thoroughfare to lift and place bridge spans, culverts and to perform related heavy lifting, the workhorse RTs are long-term residents on the job, having been on site since the project broke ground more than two years ago.

Rough terrain cranes have long been the ideal crane for long-term highway construction projects throughout North America, where demand for these machines is always steady, and over the last year, record breaking.

Lone Star Infrastructure, the consortium of contractors building SH 130, purchased eight Grove RT760 E rough terrains for the project, of which the first phase is slated to finish up by year-end, a year ahead of schedule. The 60 ton capacity Groves have worked up and down the project, assisting with bridge work and acting as pick and carry units to move materials around the job site. Rare is the day that these machines aren't performing some sort of task on the $1.5 million project.

Like most other crane classes, the biggest problem with the market for RTs right now is there aren't enough of them to meet demand. In addition, there is a new development in the market for this machine.

“The biggest thing that is going on with the RT is that the export business for this machine has picked up,” says Doug Myers, product specialist for Grove Worldwide. “About 40% of our market for RTs is export. It has increased dramatically in the last couple of years. We are delivering an awful lot of RTs to other countries, and even some into Europe, which in the past has been an AT market.”

Over the last year, Grove has sold RTs en masse to companies throughout Mexico, Central and South America, Myers says. “There's a lot of mine work and oil work, mineral mining and oil fields, down in South America,” he says. “That's what most of the RTs that we are selling are being used for.”

Wally Jones of Stafford Equipment in Richmond, VA, says that his company's export business is booming, especially in the RT sector. “We've sold a number of Terex RTs in Buenos Aires [Argentina], in Lima [Peru] and even in Africa,” he says.

In South America, Jones explains that contractors there don't have an allegiance to any type of crane and, because they are cost effective and easy to operate, the RTs are sought after. “Plus, anytime there is an oil field or oil refinery or pipeline in proximity, the work lends itself to an RT because of its ability to move and negotiate rough terrain, up and down hills, mud and sand.

Both Grove and Terex have begun to break into the European market, mainly because both companies are now building RTs on that continent.

Jones says Stafford has sold Terex RTs to customers in Germany, a huge feat considering that Germany has such a strong allegiance to the all terrain crane.

For Manitowoc, the market for RTs in Europe has also picked up in Spain, Italy, Germany and France. “Now that Manitowoc has a facility in Italy that is assembling our 30 ton RTs we are able to break into some markets in Europe, some to Germany and some into Holland,”s Jones says. “The Europeans are starting to the RT as a less expensive lifting appliance over their normal all-terrain crane. It's less expensive and not quite as technically advanced, and not as hard to repair and maintain. I do think we are seeing a trend toward a market for RTs in countries besides the US and Canada.”

Back in the US, Jones says Stafford can't get enough new machines due to manufacturer backlogs. The company also carries the Tadano America RT line. “I've been in this business for 37 years and I've never seen it this hot,” he says. “We started to notice it at the start of 2005. Last March we sold 21 new and used RTs alone. It continues to escalate.”

Stafford has been the beneficiary of several large-scale orders for large-scale projects up and down the East Coast, including the new Woodrow Wilson Bridge project in Virginia and Maryland. “We're selling them to bridge contractors, highway contractors and crane rental houses, to companies along the Gulf Coast for oil platform work and to companies doing fabrication and mining work up in Canada. It's a very wide swath, the market.”

With its ease of transport, ease of operation, ease of maintaining and ease of maneuverability, the rough terrain crane is a machine that is difficult to perfect. “It has the ability to pick up a load and move it to another place,” says Jones. “You can set up the outriggers and zip up the boom and place what you need very easily with these machines.”

Jones says that the most popular RTs on the market are those in the 55 to 75 ton capacity range, although there is demand on the smaller and large end of the capacity spectrum.

Link-Belt Construction Equipment Company introduced its RTC 8065 to the market last September, and Rick Curnutte says demand for the 65 ton capacity machine has been like “gang busters,” with market acceptance very positive. That machine has an especially deep backlog, he says.

“We are building all we can for the RT segment of the market,” Curnutte continues. “They have been especially popular as rental fleet machines.”

Road, bridge and highway work continues to be a strong end use for RTs and Curnutte doesn't expect that to stop, mainly because of the recent funding provided throughout the country through the SAFET-LU legislation.

“It's amazing the amount of highway construction going on throughout the US,” he says. “Road construction is going to be a huge market for several years and the RTs are ideal for this type of work.”

Curnutte says business has also picked up for Link-Belt in Canada and Mexico, and that the company had to begin translating product manuals into Spanish to meet the needs of Spanish-speaking customers and end users.

“The beauty of the RT is its versatility and durability,” says Curnutte. “You can move them in one load and they can be up and working in a short time.”

Link-Belt's RTs have also impressed owners of some of the largest crane rental companies in the US, with the company recently selling machines to All Erection, Maxim and Am-Quip. “We are getting orders from the larger companies, and not just one or two,” he says.

But, conversely, the biggest issue for all manufacturers is availability. “We are battling component problems,” Curnutte says. “We are geared to ramp up even more if we could get the components we need to build the machines we need to build.