Rounding up the latest all terrain crane jobs

All terrain cranes are mobile, agile and a rental fleet rock star.

The all-terrain crane product line showed up in North America about 30 years ago. But they were not an overnight sensation. It took almost a decade for these cranes to catch on across the continent.

The beauty of the AT is the boom length and luffing jib, according to Tadano’s Ingo Schiller.

“For early customers of AT cranes, maneuverability was important but the capacity of the crane that the long boom offers is what it’s all about,” Schiller said. 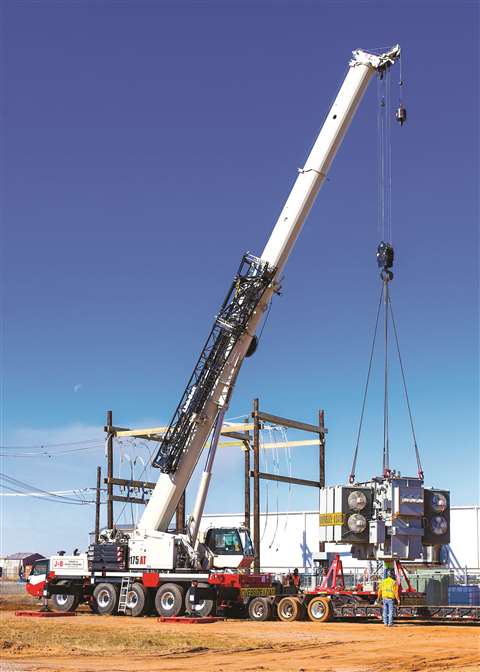 The AT wasn’t a thing in the U.S. until the three German manufacturers that made these cranes – Demag, Krupp and Liebherr – developed models that were street legal in the U.S., Schiller said.

“For Demag it was the AC 265, Krupp the KMK 5120 and Liebherr the LTM 1120,” Schiller said. “These were the early five-axle machines that were road legal with a dolly in many states and provinces.”

Adapting to the market

“These were the three shepherds of ATs in the United States,” Schiller said.

When 2000 dawned, while there were already several hundred all terrain cranes in North America, crawler cranes were still the higher capacity lifting solution, Schiller said.

“But then Liebherr came out with the LTM 1500, which set the new standard,” he said. “Five-hundred and 700-ton capacity ATs are now available from several makers that compete with the crawlers. The reason you bought one over the other was the duration of the job. If it’s a short job, the commercial advantage often goes to the AT. If it’s a longer project, the advantage goes to the crawler.”

ATs succeeded in the U.S. because there were three strong engineering teams going after the market and adapting their products to meet the diverse requirements of the North American road laws, Schiller said.

Realizing the potential for the AT product line, Terex, Manitowoc and Tadano started making their moves.

And the rest is history. Grove bought Krupp, and Manitowoc bought Grove. Terex bought Demag, and Tadano acquired Faun, which made all terrain crane chassis. Since then, Link-Belt developed its own AT line and Tadano purchased the Demag line from Terex. Today, four OEMs produce ATs for the American market – Liebherr, Link-Belt, Manitowoc/Grove and Tadano.

“The reason we have them in our fleet is their versatility,” said John Anderson, president of NessCampbell Crane + Rigging, based in Portland, OR. “They travel up and down the road with ease, they assemble quickly and have long telescoping booms. They have great attachments like luffing jibs and capacity attachments like Y Guys or Mega Wings. These cranes are great for rental companies like us where our AT cranes may be on a different job every day of the week.”

Mobility and capacity drive the AT market today.

“All-terrains have a great place in the crane rental industry since they can mobilize in and out of jobs quickly and competitively, helping to keep projects on schedule and costs within reason,” said Dane Bortzfield, project manager of the Greiner Industries crane division, based in Mt. Joy, PA. “We utilize our all-terrain cranes to work with a variety of customer types as they can often rig up very efficiently and with minimal setup space.”

ACT rounded up a few recent all terrain crane jobs around the country.

NessCampbell at work in Washington

NessCampbell recently dispatched its 130-ton capacity Liebherr LTM 1120 4.1 to set equipment inside of the spillway at the Swift Dam in Cougar, WA. The crane was rigged with 100 feet of main boom and 68,300 pounds of counterweight at a 15.6 foot radius. For setting the spillway equipment the crane was rigged with 11650 pounds of counterweight at an 85-foot radius. 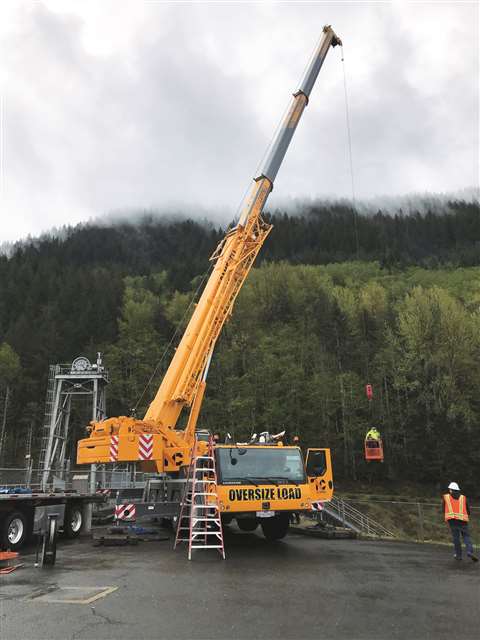 NessCampbell’s 130-ton Liebherr LTM 1120 4.1 set equipment inside the spillway at the Swift Dam in Cougar, WA.

Because the crane was working on a dam with weight restrictions, there were several challenges to overcome, Anderson said.

“We were working in a very tight set up area,” he said. “Using the Liebherr’s VarioBase outriggers system allowed us to meet the customers space requirements.”

Oklahoma City-based J&B Heavy Haul recently assisted with a transformer changeout at a gas plant in Northern Oklahoma. The scope of the job was to haul a temporary unit in, remove the damaged unit with their crane and then haul it to the repair facility. The temporary transformer was then lifted by the crane and skated into position.

“We took delivery of the new transformer and hauled it to the jobsite where we used the Link-Belt 175|AT with maximum counterweights to hoist the old unit out of the substation and install in the new one,” said J&B’s Tra Neal. “We also hauled the old transformer to get repaired.”

The transformer weighed 80,000 pounds, so by using the 175|AT with all the counterweights, they were able to stay well within the capacity of the crane, Neal said. J&B also operates a large fleet of specialized trailers. 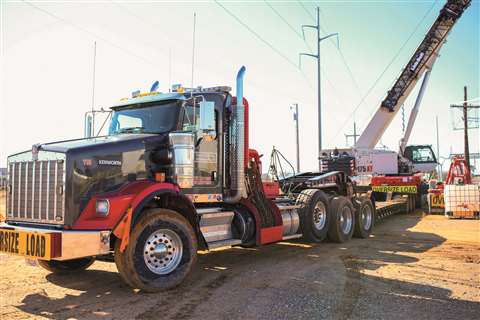 J & B Heavy Haul used its Link-Belt 175|AT to replace a new transformer at a power plant in Henning, OK.

“We had to use a 50-ton lowboy for its capacity and its ability to keep the unit as low as possible,” Neal said. “The main challenge of transportation on this project was the fact the piece was 12-feet wide.”

The Glass City Riverwalk project is progressing rapidly with the installation of a new 101,000-pound bridge. The 110-foot-long, 20-foot-wide bike and pedestrian bridge over Main Street in East Toledo connects a new trail at Glass City Metropark with an existing trail at International Park.

Mosser Construction assembled the bridge in the adjacent lay-down yard. Capital City Crane provided a Grove GMK 7550 and a rigging plan to pick the pre-assembled bridge from the lay-down yard and set it to already completed abutments, spanning over Main Street. 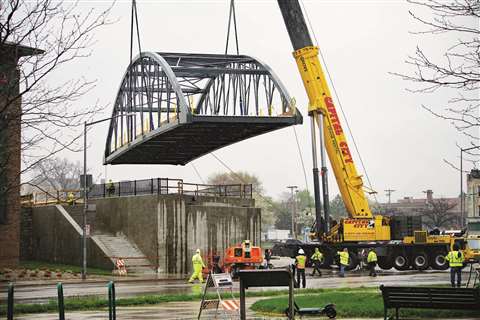 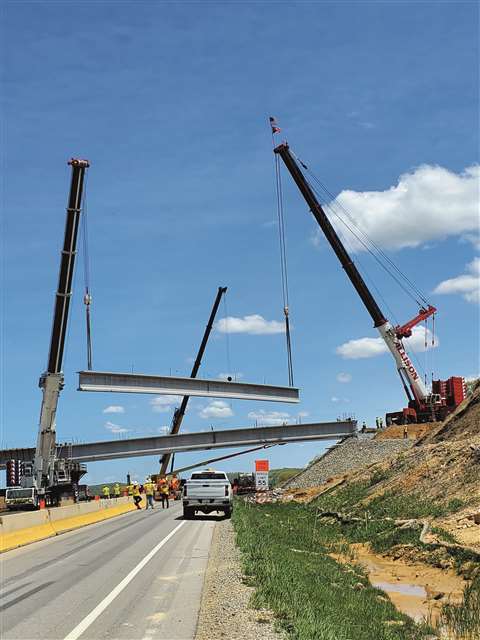 Greiner Crane and Allison Crane & Rigging were contracted through Kee-Ta Quay Construction and HRI. The beams were provided by PennStress. Each beam weighed approximately 177,000 pounds with each crane’s pick weight at 93,000 pounds. Greiner provided its Tadano Demag AC 500-8 for the project, rigged with 308,600 pounds of counterweight and 124 feet of main boom.

“These all-terrains were perfect for this project as the job required multiple on-site crane moves while still efficiently setting all of the beams,” said Dane Bortzfield, project manager, crane division, Greiner Industries, based in Mt. Joy, PA. “Between both cranes, we performed three on-site moves and erected all the beams in one week’s time.”