Strand jacks have never been used on this scale before in bridge construction, according to Pete Ashton, vice president of major projects for Bigge.

On the Oakland side, strand jacks were to be mounted on a mobile jacking platform supported by a pair of 60 foot girders, cantilevered 28 feet off the bridge deck. For this span, Bigge is using four strand jacks, each of which has a lifting capacity of 365 tons. Each jack pulls on a bundle of 31 strands, with each rope 0.62 inches in diameter.

On the San Francisco side, two steel lifting towers were constructed. Bigge is furnishing two girders that span 125 feet across the top of the lifting towers, and strand jacks were being mounted on top of a mobile jacking platform that sits on the girders.

Both of Bigge's jacking platforms are capable of synchronized 8–inch longitudinal and transverse movement. For this span, six jacks of 235–ton lifting capacity were to be used. These jacks have 19 wire rope strands, each 0.62 inches in diameter.

All of the jacks will be synchronized for simultaneous operation and load control within 1/32 inch. “No traditional crane, particularly a barge-mounted one on the water, could do this job with the required combination of lifting capacity and precision,” says Ashton.

Based in San Leandro, CA, Bigge is the exclusive representative of the Dutch manufactured Hydrospex strand jacks. 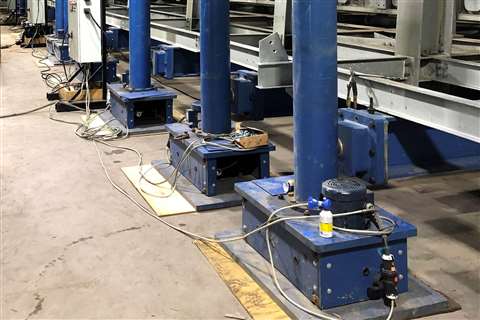