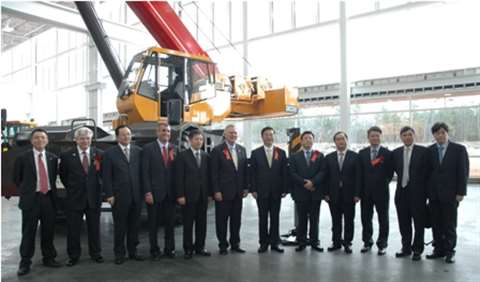 Sany America dignitaries and the Governor of Georgia celebrate the opening of Phase One of the company's new manufacturing facility in Peachtree, GA.

On Monday, February 28, 2011 Georgia Governor Nathan Deal was joined by Hunan Provincial Governor, Qiang Zhou, to celebrate the opening of a Sany factory in the USA.

The opening of the first phase of Sany America's new assembly plant in Peachtree City, GA was at a ceremony in late February. Georgia Governor Nathan Deal was joined by Hunan Provincial Governor Qiang Zhou to celebrate the new construction of the new facility.

As part of the ceremony, Governor Deal and Governor Zhou were joined by Sany Chairman Wengen Liang to present Sany America's SRC860 rough terrain crane, one of the products that will be manufactured at the Peachtree City facility.

In addition to manufacturing, the facility will also house sales, engineering, testing, service, and parts distribution, plus serve as Sany America's corporate headquarters.

"The SRC860 is the first US-tailored product designed by a joint Chinese/American team at Sany," said Richard Hunter, cranes product manager. "The 60-ton class is the highest volume RT market in the US, and the SRC860 from Sany is positioned well for performance, reliability and transportability. It will be joined by two more RTs, the SRC840 and SRC860XL, that will be introduced at ConExpo later in March."

The capacity of the SRC860 is 60 tons at 10-foot load radius. The 4-section main boom has a maximum length of 113 feet. With a 53-foot bi-fold jib, the crane's maximum tip height is 172 feet. A fully optioned machine weighs less than 90,000 pounds. The 10-foot, 10-inch width allows the crane to be moved for minimum costs. The SRC860 has a 250 hp Tier-3 Cummins engine, Dana Powershift transmission (6 speed forward and reverse) and Axletech axles. The standard tires are Bridgestone radials (29.5R25).

"The completion of Sany America's facility signifies a new milestone in Sany's globalization initiative," said Fugui Zhou, chairman of Sany America, Inc. "The new facility will enable the company to provide the North American market and the other global customers with superior products and services."

The end of the first phase of construction marks completion of the company's main infrastructure. Production at the 420,000-square-foot facility starts later in 2011. Sany America has made a $60 million investment through the completion of phase one, the company said.