SC&amp;RA Job of the year: Extreme bridge makeover in Shreveport, Louisiana, US 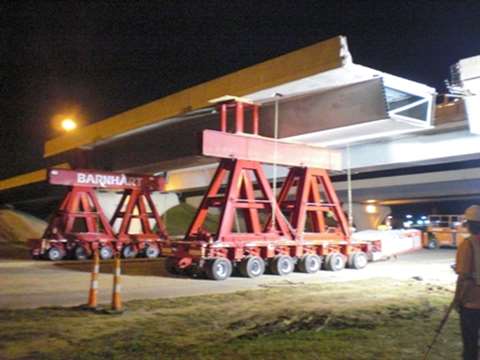 Barnhart was called in when the girder section of a bridge in Shreveport, LA was struck by a tractor-trailer carrying a wind turbine tower base. The damaged bridge section needed to be removed from a highway overpass and then replaced with a new box girder section.

At first glance, the bridge replacement appeared to be a relatively simple job that would require the use of cranes and trucks. But as the customer began to describe the method they intended to remove the girder, and the time frame in which they wanted to remove it, Barnhart realized this job would require more than just cranes.

The DOT engineering firm wanted to remove the entire section of bridge at one time due to the time constraints in order to keep the interstate open.

The main scope of work was to provide labor, equipment and supervision to remove the damaged section of bridge; transport the damaged section to be offloaded; install the new girder with a 300-ton capacity crane and hold it in place until the girder flanges could be installed. The amount of time allotted was 15 hours. Yes, 15 hours.

To accomplish the job safely and efficiently, there needed to be some structured safety systems in place. Because crews would be working at a height of more than 6 feet, by OSHA law, men would be required to tie off using safety harnesses.

Basically, the roadway would be shut down at 8 p.m. on Friday and would need to be reopened no later than 7 a.m. Sunday morning. This created some interesting challenges to say the least. Among the other challenges was the task to determine the weight of the bridge girder. Plus there were concerns about such a heavy load being removed from a height of roughly 18 feet.

Barnhart found that the center of gravity was not centered under the concrete decking, creating an unstable condition. Shoring would be required under the section of decking. Barnhart also had to calculate the amount of deflection that would be acceptable to insert new box girder.

During prework meetings, the state DOT was concerned about what would happen to the remaining ends of the bridge once such a substantial load was taken off of the girders. In order to do this, the weight of the section to be removed had to be calculated to determine the amount of stress it was exerting on the north and south ends of the bridge. If the ends deflected too much (more than a half inch was considered unacceptable) then the new girder could not be installed properly because none of the bolt holes would line up for the flange to be installed. After careful planning and calculating, it was determined that once the piece was removed, the remaining bridge sections would be far enough from bridge piers and caps and have enough concrete decking on them to keep the steel girders from deflecting upwards.

Once all of the concerns were addressed Barnhart devised a plan to complete the project. The project was broken into three parts, with the first the removal and transport of the damaged bridge section; the second the offload of the section with two cranes; and third the installation of the new girder. And again, this all had to be performed over the course of a 15-hour work shift.

Barnhart provided a rigging technique using the principles of Accelerated Bridge construction (ABC) to replace the bridge section. Since they had two lanes of road way to work with, two 250-ton Goldhofer trailers would be placed perpendicular to the bridge under each end of the damaged section. This method would ensure the highest amount of stability and safety by allowing the center of gravity to remain between the trailers, and it would keep all equipment in a safe capacity to handle the load. Barnhart used two 6-line PST-e trailers equipped with a power-pack for each as well as two 10-foot shoring stands per trailer to remove the damaged bridge section. The team then positioned either trailer at each end of the road section and linked the two trailers together through a data cable.

After the team secured the bridge section to the trailers and removed bridge rebar, they moved the trailers away from the existing bridge. They took the damaged section to the hooks of the 300-ton and 165-ton capacity cranes that were positioned approximately 100 yards away. Barnhart then used the cranes to off-load the section from the Goldhofer and lower it to the ground for demolition.

After Barnhart removed the old bridge section from the Goldhofer, the team moved the 300-ton crane to a new position in front of the bridge where they re-rigged it to pick up the new box girder and install it into the bridge.