SC&amp;RA Job of the Year: Moving an historic building in Salt Lake City, US 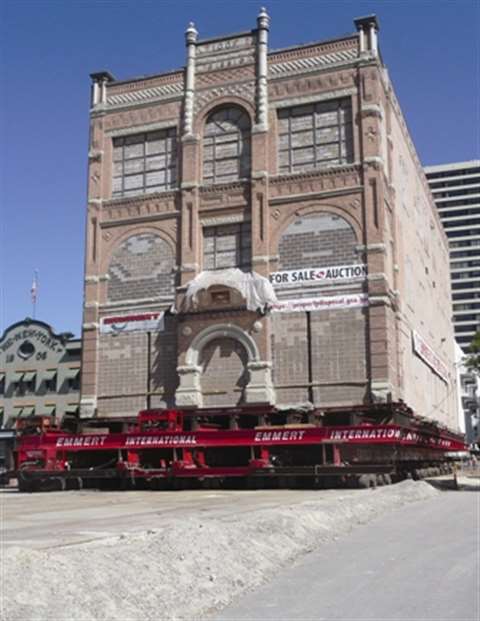 Some people said it couldn't be done, moving an historic building in Salt Lake City. But the team at Emmert International reminded the naysayers, 'never say never.' Terry White reports

Emmert International has earned an enviable reputation for complex moving and lifting jobs that span thousands of miles across many states despite such obstacles as extremes in temperature and terrain. Accordingly, the company had won two dozen SC&RA Job of the Year Awards going into this year's competition. They were hoping Number 25 would come in 2010. It did. And so did Number 26.

Clackamas, OR-based Emmert garnered one of its two awards in the Hauling Job category for a move that extended one city block in Salt Lake City, UT. The project involved the relocation of the Odd Fellows Hall, which stood on the site of the planned expansion of a federal courthouse. Built in 1893, the beautiful old structure held such historical significance that the Utah Historical Society felt compelled to move the entire 5-million, pound, 3-story brick-and-mortar structure to an adjacent property rather than tear it down.

During the bidding process, numerous contractors remarked: "Impossible!" Emmert disagreed and walked away with the contract.

Preliminary engineering study indicated that the façade had settled at various locations, potentially introducing additional forces into the cast iron columns. Armed with this information, Emmert optimized the placement of the steel support structure and strategically positioned wood shims so that no additional stresses or movement was introduced into the façade structure during the move.

To fortify the building, windows and doorways were in-filled with concrete block, interior supports installed, brickwork pointed, and fire-escape stairs were braced with rebar and shotcrete. Emmert's team carefully documented hundreds of cracks and misalignments in the brickwork, as well as other deterioration from the buildings base to its roof structure.

Holes cut into the walls of the building and trenches dug beneath prepared the building for installation of the structural steel framework designed by Emmert to provide support during the lift and move. Emmert designed and fabricated custom hydraulic jacking for the five main beams, extending 137 feet.

Positioned beneath the building, each main beam held a dozen 168-ton hydraulic jacks, installed inverted inside the beam and hard plumbed. After placing the main beams, Emmert welded on 25 modified 58-foot cross beams at a perpendicular angle for additional stability. Then sill beams were placed inside and outside the building in a parallel configuration to the existing walls, and needle beams placed perpendicular to the walls.

Crib blocks, wedges and shims filled the area between the beams and the building. Emmert used three customized double-acting pump machines, each placed at three hydraulic zones along structural steel framework. Pressure equal to 80 percent of the building's weight of the building was applied to the exterior walls of the building.

After preparing the soil to 98 percent compaction, Emmert covered it with steel plates to allow the building to be moved and spun 180 degrees. Emmert then moved the building west by winch truck with steel cables, sheave blocks, shackles and straps, strategically rotating the dollies in a circular pattern to orient the building for its new home across Market Street.

Emmert duplicated its hydraulic jacking towers at the original site of the Odd Fellows Hall for the building's new home. Because the basement level of the nearby restaurant and the new mat foundation were both 10 feet lower than the elevation of the haul path, and because an existing road East of the new foundation could not be closed, significant adjustments were made.

This required the support steel and hydraulic system for the building to be placed underneath on one side and extended outside the wall on the other. The available clearance for the rigging on the west side of the building was limited. Emmert only had a half inch of clearance between the cables and an existing building. Emmert's rigging had 6 cable lines on each side of the Odd Fellows Hall, for a total of 12 lines. The pull had to be stopped and the rigging had to be adjusted every 4 feet because of the tight clearances.

Once the pull to the north across Market Street was complete it took two days to rotate Emmert's wheeled hydraulic dollies, align the winch trucks, and set up the rigging for the pull of the building over the site of its new foundation. It was lowered inch by inch, averaging 6 inches to 12 inches daily until reaching the precise, predetermined elevation. After the general contractor built the new foundation and the concrete cured properly, Emmert returned to Salt Lake City and released the weight of the building onto the new foundation.

Emmert safely completed the relocation with no additional structural damage or cracks. For years to come, Salt Lake City citizens will continue to enjoy Odd Fellows Hall-as well as memories of the company that saved the historic building through the strategic use of technical skills, engineering expertise and specialized equipment.