SC&amp;RA Job of the Year: Replacing a reactor head at a California nuclear power plant 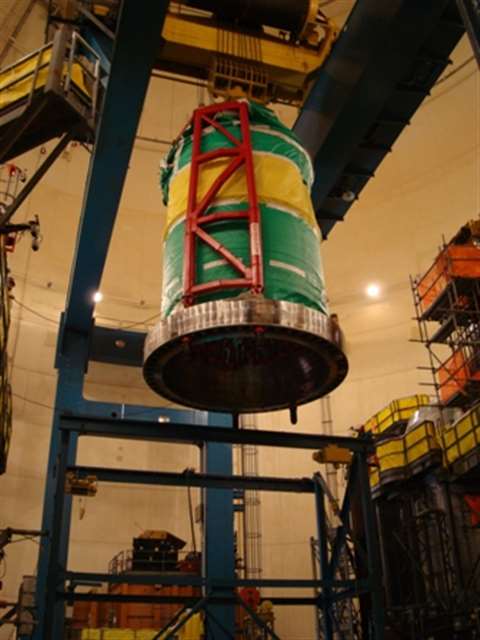 For more than two years, Barnhart Crane & Rigging prepared for its entry into the nuclear power plant market. The company's first job replacing a nuclear reactor head at a California nuclear power plant was complicated, tedious and successful, thanks to copious pre-planning and pre-testing every element of the project.

Barnhart provided a heavy lift system, custom rigging solutions and engineered rigging to perform the job. Tight clearance, seismic design requirements and a critical path schedule all added to the demands of the job.

Barnhart's task was to lift the Replacement Reactor Vessel Closure Head (RRVCH) using the Outside Lifting System (OLS) and "shoring platform." Both the OLS and shoring platform had to be designed for high seismic loads (earthquake loadings) to assure the nuclear facility's exacting requirements.

Barnhart lifted the RRVCH from transporters at grade level with the OLS using a 650-ton strand jack. Once the RRVCH had cleared the handrail of the shoring platform, the 300,000 pound load was slid laterally, and then lowered onto a Goldhofer system that had been loaded atop the shoring platform.

Barnhart crews then chained the RRVCH to the trailer, drove it through the fuel handling building at the plant, and then staged it in front of the Unit 1 containment building where it remained until the next replacement was completed.

Each structure was designed to be able to survive if an earthquake hit during the lift. Assuring every move was "earthquake proof" required an extreme amount of engineering by Barnhart crews. Barnhart installed large seismic bracing in both directions to absorb the loading into the shoring platform. Favco tower sections were used with the OLS to absorb the seismic loads.

At its facility in Memphis, TN, Barnhart engineers custom designed the Head Rigging Frame (HRF)-the red truss around the reactor head for this project-to very tight tolerances and nuclear specifications. The HRF was used to lift the reactor head in both the horizontal and vertical positions as well as to serve as a connection to the custom upender constructed for use inside the containment building.

Safety was a number one concern in all phases of the project, and radiation exposure was a constant concern. All the necessary precautions were taken, including cleaning equipment used and assuring proper handling and clothing by personnel.