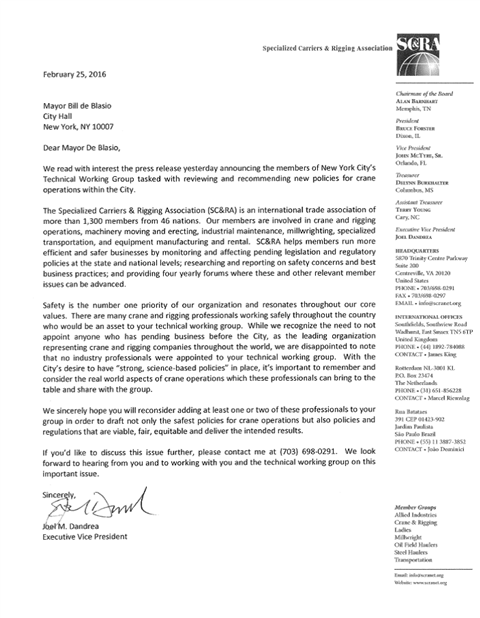 On February 24 New York City Mayor Bill de Blasio and Buildings Commissioner Rick Chandler announced the creation of the New York City Crane Safety Technical Working Group that will be tasked with reviewing and recommending new policies for safe crane operations within the city. Of the five people named to the Crane Safety Working Group, none represent the crane industry. The group was formed in response to a crawler crane collapsing in Lower Manhattan on February 5, 2016.

In response to this announcement, Specialized Carriers and Rigging Association Executive Vice President Joel Dandrea sent a letter to NYC Mayor Bill de Blasio stating “as the leading organization representing crane and rigging companies throughout the world, we are disappointed to note that no industry professionals were appointed to your technical working group.”

Dandrea asked for de Blasio to reconsider adding at least one or two of these professionals to the working group “in order to draft not only the safest policies for crane operations, but also policies and regulations that are viable, fair, equitable and deliver the intended results.”

“Safety is the number one priority of our organization and resonates throughout our core values,” Dandrea said. “There are many crane and rigging professionals working safely throughout the country who would be an asset to your technical working group.”

Dandrea said he understood the need to not appoint anyone who has pending business before the City of New York.

Over the next 90 days, members of the Crane Safety Technical Working Group will evaluate circumstances surrounding the crane collapse that was being lowered and secured due to heightened winds, according to press reports. One person was killed when the long boom of the crane fell to the street.

According to the press NYC Department of Building (DOB) press release, the Working Group will “propose additional best practices and regulations to make cranes operating in New York City the safest in the world.”

The technical working group will consult closely with stakeholders across the construction industry and workforce as it crafts recommendations, the press release stated.

Following the crane incident the NYC Department of Buildings implemented several directives for crawler crane operation, which include:

New Restrictions on Crawler Cranes: Until further notice, all crawler cranes are required to cease operation and go into safety mode whenever steady winds are forecast to exceed 20 mph or gusts to exceed 30 mph. Through rulemaking, DOB is raising the base penalty for failure to safeguard cranes from $4,800 to $10,000.

More Sidewalk Protection for Pedestrians: The Fire Department NY and the Department of Buildings have increased enforcement of sidewalk and street closures related to crane activity, including the requirement that pedestrian traffic managers are present when large cranes operated in areas with significant pedestrian traffic. In addition, DOB is conducting inspections and issuing violations to crane firms, operators and other personnel if flaggers are not appropriately restricting pedestrian and vehicular traffic. 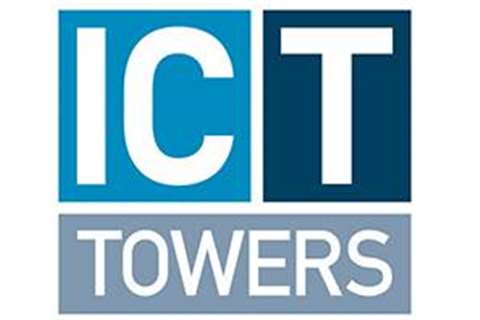