SC&RA announced the winners of its 2020 Job of the Year Awards during an online award presentation hosted last week. The Association held the competition virtually this year due to cancellation of its Annual Conference in April. 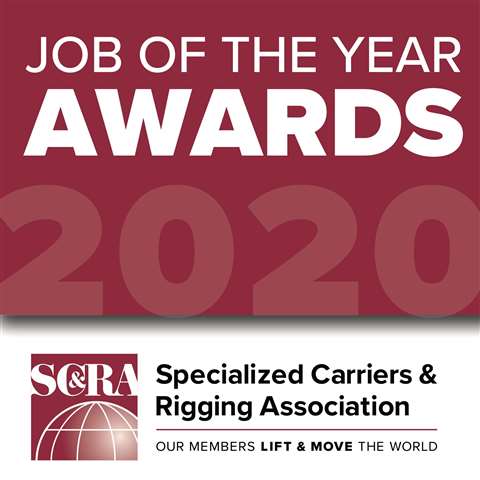 The Rigging Job of the Year competition recognized four projects that illustrate the expertise and talent needed to meet the most daunting and imposing professional challenges encountered in rigging. The winners were judged on safety; innovation; ingenuity; complexity; engineering and planning; and commercial terms/limitations. The winners are:

Under $150,000: Barnhart
Barnhart removed and replaced a 6,000-pound bellowseal guillotine damper at a cement plant.

$750,000 - $2 Million: Barnhart
The Barnhart team removed and replaced two feedwater heaters from inside a reactor building.

The Hauling Job of the Year competition judges graded on exceptional skill and superior ability when meeting some of the most difficult professional challenges encountered in hauling. The following members were recognized for shipment routing, planning, overcoming physical elements, and safety considerations:

For more details on these projects and all entries, including interviews and photos, watch for future issues of American Cranes & Transport Magazine and International Cranes and Specialized Transport.