Construction and transport are utilizing drone technology in ever-increasing fashion. High-resolution imagery and video allow companies to market visually stunning projects, make the most of digital mapping and data storage and even inspect jobsite challenges on a moment’s notice.

Recent industry numbers indicate that nearly 60 percent of construction and/or transport companies take advantage of drone technology in some capacity. In addition to pushing a company’s photo/video game to the next level, drones boast tremendous data-collecting capability. 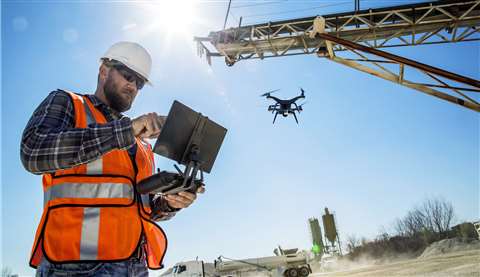 And the construction industry, especially, is paying attention. According to industry-insider DroneDeploy, in the last year alone, drone use has exploded nearly 250 percent within the sector.

At this point, the value and ROI that drones can enable on construction sites or transport projects has been explored in great detail, and the difference they can make in a variety of applicable environments is undeniable. However, these distinctions aren’t really about drones themselves, but instead about the data they’re gathering.

Drilling down on that data, and what it can do for your business, could very well give you the edge you’ve been looking for, or at the very least, organize and modernize your operational processes to the extent that you’re much better off than before.

Staying in the loop

One benefit of using drone technology is that it provides you with more accurate and transparent estimates – i.e., it can help create accurate pre-job surveys so you don’t have to rely on satellite imagery or bring in a third-party surveyor and then have to wait for the results. That said, the same information can also help subcontractors better prepare their estimates. Some companies report that drone surveys can be done ten times faster than traditional topographic surveys.

The 3D design capability that emerges via drone tech is also extremely valuable when utilized as both completed work or real-time, visual progress reports to clients. In this regard, drones can produce highly detailed orthomosaic maps (a grouping of many overlapping images of a defined area – processed to create a new, larger, true-to-scale map), point clouds (a set of data points in space, which measure a large number of points on the external surfaces of objects around them), 3D meshes (the structural build of a 3D model), time lapses, 360-degree panoramas and high-resolution videos and photographs – all of which are especially valuable to clients who can’t go to jobsites frequently yet still want to stay in the loop.

Additionally, companies can share such data with external stakeholders, field personnel and office staff for more cohesive communication and to ensure that all parties are privy to pertinent information.

On the reputation side, having all this impressive data and making it available to clients makes you look like a genius – and your company like an industry leader. It also allows you to play a pivotal role in the industry’s future – allowing you to not only maximize the additional reputation that comes with spearheading innovation, but keeping you out in front of the trend(s) that are defining your industry.

The beauty of it is that you don’t need a fleet of drones to start realizing the benefits. In fact, start off with one – learn what it can do for you and how it best fits into your business. Also, get to know the data it produces, and learn to trust that data – embracing it as a new asset in your overall inventory. If you like what emerges, maybe another drone is worth considering.

All in all, it seems that drones have officially (and productively) arrived. Which lends to the likelihood that the next headline you read might ask: How are you operating without one?

C.J. Shaughnessy hoists Magni into jobsite
Getting a Magni telehandler on an apartment jobsite required the use of a crane to lift the machine over the obstacles.
Latest News
Heavyweight speakers join CATME programme
Participants from Saudi Aramco and Hareket added to the speaker programme