Since the April SC&RA Annual Conference has been cancelled due to the COVID-19 coronavirus crisis, SC&RA President Tom Bennington will not be able to hand over the Association gavel to incoming president Jay Folladori at the always-engaging Closing Night Ceremony. At some point over the next year, the ceremonial handover will likely happen, albeit late. 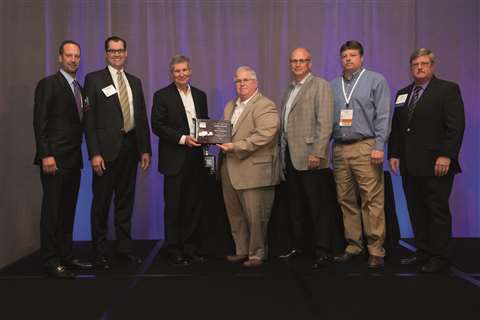 Incoming President Jay Folladori, (center) has earned an esteemed reputation during his 40-plus years in the industry.

A 40-plus-year industry veteran, Folladori, currently vice president of sales at Bennett Motor Express, describes himself as a third-generation trucker. Raised by his mother in Memphis, Tennessee, he eventually attended Arkansas University and earned a bachelor of arts degree before answering the call from his father, an owner of three trucking companies, in 1976.

Like many of his SC&RA friends and colleagues, Folladori took advantage of an opportunity to start on the ground floor at a young age, cultivating the experience, wisdom and leadership skills along the way that would eventually garner him an esteemed reputation and deserved passage through the SC&RA leadership.

Opportunities being what they are, I was recently afforded the chance to discuss life, family, career and even take a glance at the future, with Folladori – a “lifer” in every sense of the word – and perhaps above all else, a man who truly appreciates the many people he’s shared the journey with.

You went to work for your father at Eck Miller Transportation in the late seventies just after getting your degree. how did your role there evolve?

When I started, the company was based in Owensboro, Kentucky, but in 1980, we relocated to Rockport, Indiana, and I worked through very different parts of the company. I spent time in operations; I was a shuttle driver picking up steel bars; I even spent time in the shop learning how to change tires, sandblast and weld. In 1984, my father sold the company and I stayed with the next ownership group. Once the new ownership came together, I spent more time in sales and operational support.

I stayed on with Eck Miller until 1992, and then went to Landstar Ranger in Jacksonville, Florida, as vice president of operations. My family and I moved from Kentucky to Jacksonville in 1993, and have lived in Ponte Vedra Beach ever since. I should point out that during my time with Eck Miller, my son was born in 1980, and my daughter in 1985. My wife and I have been married over 42 years. 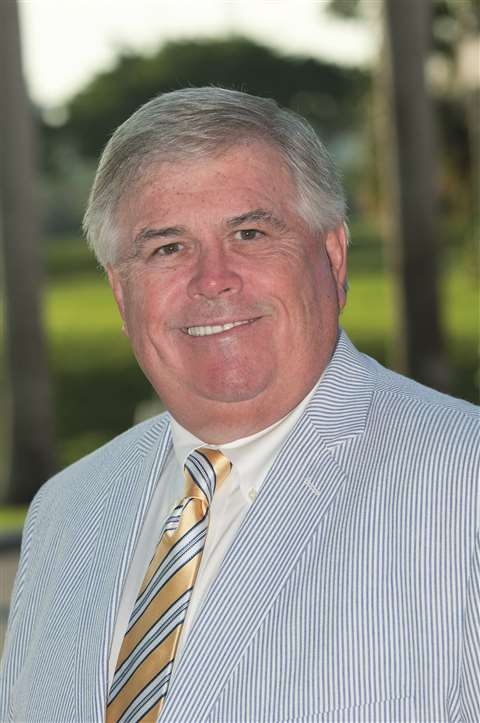 “Passing that knowledge on – explaining to young people that if you want to get things done, these are the people you’ll need to establish relationships with. It makes me proud and makes me want to continue to participate.”

Talk to me about that new Florida chapter – what took you to Landstar?

At that time, the new president of Landstar Ranger was a gentleman named Jim Shepherd. We’d worked together previously at Eck Miller. He asked me to come down and interview. I started off as director of operations, and six months later, I was promoted to vice president of operations. When Landstar consolidated their management group, I chose the position of vice president of operations – asset management, government explosives management and customer service. I consolidated three maintenance departments and three trailer control routes to build an asset-management control and maintenance department. A pretty big undertaking at the time.

I did. Primarily at that point, we were trying to organize our pricing concept – develop a pricing model that we could use throughout a thousand agents that Landstar had at the time. But in 2015, David Lowry approached me at the SC&RA Annual Conference and asked if I would consider becoming president at Bennett. We made a decision to do that in September 2015, and I relocated to the McDonough, Georgia, area – coming home every two weeks to Florida. I basically told David that I would give them five years as president. Due to some health issues currently, I’ve taken a bit of a different role.

Bennett’s reputation for strong company culture is known throughout the industry, but every company still faces INDUSTRY challenges. Can you speak to how Bennett addresses some of these challenges?

All the carriers have been facing a capacity challenge – where to find drivers, owner-operators, we’ve all faced it. I think Bennett has done a good job with recruiting; they’ve built an aggressive safety-bonus program, which not only helps to attract the owner-operator, but also helps in our retention side. Last year, we changed our pay structure, which makes us very favorable when folks are looking to work with Bennett. It puts us in the forefront when people are looking at corporations to lease their truck to.

And David Lowry has been the leader in that regard – he’s seen what the position of the industry is and he has taken an aggressive approach to become a major opportunity for owner-operators.

To that end, what are your thoughts on advances in technology?

Well, it’s really about how companies react to it. Our IT department is very proactive; it’s staying in tune with our driver’s advisory board and listening to what would make their lives more productive and ways they can make more money with our transportation management system. So that’s been a beneficial part – along with our aggressive approach to add commissioned agents and good sales people to our company, which has allowed us to grow. While other companies faced hardships in 2019, we saw nearly double-digit growth.

With more than four decades behind you to speak from, how would you say technology will shape the industry moving forward?

Looking at it from the trucking side, I think if you look at your different sectors of your business, you have to provide your workers with the best equipment you can, the best tools, especially if it enhances communication. And not just verbal, but data. And as far as your customer, you have to give them the ability to understand where their freight is – tracking and tracing – including bill(s) of lading and delivery receipts so they can bill their costs to their customers.

As far as operationally, again from the trucking side, whether it’s through your transportation management system to your agents, or your drivers, the way I always look at it is, the better business tools that you can build, the better and stronger your business will be – and the less costs that you’ll have to maintain internally. So, to me, data means profit.

You’re approaching the end of your time with Bennett, but you’re still very passionate about the industry. What keeps you motivated every day?

Without a doubt, it’s the people – the relationships I’ve built over 40 years. The relationships with people on the state side and people within the vendor side of the business – including our competitors – as well as working on advocacy, support of the youth and leadership programs at SC&RA, especially when discussing with up-and-comers how we did something, how we got it done. Passing that knowledge on – explaining to young people that if you want to get things done, these are the people you’ll need to establish relationships with. It makes me proud and makes me want to continue to participate.

Would it be accurate to say that earlier on in your career, it might have been more about the work and less about the people?

I think in the very beginning, you’re using your intelligence and experience to build a better company, and then somewhere there’s a point where you start thinking about how you can build, say, a relationship with the state, so you can play a role in making change in the industry. That said, I participated in the first harmonization meeting around 2010, which would’ve been the phase one group. You start playing a role outside of your company. You’re building relationships that help your company on a go-forward basis, and when you need support from a state, you can make a phone call and they will listen to you.

That’s a good point. How would you say that same type of thinking has cultivated the relationships you’ve established within SC&RA?

I think, professionally, serving on the transportation governing group and the permit policy group has helped me play a role on change. Professionally, within the industry, building that network of people you can talk to – I can call a guy in Indiana and ask him some questions, and he will give me information that will help me make decisions on how I can support my company. You use the vendors out there – you both ask each other questions. As far as the advocacy part, after we got the states to recognize that we needed to work together to make things better for everybody, those relationships were paramount in helping them understand our issues, and then helping us to understand why they can’t do some things. You then work together to explore what can be done to resolve the issue or pursue another avenue for success.

When did it start making sense to you to consider Working your way through the SC&RA Leadership?

I was approached by John McTyre about going through the chairs. I’d played an active role on the board of directors, the governing group and the permit policy group. I’ve also been developing relationships with the crane and rigging folks. So, I just kind of felt it was the next step – the peak of my career – and then

I’ll kind of move on with my life.

Given the names that have come before you, what does this appointment mean?

They’re great people, great leaders. It’s humbling to think of that list, truly. I just think I have a lot to add in this role – supporting and hopefully promoting change – and I’m honored to play a part in it.

Speak to me a little about making your mark as president.

Well, I think my role will ultimately fall in line with the governing group’s decisions – in terms of how I can support them in their advocacies and the things they need to get accomplished, serving as a voice of leadership for the SC&RA.

With that in mind, what excites you about the future of both the Association and the industry?

I think it’s really the relationships of the people that I work with – listening to their comments and then drawing out more of their questions. And their solutions they would like to see occur – what goes on in the minds of everyone else. At this point in my career, it’s exciting to see what everyone is coming up with and thinking about – moving the industry forward.

As retirement looms, what are you looking forward to most when the time comes?

When I’m not at the office, it’s about spending as much time as I can with my family and my grandchildren. I have two grandsons. Every moment I can spend with them is a precious moment in my life. But for sure, I’m looking forward to retirement. I hope to be in better health and be able to travel and even participate more on the support group(s) with SC&RA and Bennett.