The Specialized Carriers & Rigging Association (SC&RA) announced the winners of the Job of the Year Awards at its 2018 Annual Conference, April 21, at the Boca Raton Resort and Club in Boca Raton, Florida, USA.

The Rigging Job of the Year competition recognized four projects that illustrate the expertise and talent needed to meet the most daunting and imposing professional challenges encountered in rigging. Each winning entry demonstrated ingenuity, diligence, and safe execution. 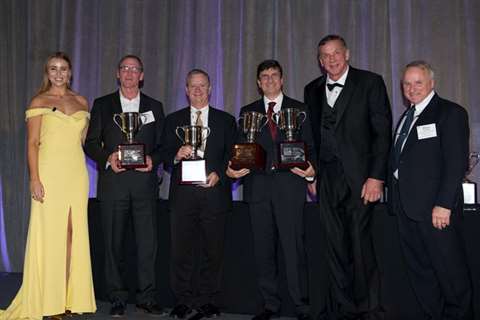 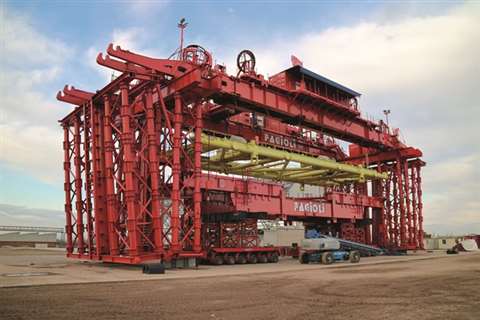 Between 2012 and 2014 Fagioli transported and installed a number of 12,000-ton concrete caissons which were used as bases for the mobile barriers that isolate and protect the Venetian Lagoon from the Adriatic Sea when the tide reaches above established levels.

In 2016 and 2017, Fagioli completed phase two of the project, garnering the award-winning SC&RA Rigging Job of the Year: installing the 19 corresponding 450-ton mobile gates with a Fagioli-built customized launching system.

“After undergoing months of detailed analysis, tests and 3D simulations,” said Edoardo Ascione, president and managing director, “the Fagioli engineering department designed an innovative launching system to facilitate the installation of all 19 mobile gates. The launching system had a lifting capacity of 690 tons, a loading capacity of 870 tons and contained a movable tower system capable of rotating 180 degrees.”

One of the nuclear facility’s two clarifier units – the units which clean water from the Mississippi River so it can be used as cooling water to the plant – was in need of repair. The clarifier tank is a concrete structure with a wall height of 28 feet and an inside diameter of 178 feet. The “clarifier core,” which refers to the rotating equipment in the center of the clarifying tank, was supported by 16 lateral supports and tie rods that attached to the tank wall. The lateral supports had buckled, and ten out of the 16 were structurally compromised. 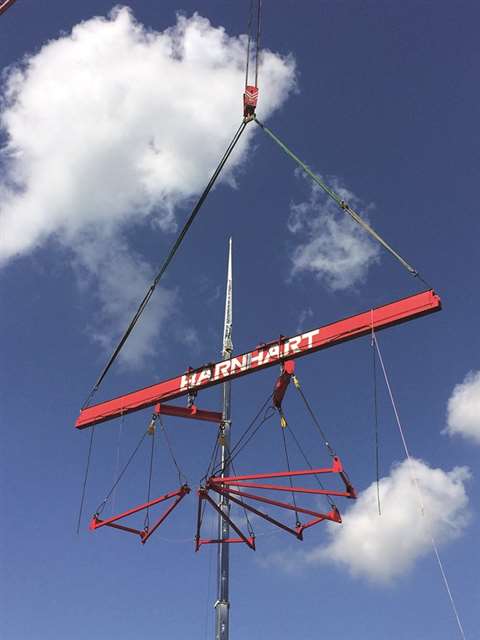 Barnhart’s scope was to provide a lift system capable of lifting from above the 600,000-pound clarifier structure to remove the damaged lateral supports, while also providing crane and rigging support for the subsequent reconstruction of the clarifier unit.

From June to September 2017, Fagioli was involved in a challenging operation in Romania for the lifting, skidding and jacking down operations of a 182.4-ton Top Ram Guide (TRG)– by means of an elevator system.

Due to head-turning scope and scale, the precision job left no room for error, comprising the transfer of the TRG from a storage position to a drilling tower on top of the Scarabeo 9 offshore ship – a last-generation, ultra-deepwater semisubmersible unit equipped with a dual RamRig and a Dynamic Positioning (DP3) system, and designed to operate in water up to 12,000 feet and drill up to 50,000 feet below the rotary table.

The main project procedures included Fagioli lifting the TRG by means of an elevator system onto Fagioli Storage Towers; skidding it onto the Fagioli Elevator System; transferring the load from hydraulic jacks to the skidding rollers; and jacking down the TRG with eight hydraulic jacks.

Such a job might seem impressive, but perhaps not mind-blowing, until one considers the TRG’s dimensions: 24 meters in length, 7 meters wide, 18 meters tall and again, over 182 tons.

Barnhart installed a silicon reactor for their client in late March of 2017 – a journey that took them through incredibly tight spaces and ultimately up a vertical shaft for securement on the second floor of a manufacturing facility. While installation options were limited, a Navisworks model was eventually provided to Barnhart with the reactor’s final location, which revealed that a path through the facility was possible – but just barely.

“The big question was, ‘what type of transport and rigging system could we use given the vertical and horizontal challenges everywhere?’” noted Brian Thomas, vice president, business development at Barnhart. Two key moves, in fact, involved righthand turns with as little as 1.8 inches of clearance. And once the reactor (46,000 pounds, 11 feet 5.5 inches in diameter and 18 feet 11 inches tall) snaked its way through the facility, it had to be tailed to vertical – with the model showing less than three inches of clearance. And the plant needed to stay in operation.

Other Rigging Job of the Year entries included:

ALE completed a lift and installation of FPSO modules using its giantAL.SK350 crane. ALE commenced the operations, performing the heavy lifting and installation of 31 modules onto the P-74 FPSO (floating production, storage and offloading) vessel in the south of Brazil.

OXBO Mega Transport Solutions engineered and executed a load-out plan for launching a 13,000-ton, 580-foot-long by 86-foot-wide by 96-foot tall vessel using 164 lines of electronic-steered Goldhofers along with a skid carrying 7,000 tons of load.

TNT Crane & Rigging completed the crude unit heater replacement project – delivered and installed in six sections – for a refinery in Ponca City, OK. TNT provided in-plant heavy haul and crane support, which required a site survey and multiple job walks, but in the end, over 18,000 incident-free hours were logged, and the job was completed on time.

Engineered Rigging replaced two high-pressure feedwater heaters in a plant without incident in 12 days, five days ahead of schedule. The challenges associated with removing the original equipment were identified in the planning phase and mitigated using metrology, 3-D modeling and 4-D animation.

Fagioli completed the erection of a 2,500-ton capacity Goliath crane in Romania using SPMTs, strand jacking and a tower lift system. The comprehensive project involved a plethora of up-to-date heavy transport and lifting equipment and deep engineering studies for disassembly and assembly operation of the different sections of the crane.

Diversified Industrial Rigging was asked to provide assistance with the removal and replacement of four induction draft fans at an energy facility in Belews Creek, NC. The basic scope required a fan – 30 feet long, 13 feet in diameter and 100,000 pounds – to be lifted approximately 2 feet, and moved horizontally 24 feet, all while dodging the structural steel supporting the duct system.

Tradelossa performed the lifting and skidding of two steam turbines, an outer casting of the turbine and a steam generator. The job entailed multiple challenges, as it was performed in a reduced space and at an altitude of 49 feet above ground in extreme climate conditions.

Emmert International was awarded a contract to install five compressor modules at a liquid natural gas facility located in Freeport, TX. Each of the compressor modules weighed 265,000 pounds, had a length of 44 feet, a width of 13 feet and stood 22 feet high.

HAULING JOB OF THE YEAR AWARDS

Four SC&RA members – all demonstrating exceptional organization, skill and commitment to safety – were recognized for meeting some of the industry’s most complicated challenges and responding with superior professionalism. 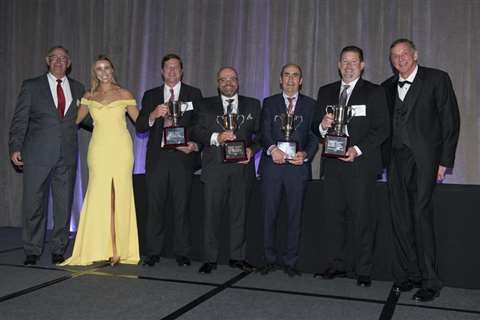 In November 2015, Precision Specialized Division received a peculiar question: What was the largest possible load they could transport by road from their plant in Ontario to Linden, NJ. In this case, 16 feet wide by 14 feet high was well beyond usual build size, and the end destination was of concern. 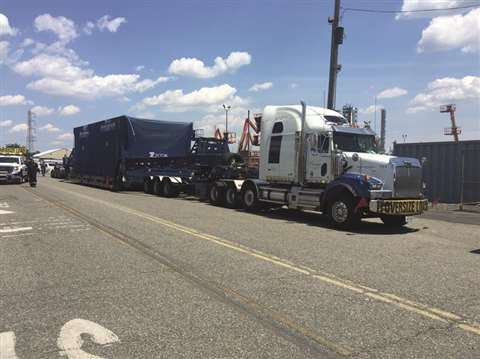 This job involved transporting expensive and fragile high-tech instruments, cased in thousands of pounds of steel, over a precarious route from North America’s busiest traffic corridor to one of its most populated – just 20 miles southwest of New York City. Precision’s team encountered many challenges: Weight-per-axle restrictions in Ontario, changing construction patterns in the U.S., complicated roadways and tight corners and an extremely difficult delivery site. The project comprised 16 modules ranging from 40 feet by 12 feet by 12 feet on the small end, to the largest at 40 feet by 16 feet by 14 feet. Precision utilized their Aspen 95-ton, 13-axle rear steer perimeter trailer, but also had to custom-make a 13-foot deck.

All 16 modules made the six-day difficult journey to Linden New Jersey. Each module required careful consideration, and thanks to precision planning and execution, the team was able to position the modules exactly where they were needed – successfully.

In May 2017, Edwards hauled three of the largest-ever fully assembled turbines from Schenectady, NY, to a new combined cycle power plant in the hills of Jessup, PA. From the moment Edwards was awarded the moves, the intricate pre-planning, problem solving and conceptualization of how to move cargo 375,000 pounds, 16.25 feet tall and 16.48 feet wide across a 260-mile route began. 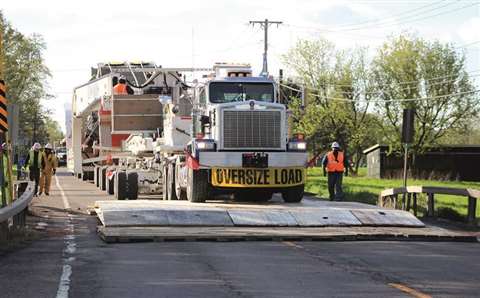 On May 2, 2017, the load began its 10-day trek – which would involve various structures, steep mountain grades and narrow winding roads. After 2,993-man hours, the turbine was finally on its last five-mile stretch of steep 8-11-percent graded route to the power plant – where it was positioned under the hook-on May 11, 2017. 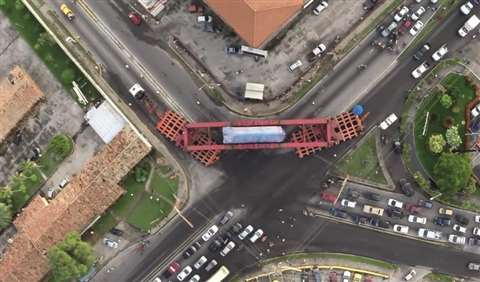 ALE’s team began the initial phase in December 2014, following the transatlantic navigation of the six engines from Italy and the trans-shipment to the barge, measuring up to 91 meters long, on the Orinoco River – which could change water levels by up to 40 feet. The second phase started in July 2015 and involved loading the engines at Cabruta quay on the Orinoco – utilizing 24 axle lines of SPMT to load the engines onto one 300-by-100-by-25-meter barge. Three pusher boats with low draft were deployed to help with barging 550 nautical miles along the Orinoco. One notable challenge included passing underneath the Maria Nieves drawbridge serving San Fernando de Apure – which had never been attempted before.

In August of 2017, OXBO Mega Transport Solutions performed an incredible scope of work that greatly expedited the building of Seattle’s Suquamish (a 144-car / 1,500-passenger vessel) ferry. The hull of the vessel, built in Seattle, measured 322 feet 6 inches long, 82 feet wide and weighed 4,235,000 pounds. The upper superstructure, measuring 280 feet long, 80-feet wide and weighing 3,150,000 pounds, was built 30 miles away in Tacoma, WA. OXBO’s job was to safely provide a crew and equipment to move the hull onto a floating dry dock in Seattle, while simultaneously providing a second crew and equipment to load the superstructure onto a barge in Tacoma.

Seven other Hauling Job of the Year entries included:

Emmert International transported a demethanizer column 800 miles from a fabrication facility in Northeast Texas to a refinery in Orla, TX. The column had a staggering overall length of 273 feet, a width of 18 feet, a height of 18 feet 3 inches and weighed in at 271,000 pounds net cargo weight.

OXBO Mega Transport Solutions responded to a tragic situation after a passenger train derailed near Dupont, WA. To assist in clearing the scene littered with several wrecked train cars, OXBO transported the 270,000-pound locomotive that jumped the tracks and landed on Interstate 5, closing all three southbound lanes of the freeway.

Barnhart hauled 80 pieces ranging, from 3 metric tons to 290 metric tons, from the Port of Long Beach to Weber Metals in Long Beach, CA, to assemble one of the world’s largest forging presses. The components were hauled on a 15-mile route using Barnhart’s GS-800 Carrying System.

Fagioli, in a confusing situation due to inadequate infrastructure and a lot of governmental red tape, executed a challenging heavy transport with loads exceeding 300 metric tons from the Turbigo to Cremona River Ports in Italy. The 140-kilometer haul was executed in eight nights (for each transport).

Emmert International moved a product purge bin and more than 8,000 freight tons of associated accessory cargos from Port of Point Comfort, TX, to a plastics plant five miles away. The vessel had a transport length of 149 feet, width of 31 feet 1 inch and a height of 35 feet 1 inch – and weighed 906,164 pounds.