With important global transportation issues, North American harmonization, safety and permitting topics on the agenda, the 2019 Specialized Transportation Symposium convened in Houston in February to a record attendance. Nearly 600 people attended the annual event that assembled a veritable Who’s Who of the specialized transportation industry, including business and governmental leaders, permitting officials and many others who work in the heavy haul services and support realm.

New this year was the opportunity to sign up for one-on-one meetings with state permit officials and concurrent conference tracks on safety and permits.

“This new format gave attendees the ability to follow different tracks that better suit their business interests,” said SC&RA Transportation Vice President Steven Todd. “This added a lot of value to the symposium, giving companies that sent two people or more the opportunity to leave with much more information and perspectives. The interactive format of each track encouraged best practices and practical application of tactics to everyday issues.”

A highlight of the symposium was a presentation by former Navy SEAL Kevin “Dauber” Lacz. A co-star of the movie American Sniper, Lacz wowed the audience with combat lessons that can be applied to the business world.

“Life begins at the edge of your comfort zone,” Lacz said. Receiving two standing ovations, the young combat veteran is the author of “The Last Punisher,” his true account of his 2006 deployment with SEAL Team Three’s Charlie Platoon with American Sniper Chris Kyle in Iraq.

For the first time, the American Association of State Highway and Transportation Officials (AASHTO) Freight Management Group conducted its annual meeting in conjunction with the SC&RA Specialized Transportation Symposium. This was hugely beneficial for STS attendees who could network with state and governmental officials from their respective regions.

AASHTO is a nonprofit, nonpartisan association representing highway and transportation departments in the 50 states, the District of Columbia and Puerto Rico. It represents all transportation modes and its primary goal is to foster the development, operation, and maintenance of an integrated national transportation system.

The 2020 Specialized Transportation Symposium will be held February 18-21, 2020 at the Sheraton Charlotte Hotel in Charlotte, NC.

Two heavy haul drivers were named SC&RA Drivers of the Year at the 2019 Specialized Transportation Symposium. Clay Bonnet of Berard Transportation and David Collins of Perkins STC accepted the award that is given for exemplary safety, integrity, talent and teamwork. 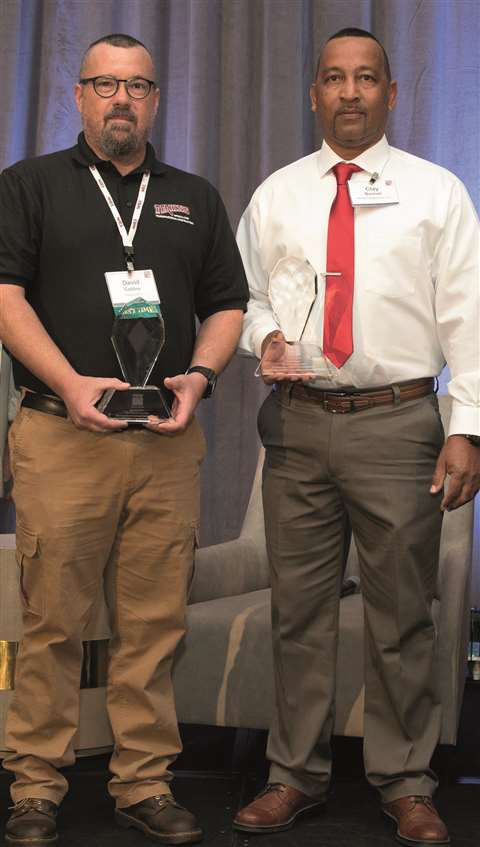 From left, David Collins of Perkins STC and Clay Bonnet of Berard Transportation were named SC&RA Drivers of the Year.

Clay Bonnet began his career with Berard in 1984 as a driver/rigger. Having never had a DOT recordable incident, Bonnet is a versatile driver. One of his greatest moves was a flawless trip in Texas last year hauling a 300,000-pound column that measured 16 feet high, 14 feet wide and 200 feet long. Bonnet serves as Berard’s mentor for all new hires, riding along with each of them to evaluate their driving habits. In addition, he leads all pre-trip/pre-job safety briefings with third parties.

David Collins has been driving professionally for more than 20 years. He too has never had a recordable DOT incident. He began his career as a heavy haul driver with Perkins in 2011. He has pulled a variety of equipment, carrying an assortment of cargo including industrial boilers, Class 7 hazardous material, tanks, generators and transformers. In 2018, Collins pulled several engines with a gross weight of over 1.3 million pounds on the Perkins 400-ton dual-lane suspension beam trailer through the upper peninsula of Michigan, a project that was a year in the making. He serves as subject matter expert on Perkins’ patented quantum trailer.