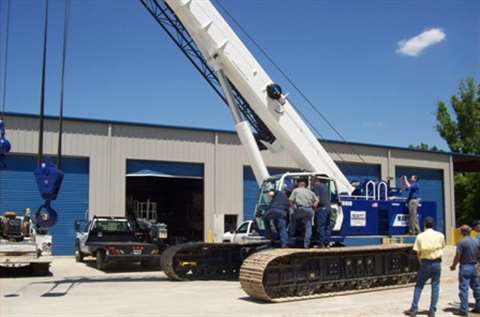 Scott Powerline's newest Tadano Mantis telescopic crawler has already been sent to work on a job in Florida.

Scott Powerline & Utility Equipment recently took delivery of the first Tadano Mantis 77-ton heavy-duty, telescopic crawler crane at its McDonough, GA facility. The crane has already been dispatched to a job in Florida.

Purpose-designed from the ground up as a tele-boom crawler crane, the Tadano Mantis 15010 is versatile and ideal for both pure lift applications as well as rugged duty-cycle work, the company said. The crane employs less counterweight than other varieties of cranes to avoid rearward stability problems on sloping ground. The crane's reduced counterweight, its 260 hp Cummins engine and high-pressure hydraulics allows the 15010 gradeability of up to 68 percent, the company said.

The new Tadano Mantis 15010 can pull through deep mud without bogging down and telescope or lift the boom with a full load on the hook, the company said. The 15010 also has a low clearance height, retract on-the-fly tracks, and its independent hydrostatic track drives allow pivot turns and counter rotation.