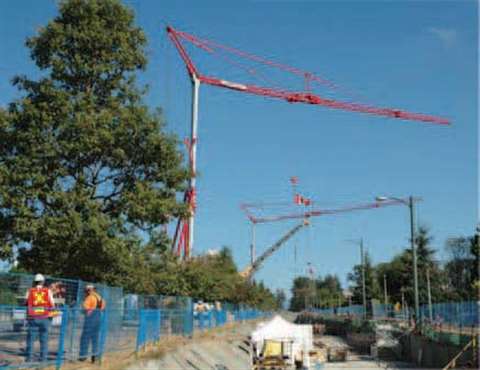 Five Potain self erecting tower cranes are working on a $1.7 billion rapid transit project in Vancouver, BC. Portions of the rail line will be underground. Rather than drill a tunnel, contractors chos

Getting the nod to host the 2010 Winter Olympics was a big deal for the city of Vancouver, British Columbia, and they are already preparing for the big event. First on the agenda in preparation for the occasion is the construction of a rapid transit line, an elevated and submerged rail system with a price tag of $1.7 billion.

With five, count them, five, self erecting tower cranes on the project, the job is an especially big deal for John Brons, manager of the Coast Crane Vancouver branch. “It is a great showpiece for us right now,” he says. “It is of interest to a lot of crane owners because it's a visible project and because it's a little bit away from the norm.”

Rather than drilling the tunnel for the underground portion of the rail line, contractors are performing a “cut and cover” process, which involves cutting a trench boulevard and then covering it over. After the trench has been dug the self erectors follow along and assist with the construction of the walls of the subway tunnel. The Potain models on the project include three Igo 50s, an HD 40 A and an MA 21, a mix of rental and purchased machines, Brons says.

This project is not only a showpiece for Coast Crane and the Manitowoc Potain brand, it is also a milestone for every self-erecting tower crane manufacturer trying to increase market share for this product in North America. The route to introduce these cranes to contractors and sell them on their benefits and capabilities has been a long, hard road.

When it comes to buying or renting construction equipment, contractors generally know what they need to complete the task at hand. Most often, they decide on a crane that they have experience with, a machine they consider tried and true. For this reason, selling a contractor on a self erecting tower crane is difficult, even though the machine has a list of attributes a mile long. Contractors aren't willing to “experiment” on a jobsite, and this mindset is why self erecting tower cranes have been slow to catch on in North America.

“We have been at it four years,” says Kevin O'Connell of Connecticut-based Shawmut Equipment, also a Potain dealer. “We had to spend a lot of time and commit resources to get the word out about these cranes.”

For more than two years, Gerry Wiebe has been working to establish distribution and a North American market for Koenig self erecting tower cranes. While he was sold on the design, engineering and capabilities of these machines, he too has faced the challenge of introducing the crane to customers who had never seen such a machine or had any idea what it could do. “There are two elements,” Wiebe says. “Educating the crane industry about ownership and demonstrating to them how to use the crane.”

In the case of a self erecting tower crane, a salesman can't just show the customer product literature or a video. For this machine in particular, the contractor must see the machine at work to visualize how he could use it on his jobsite. O'Connell says he has had to “get creative” to sell the market on self erectors, taking them on road trips, hauling them throughout the Northeast to jobsites and contractor headquarters, in a show and tell and sell effort. “It has been a pioneering effort, and in many ways it still is,” says O'Connell.

Brons says the self erector is a product that the user must see to understand how it works, which is why it requires so much demonstrating. “Coast Crane was among the first companies to bring this crane to the market,” says Brons. “We have done very well with this crane, as well as anyone in the market. I am not sure why the self erecting tower crane doesn't really take off. It may be a mixture of the sales people not giving it enough attention or the contractors being old fashioned and not wanting to try new things.”

Whatever it is, Brons, O'Connell and Wiebe concur that it's not about what the product cannot do. Once contractors can see the machine in action – its small footprint, ease of radio remote control operation, electrical power, quiet operation and ease of transportability and set-up, they are often amazed.

Ward Coffman who, with his wife Beth, owns and operates Boulder Valley Crane Service in Boulder, CO, is a new dealer for Koenig. He saw the Koenig product as an opportunity to expand his business by providing a good material handling solution for existing customers, specifically in relation to urban infill, urban redevelopment and mountain properties, which provide specific problems in regard to crane setup. “We saw this crane as a viable solution so we signed up and started buying a few and we've been really successful with them,” says Coffman.

O'Connell has also been successful renting and selling the machines to contractors working on mountainside projects. “We had luck early on in rural settings, mountain homes, lakeside homes, and ski resort condominium projects,” he says. “This gave us an opportunity to learn about the cranes ourselves.”

Shawmut is now introducing the cranes to urban contractors and is making inroads in more mainstream settings. Recently the company put a HDT 80 on a job at Harvard University. “It was a unique application,” he says. “There was very little room on the jobsite and Cambridge is very strict about allowing streets to be closed so the contractor couldn't have any equipment on the street.”

Using the space in a small courtyard, they were able to “sneak” the crane into a tight alleyway, setting it up and servicing the structure inside and behind the existing building with the ability to reach out over the street to unload trucks to keep city streets open, O'Connell says.

With 12 Koenig models and two more to be introduced in Germany in the spring at Bauma, Wiebe says that he is getting more and more inquiries about self erectors. In 2006 he has signed up Koenig dealers in Colorado, Ohio, Indiana, California and Washington and will announce others before year end. Koenig has developed an “American package” self erector that has brought many inquiries.

At long last, Wiebe said the market is “opening up” for the self erector product. Customers are realizing their benefits.

With 40 self erectors in its fleet in Abbotsford, British Columbia, Wiebe says Koenig North America has some 18 cranes on order and that it has sold 23 cranes in western Canada and the Western region of the US in the last couple of years.

O'Connell explains, “Contractors are now seeing them as an option,” he says. “We definitely have more and more contractors coming to us, rather than us going to them.”

And not only are informed contractors starting to inquire about renting or purchasing these machines, they are also looking at the range of brands available, which is also a good sign. “We certainly find that other brands are coming up in our discussion with customers,” says O'Connell.

Coast Crane has sold between 40 and 50 self erectors since it started marketing them a few years back and it has close to 114 self erecting tower cranes in its fleet. Brons too has run into the competition, especially now that Koenig, Liebherr, Piener and Comedil are offering self erecting lines in North America. “The rental market for these cranes continues to grow,” he says. “We are now running into competition for rentals.”

Competition is a good thing, mainly because it proves market awareness. Wiebe has done an inordinate amount of research about the market for self erecting tower cranes in North America, working to determine market potential and to target the projects and the customers for this product line. He believes the potential for self erectors is huge, mainly because they are applicable to so many jobsites, because they are so reasonably priced as compared to a mobile crane, and because of their ease of operation and use.