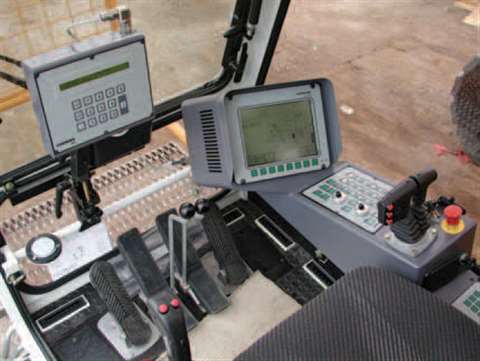 Long-time crane operators probably thought they would never see the day when they would be “booting up” a crane every morning, much less have the ability to program swing and radius limits or even download load charts via a cell phone. However, that day has come, with little if any resistance, according to Scott Moreland, vice president of sales at Liehberr Cranes.

“These systems are not too complicated for operators at all,” says Moreland. “We just delivered a new LR 1100 and heard from the customer that there was an argument among operators in determining who would get to run the crane and try out the new system.”

Liebherr is among the manufacturers that design and produce their own electronic control systems while others purchase systems from specialty manufacturers who tailor them to the crane maker's specifications. Either way, today's cranes have devices designed to give the operator as much information as possible to get the job done, get it done right, and get it done safely.

“Ours is basically a fly by wire electronic system over hydraulic, an electronic interface between the operator and the crane's hydraulics,” Moreland explains.“Operating the crane is very easy with our touch screen. In a normal operation there are only five screens the operator will work with. The start-up screen begins with the configuration of the boom, how many parts of line and boom length, and then when all that is checked it goes on to the operations screen.”

There is no question that these systems help the operators do the job, giving them information they need to make a lift or perform duty cycle applications. In addition, these systems offer information that can keep the crane in optimal running order. Liebherr's Litronic system can monitor fluid levels, engine temperatures and the like.

“All of this information can be valuable in operating the crane,” Moreland says. “If there's a problem, the system will beep, and if an anti-two block sensor is hit, it will beep and there will be a blinking light, and by touching a picture of the lift on the screen, the operator can get the information about the fault.”

Newer model Liebherr cranes are able to store each crane's “fault history,” Moreland says. Also, newer systems have the option of a cell phone modem that allow for remote diagnostics.

However, Liebherr views these systems as aids to the operator, even though there are safety elements built in, such as the load moment limiting system that can warn the operator when limits have been surpassed and safe operation may be compromised.

While Liebherr touts the systems as easy to use, it still recommends training for every operator who runs cranes with these systems.

Ben Graham, crane division manager at Kirby-Smith Machinery in Oklahoma City, OK, says that operational aids are more sophisticated, and they are more operator friendly than they were 10 years ago, especially the OEM products. “The industry acceptance for these systems is much greater than it was 10 years ago,” he says. “They are the norm now. In our own rental fleet that is the case.”

With a large rental fleet of cranes, Kirby-Smith has retrofitted all its older cranes with new LMI systems, often buying a range of devices made by different manufacturers, based on the use of the crane. “A lot of our customers have discovered that their clients required that older cranes be upgraded with these systems,”he says. “We believe that by updating our older units with these systems, we have also cut back on overload and crane accidents. It was an investment we saw as worthwhile.”

In terms of purchasing new cranes, Graham says his company goes with whatever the manufacturer has chosen to install, rather than specify something different.

Early systems required more training than newer systems, however, all operators should be trained on the system in which he will be operating, he says.

“With every rental, we go out and train the operator on the machine,” he says.“It's just a part of our customer service.”

For the last few years, there has been a rush to replace older LMI systems, which has obviously stimulated the retrofit market for these devices. And while they are not necessarily designed, sold or marketed as a safety device, Graham says they definitely make for a safer jobsite and safer operators. “But, in some cases, they can get you in trouble,” he says. “If you don't program them correctly, there can be issues.”

Active in the retrofit after-market and the OEM market, Hirschmann Automation and Control says it distinguishes itself by staying close to the market to assess the direction its products should take. One of the early players in this technology, Hirschmann has found a niche in updating its own older systems.

“We're finding a strong market in both areas,” says John Rudy, product manager. “Our products are being used across the board, on lattice and hydraulic boom cranes and boom trucks. Some of our competitors design their products for one or the other.”

Rudy says Hirschmann has keyed on extending its product line to include systems that allow for modernizing older systems installed on boom trucks or hydraulic cranes. The Hirschmann Maestro LMI upgrade has proven to be a cost-effective modernization.

“The retrofit is pretty simple,” Rudy says.“The central unit is replaced with a more compact unit designed for easy installation in the operator cab. The original data and load chart information is loaded into the central unit and after a brief sensor alignment through the console, the crane can be ready for operation in just half a day, without needing to be re-calibrated. It's quick and cost effective.”

Some crane owners are concerned about maintenance and durability. “Ease of use and service back up and support is vital to our customers,” says Mark Van Dyke, sales manager at Southern California-based Greer Company, which sells to US crane manufacturers. Link-Belt, Terex and Broderson install Greer's MicroGuard RCI systems on several models of their US built telescopic cranes. In these cases, the manufacturers work with the company to devise a system tailored to the product. “There are many differences with our products from our competitors, mainly they are known for being quick calibrating and durable,” says Van Dyke. Greer's RCI 510 and RCI 586 are mainstays in the industry with many long-time crane operators having some experience with these systems, Van Dyke says.

Greer has found a niche selling its systems as retrofits on cranes owned by the US Marines. The MicroGuard 587 and MicroGuard 510 retrofit rated capacity indicators are designed for all mobile hydraulic crane applications.

Without doubt, Van Dyke views these systems as safety devices. “They can save lives and property, and they can help lower insurance rates,” he says. “With so many jobs now, you can't operate a crane in some refineries and on some government jobs unless you have these systems. They are no longer optional.”

With sales growing at a rate close to 30% a year, Load Systems International serves a range of markets with its products that key on durability. They have a waterproof stainless steel sensor housing and use wireless technology, for example, Palm Pilots to upgrade and update the systems. The LSI product line includes rated capacity indicators, load indicators, boom angle indicators, anti-two-block indicators and wind speed monitoring systems.

“We are heavy in the rental market and also heavy in the marine and offshore market as well as the dock container crane markets,” says Dave Smith, president. “Generally we replace existing hardwire systems with our wireless systems. Right now, about 65% of our market is for after-market replacement systems.”

Smith says LSI systems are designed to dovetail into a crane's factory computer system, replacing hardwired systems. LSI is working to introduce a new product that Smith says will be the most advanced wireless system on the market, with two-way communications and a half-mile range.

While the market for these systems is competitive, Smith says it is healthy competition. “We are all bringing different technologies to our customers,” he says. “I wouldn't say there are not too many companies in the market. There's a nice range of selection for the customer.”

With 25,000 of its LMI, load monitor and anti-two-block systems installed on cranes around the world, Cranesmart Systems is also competitive in the retrofit market. Cranesmart products allow the owner to make choices in the systems he needs, according to Jamie Dalton, marketing coordinator.

Rayco-Wiley has been working in the radio products area for the last three years, but plans to evolve into spread spectrum technology for its wireless systems. Beardsley says that spread spectrum technology will allow for better and more reliable two-way communication for its operator aid systems. “This new system we are working on will be easy to install and will have less jobsite interference,” he says.

About 70% of Rayco Wylie's business is in the retrofit market, although the company does some OEM business.

“Our units are well accepted as replacement or upgrade systems,” Beardsley says. “The i3000 has been very successful and is a new approach to crane safety instrumentation. At a glance, the operator can find graphically all the parameters of a machine connected to the system. It's very flexible and can be customized to meet each customer's requirements.