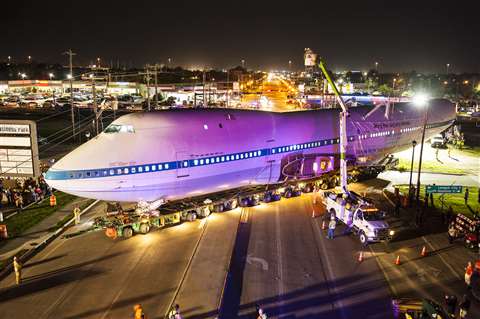 Moving the historic Boeing 747 aircraft was a major production, requiring the removal or lifting of power lines, traffic lights and making some really tight turns.

It was a spectacular image, whether you saw it in a newspaper, on the television news or with your own eyes in the skies overhead. Hundreds of times during the 31-year Space Shuttle program a modified Boeing 747 jet would give the spacecraft a piggy back ride from the West Coast to the Kennedy Space Center in Florida.

Seeing the Space Shuttle lashed to the top of the Shuttle Carrier Aircraft (SCA) and giving it a ride back to the launch pad in Florida was memorable for those who saw it take off, in flight or landing. Every journey was newsworthy because it was such a marvelous juxtaposition – a huge passenger jet hauling an elite spacecraft.

In one of the first issues of American Cranes & Transport, (September 2005), I wrote an article about the customized gantry system, known as the Mate/Demate Device, (MDD), used to hoist the shuttle on top of the SCA. While NASA preferred to land the shuttle where it was launched, in the early years it was necessary to ferry the shuttle across the country many times.

A few times, the Space Shuttle landed in New Mexico. In this case the same lifting beam and sling used in the MDD would be rigged to two cranes, which would then lift the shuttle on top of the Boeing 747.

When the Space Shuttle program came to an end a few years back, the SCA was called back into service to give the remaining shuttle fleet a final ride to the cities where they would become museum exhibits.

Houston, home to NASA’s Mission Control Center for the Space Shuttle program, wasn’t chosen as one of the places for a Space Shuttle exhibit. After a lot of wrangling by Houston officials, it was decided Houston would get a Shuttle replica that had been displayed at Kennedy Space Center in Florida. To make the display more compelling, curators at Space Center Houston asked to get one of the SCAs. They wanted to mount the shuttle replica atop the SCA in the ferry flight configuration.

“When finished, this exhibit will allow visitors and students to be able to go inside both the Boeing SCA and also the orbiter replica for an unprecedented experience like no other in the world,” said Space Center Houston Operations Manager Anson Brantley, in a press release. “Project completion is approximately 1.5 years and will involve many partners, including Boeing and Jacobs Engineering. We are also excited about many partners who are expressing interest in helping support this world-class educational project.”

Last fall, Palletized Trucking got the call about hauling the SCA from Ellington Field Airport to Space Center Houston.

“Boeing called us about six months prior to when they would need the plane moved from Ellington Field,” said Joey Westbrook, super heavy haul manager. “They pretty much had some ideas of how to move it, but when it came down to it they left it up to us to figure out what equipment needed to be used and we helped out with the route.”

The plane was flown into Ellington Field by a Boeing pilot.

“It was a fully functioning plane before it was dismantled and it will look like a fully functional plane once it’s put back together at Space Center Houston,” said Westbrook. “They brought in a special team to drain all the jet fuel, hydraulic fuel and any oils and liquids.”

The plane was then set on jacks for further dismantling, including removal of the wings and the tail.

Prior to the plane landing, Palletized Trucking crews considered route options. Turning radii would be a challenge, and there were power lines and traffic lights to lift or take down. In some cases, width clearances were very tight.

“There could have been some choices in the route,” said Westbrook. “We studied the route options and drove those that we thought were the best. Between us, Space Center Houston and Boeing, we agreed on the 8-mile route used. Again the biggest issue was maneuvering the fuselage around tight turns.”

The fuselage section, with the wings, tail and all the fuels removed, weighed about 135,000 pounds. It measured 29 feet wide, 34 feet tall and 189 feet long.

Palletized Trucking used its Goldhofer SPMT to move the fuselage.

“We rigged it with 22 axles and a bunch of spacers,” said Westbrook. “Boeing came up with their own rigging spots on the plane, and we told them where we would rig it and lash it to the Goldhofer using one-half inch chain and ratchet binders to secure it at the rigging points.”

The Goldhofer PST powered the traveling for the fuselage. It was slow going, with the crew walking alongside the plane.

“The first night we started about 9 p.m. when the curfew was lifted and after our safety meeting. We shut down about 6 a.m. the next morning,” said Vince Calloway, project sales representative for Palletized Trucking. “They clocked us at about 2.3 miles per hour, with the crew walking backwards most of the trip.”

Walking backwards was necessary in order to keep an eye on the fuselage to make sure it cleared the narrow roadways and the tight turns. There were 16 members of the Palletized Trucking team working each night.

“Everyone had a key role,” said Westbrook. “We travelled about six miles by the first night, and the remaining two miles the next night.”

At dawn the transporter carrying the fuselage was moved to a pre-designated off-the-road site until the next evening when the roads would be closed and the final leg of the trip would start.

“On the second night we had our safety meeting and then we started rolling about 9:30 p.m.,” said Ron Moon, vice president, heavy haul operations, Palletized Trucking. “We pulled into the Space Center about 2:30 a.m.”

Kenco Bucket Trucks handled all the utility line and traffic light lifting. “Kenco coordinated all the aerial lines and anything that had to be moved or raised,” said Westbrook.

Two days later crews from Palletized Trucking loaded up the remaining pieces of the airplane using conventional tractors and trailers. The two wings were transported on Scheuerle trailers, and pieces of the Forward 48 fuselage were hauled on a step-deck trailer. One of the main tail fins was put into a jig and was hauled upright on a Goldhofer lowboy. The vertical fin was also put into a jig and hauled on a step-deck trailer.

Once the plane was reassembled crews from Palletized Trucking were set to go back out to load the plane on its Goldhofer PST to move it to where it will be exhibited. Once it’s secured in that location, a crane will be brought in to place the shuttle replica on top of the plane in the ferry configuration.

Calloway said moving the plane was a memorable experience. He learned that this SCA was built in 1969 and spent few years as a passenger jet for United. It made 222 ferry flights, and decals of each are displayed