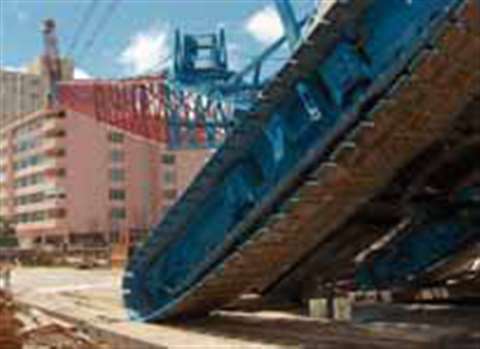 XYZ Crane is set up on platform boards. The water has seeped out through the pavement after a water main broke, causing instability in the ground, which resulted in the crane overturn

On a construction project, site conditions change every hour, if not by the minute. There are multiple parties doing multiple jobs, leaving plywood here, moving trusses there, setting ladders on the ground, etc., which begs the question, “Who is responsible for the overall conditions of the jobsite?”

If you are not careful, the answer could be you. Long gone are the days where work could be done with a handshake. Subcontractors, general contractors and owners have become increasingly aware of the direct correlation between their loss history and the cost of insurance, as well as the need for a good loss history to secure a reputation for safety to allow expansion.

Incorporation in terms of a subcontract agreement means to make other documents part of the contract, which can include both the prime contract and governmental regulations. For proper incorporation, the subcontractor agreement needs to incorporate these documents by reference. This creates multiple problems for XYZ Crane, which is bound by the additional obligations of the prime contract and governmental regulations that may include responsibility for site conditions.

To make matters even worse for XYZ Crane, often the contractors to whom they are renting a crane or hoist will not make available to them the prime contract for viewing to determine what these additional obligations are. Courts have taken various views on this and while a contractor may be able to use a conscionability defense (i.e. a defense available to small-time subcontractors as a result of unfair bargaining power in relation to a general contractor), other courts have taken the view that when the subcontractor agreement incorporates these documents properly, it is the responsibility of XYZ Crane to understand these obligations and not contract blindly. It is highly advisable, therefore, for XYZ Crane to make sure it gets access to the prime contract so that it is advised of these additional obligations and responsibilities.

Another way XYZ Crane can become responsible for overall site conditions is through a subcontract agreement. This can be disguised as a safety provision that states something along the lines of “subcontractor shall conduct inspections to determine that safe working conditions and equipment exist and accepts full responsibility for providing a safe place to work.” First of all, if conditions change by the minute, it is difficult to inspect them often, especially when XYZ's operator is doing the job he is hired to do, which is operating the crane. Further, what about other subcontractors who are on the jobsite and making it unsafe, and it is XYZ Crane's obligation to clean up their messes?

Site conditions not only include visible materials, structures or debris, but also include ground conditions and subsurface voids that may affect the performance of your work and ultimately may cause damage to your equipment. Above we examine how site condition responsibility is flown down through contract provisions; however, ground conditions can be flown up, such that you make it the responsibility of the general (or whomever you are hired by) by contract to make sure the ground on which XYZ Crane works is stable. This is important because the nature of crane work is to arrive on the jobsite and set up where the lessee of the crane tells you to do so. If the lessee is the general contractor, they have been working the job longer and are presumably familiar with subsurface voids and ground conditions from both the project specifications and from onsite observation. A ground condition provision such as that described below can protect you against this type of exposure, and may assist you in subrogating damage to your crane in the event your crane overturns from ground instability:

Such a provision was used in a daily work ticket when a loss occurred to XYZ Crane, claim number SRSA-1234. XYZ Crane was hired to work on a condominium project by ABC Construction. The day prior to XYZ's work, a water main had broken and ABC (as well as the city) had knowledge of this. The next day, XYZ Crane set up their crane on matting (plywood boards) over the ground, unbeknown to them that a water main had broken. After set up and upon the beginning of operation, the crane slowly tipped forward as the ground gave way, causing damage to the crane as well as an adjacent condominium building.

A geotechnical engineer and attorney were hired immediately to go to the scene, and it was determined by the geotechnical engineer that the cause of the loss was directly a result of the ground failure and the water main break, which had caused a lack of buoyancy in the ground. The loss has been tendered to ABC Construction, based on the provision in the daily work ticket.

Not only does the above loss indicate the importance of prompt notification, it illustrates the importance of a ground conditions provision. The amount of the crane damage was in excess of $200,000 and the amount of the liability damage was in excess of $50,000. These were able to be deflected by XYZ Crane. In conjunction with review of a subcontractor agreement you are made to sign to identify what site conditions the general is attempting to make you responsible for, a ground conditions provision in your daily work ticket can help you avoid the risk of loss.           act