Since 1982, Intrepid has been part of the Intrepid Sea-Air-Space Museum in New York City. The ship recently underwent an $8 million dollar interior renovation, which is when R. Baker & Son became

The USS Intrepid was one of the most successful ships in United States maritime history and is now a national historic landmark.

Intrepid participated in the Pacific Theater of Operations of World War II, most notably the Battle of Leyte Gulf. Intrepid launched the propeller-driven planes which helped defeat Japan.

Later, she launched the helicopters that recovered spacecraft from the Mercury and Gemini Programs. She also launched the jets which supported US ground forces in the Vietnam War.

Because of her prominent role in battle, she was nicknamed "The Fighting I," while her often ill luck earned her the nickname "The Evil I." Since 1982, Intrepid has been part of the Intrepid Sea-Air-Space Museum in New York City. The ship recently underwent an $8 million dollar interior renovation, which is when R. Baker & Son became involved in the project.

R. Baker & Son was contracted to first perform the rigging and relocation of several aircraft which were slated for restoration. Careful planning -- including critical lift plans for each pick -- and coordination was necessary to make sure that each pick was done safely and without damage to the priceless items. Aircraft that were rigged down from the Intrepid's flight deck included a F11 Phantom EX Navy Blue Angel Jet #5, an A4F Sky Hawk Simulator, a Panther jet engine, and a C2 cargo plane.

These items were rigged down using a 1982 Krupp 100 GMT, 120 ton hydraulic truck crane rigged with a spreader bar, associated rigging gear and a four- to five-man rigging crew. These military objects were then rigged onto flatbeds or onto barges.

Following removal of the aircraft, R. Baker & Son was tasked with the rigging of a 24,000 pound brass propeller from the flight deck to the ship's hangar for storage and refurbishment. To accomplish this feat, a trailer was rigged onto the flight deck. The propeller was rigged onto the trailer using a gantry crane system and chain blocks. The trailer with the propeller secured to it was then moved down to the hangar deck using one of the Intrepid's elevators.

The last task was to rig the Rolls Royce/Snecma engine that was part of the Concord from the hangar deck to the flight deck. The Rolls-Royce/Snecma Olympus 593 engine specifications are: Thrust: 32,000 lbf (142 kN) dry/38,050 lbf (169 kN). The engine was moved from the hangar deck to the flight deck using rigging skates and a 5,000 pound forklift. The engine was rigged down to ground level and placed on a flatbed. R. Baker & Son provided transportation of the engine from New York City to the British Airways hangars at JFK Airport.

Handling the lifting, rigging and transport for the Intrepid project was a heartfelt project for R. Baker & Son for many reasons. R. Baker & Son is a veteran-owned business and Project Manager Ken Paszkewicz is a Vietnam War veteran (two tours of duty, from 1969 to 1971 on the aircraft carrier USS Hancock CVA19). At times during the project, the original pilots and aircraft crews were on hand to witness the rigging and relocation of the aircraft and other military objects.

The project was extremely successful with no injuries and no damage to any of the military aircraft or pieces, according to Paszkewicz.

R. Baker & Son All Industrial Services is a premier specialized contractor for dismantlement, decommissioning, plant relocations and demolition in the US, Canada and Puerto Rico. Established in 1935, the company has more than 100 employees and has earned an exemplary safety record (four VPP OSHA safety awards). Capabilities include total plant and facility dismantlement, decommissioning and demolition as well as entire plant relocations and re-installation, heavy equipment rigging, machinery moving and millwright services and onsite concrete crushing. 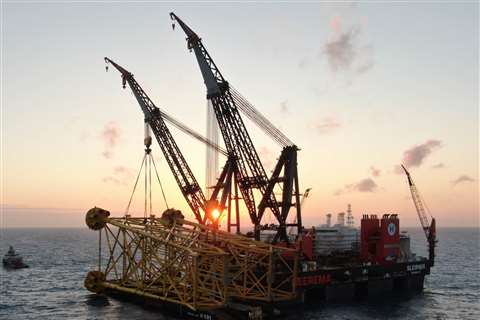