Based in New York City, Brad Kelechava is a marketing product specialist for the American National Standards Institute (ANSI). ACT obtained permission from ANSI to print this article, that was originally published as a blog post on June 18, 2018 on the ANSI blog at https://blog.ansi.org/2018/06/asme-b30-9-2018-slings/.

The sling, like many other technologies, has roots in warfare. Constructed in various forms since the dawn of civilization, slings were archaic missile launchers, firing projectiles with the energy that one could generate by swinging a rope. 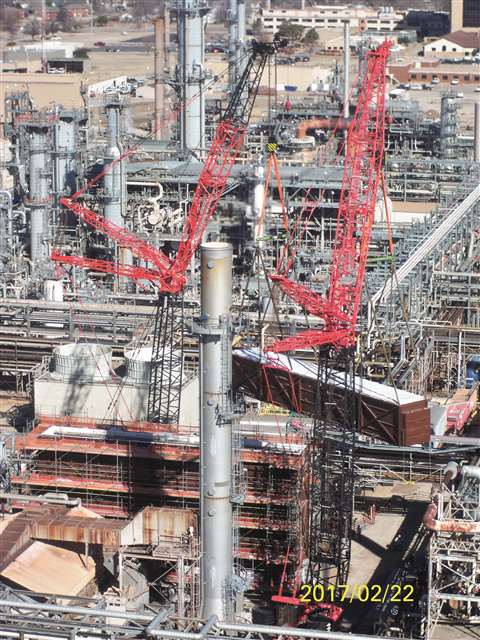 TNT Crane & Rigging rigged its two Liebherr LR 1350 crawlers with a complicated system of spreader bars, chain falls and slings to lift a 425,000-pound convection section of a crude heater at a refinery in Ponca City, OK.

In the Modern Age, however, the quick and easy conversion of potential energy to kinetic energy by slings has increased the efficiency of numerous industrial practices needing to handle and transport heavy loads. However, if slings are faulty, injuries and even fatalities can result. Therefore, inspection and proper use of slings while considering their environmental conditions remain crucial.

Since 1971, slings have been specified in ASME B30.9. This is actually a “chapter” or “volume” of the overarching ASME B30 standard. Developed by the ASME B30 Standards Committee, this “Safety Standard for Cableways, Cranes, Derricks, Hoists, Hooks, Jacks, and Slings” contains a range of provisions for the construction, installation, operation, inspection, testing, maintenance, and use of cranes and other lifting and material-movement-related equipment.

ASME B30.9-2018: Slings, an American National Standard (ANS), is the latest edition of this volume of the industrial safety standard. Its provisions apply to the fabrication, attachment, use, inspection, testing and maintenance of slings used for load-handling purposes. For the most part, these slings are used in conjunction with equipment described in other volumes of ASME B30. Specifically, ASME B30.9-2018: Slings addresses slings fabricated from alloy steel chain, wire rope, metal mesh, synthetic fiber rope, synthetic webbing, and polyester and high-performance fiber yearns in a cover (or covers).

ASME B30.9-2018: Slings revises and supersedes the 2014 edition of the same standard. This update contains the following changes

“ASME B30.9-2018: Slings” is available on the ANSI webstore at https://webstore.ansi.org/RecordDetail.aspx?sku=ASME%20B30.9-2018&source=blog. It also can be acquired as part of these Standards Packages: