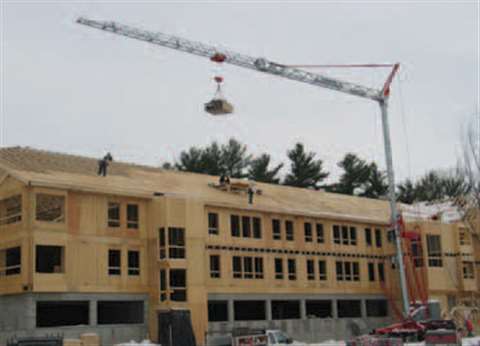 Vermont-based Shawmut Equipment * recently rented an Igo MA21 self erecting tower crane to work on a multi-unit retirement community in Middlebury, VT. Once the main contractor finished using the cran

For almost four years, Shawmut Equipment's Kevin O'Connell has been traveling around the Northeast discussing with local contractors the attributes of self-erecting tower cranes.

“The more people see these cranes and the work they can do and the benefits they can offer, the more opportunities we have had to put them to work,” says O'Connell. “It's an exciting product because not that many people know about it. What is great is when people see them actually operate and see the benefits such as the small foot printing, the ability to reach up and over a building, and the radio remote control features. When you demonstrate this crane, you get a lot of strong feedback.”

Shawmut has been among the most aggressive dealers of the Potain self-erecting crane line in the US, O'Connell says. “We are pioneers in this market for this product,” he says. “We are definitely one of the first companies to bring self erectors to the Northeast and invest the time and effort to build a customer base and the product support capability.”

The first market to show interest in the Potain Igo line was contractors who used them for setting panelized wood structures, including wall panels, floor joists and roof trusses, O'Connell says.

Such was the case for Brandon, VT-based Naylor and Breen Builders, which rented a Potain Igo MA21 to work on a multi-unit retirement community in Middlebury, VT. “Initially they rented the crane to set roof trusses,” says O'Connell. “But as it was working, the other subcontractors on the job saw the crane and what it could do. They had other uses for it so it stayed on the job.” The roofing contractors used the crane to lift and set roofing materials and remove debris.

“What they liked was the radio remote control feature where they could be on the roof with the load and control the load and place the bundles of materials precisely,” says O'Connell. “So the crane has served many purposes on that job beyond wood framing.”

Kerry Wetmore, jobsite superintendent for Naylor and Breen, says his company was pleased with the MA21's performance, ease of operation and quick set up. Fast erection and dismantling is via handheld radio remote control, maximum capacity is 2 tons, maximum radius is 85 feet and hook height is up to 63 feet. The crane runs on either 480V three-phase or 220V single-phase AC.

O'Connell contends that the rental and sales market for self erecting tower cranes will continue to grow. “We have retailed three HDT 80s and we're quoting an Igo MA21,” he says. “I think there is a market for selling these cranes as well as renting them. It will just take time.”