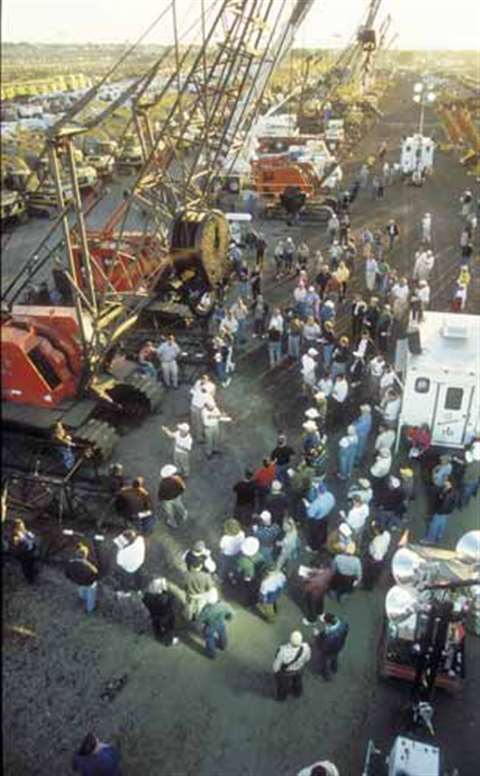 Ritchie Brothers is the world's largest equipment auction company, holding auctions around the world. This one in Orlando set a record for sales in 2005

For several months last year a 1997 Grove GMK150 truck crane was advertised for sale for $500,000. Located at a crane yard in North Carolina, the crane was in excellent condition, ready to work. Prospective buyers from all over inquired about the machine, but for one reason or another decided it just wasn't right for purchase at that time.

But just last month that same crane sold for $525,000 in a matter of minutes at a liquidation auction in North Carolina. Soon after the end of auction, the crane's new owner hauled it to Texas where it is now at work on a large-scale job in Houston.

“Auctions are the yard stick for establishing equipment values,” says Myron Bowling of Myron Bowling Auctioneers, based in Hamilton, OH. “They are the arms length transaction. Auctions are a very accepted retail marketplace [for cranes and other types of construction and industrial equipment.]”

Bowling says that the buyer of the Grove crane was pleased with the purchase and the price because he had a well-paying job for which he needed the crane. “For one guy, that might be too much to pay, but if you need the crane, you buy it,” he says. “The time lag between when you need a crane and the delay if you have to order a new one can be up to a year.”

Bowling specializes in one-owner sales, mostly auctioning off equipment at plants, crane rental yards or other operations that are closing or liquidating. In January, Bowling auctioned off the assets of Inco Inc., based in Rocky Mount, NC, which included the sale of more than 15 cranes. Sellers are attracted to this sort of auction because they don't have to invest in the cost of moving equipment to an auction event, he says. As well, equipment is sold as it is, rather than painted, Bowling says.

In today's market, all equipment auctioneers are thriving. Ritchie Bros., the largest equipment auctioneer in the world, sells a broad range of used and unused industrial equipment including equipment utilized in the construction, transportation, material handling, mining, forestry, petroleum, marine, real estate, and agricultural industries. The company conducts some 150 unreserved public industrial auctions every year, and has 110 offices in 25 countries, including 31 auction sites worldwide.

“For Ritchie Brothers the auction sales business is very good,” says Denis Prevost, vice president of national accounts. “Our system of sale is definitely gaining more and more acceptance with local and international crane and heavy haul buyers and sellers.”

The market for new and used cranes and construction equipment is very strong and buyers appreciate the ability to have transparency in their transactions and the unreserved auction method supports this ability, Prevost says. The company's biggest auction to date was held in Orlando, FL in February 2005. The four-day unreserved auction drew more than 4,600 registered bidders from 62 countries, and generated more than $79 million in gross auction sales.

Large scale auctioneers like Ritchie Bros., and smaller scale companies like Brooklyn, MS-based Durham Auctions are all experiencing heightened interest in their auctions, heightened sales and higher prices. Auction sales are being stimulated by the Internet.

“We have tens of thousands of equipment searches on the Internet, and we have inventory all over the world, and our internet website allows potential buyers to see the type of equipment that is available for sale,”says Prevost. “Sometimes [buyers] travel to the auction, however they can still bid over the internet with our live, real-time bidding process.”

Some 10 percent of the equipment sold by Ritchie is done by Internet transaction, Prevost says. Ron Robertson of Durham Auctions says his company is capitalizing on the Internet as well.

“We also offer live real-time audio/video auctions online,” he says. “Our last equipment auction had 1,640 registered buyers from 29 states and three foreign countries. Our clients can sit at the computer in California and see on screen the equipment for sale and the auctioneer. They can bid live against the house as if they were here.”

Durham Auctions is likely more advanced than some of its like-sized competitors, getting as many as 7,000 hits per day on its website from those looking for equipment and vehicles. Who would have ever thought that equipment buyers would resort to such high tech tactics?

“It's worldwide,” says Robertson, whose company hosted 52 auctions last year. “I'm sure everyone is upgrading and getting into the 21st century as far as auctions and online bidding.” Some auctioneers are solely Internet based and don't offer live sales. Robertson says most of his customers still prefer live sales. They like to touch the equipment, see it, put their hands on it.

In terms of cranes, Robertson says his company sells as many as they can get their hands on, drawing used equipment consignors from municipalities, dealerships, rental companies and contractors who want to update their old fleets but first need to sell their older units. “We recently bought a large package of cranes, 15 to 20 ton range - cherry pickers, truck cranes and crawlers,” he says.

But with cranes, Robertson says that they are “a different kettle of fish.” He says if he has a Mack or Peterbilt truck in a sale, a prospective buyer will come out and spend 15 or 20 minutes looking at the truck, raise the hood, look at the engine, start it up, check the oil, kick the tires and the like.

“But an educated crane buyer will spend three days looking at a crane,” he says. “It's a whole different area. You can't lump cranes in with trucks or even excavators or dozers. Crane buyers spend much more time assessing the machine. They know exactly what they want. You may have two cranes side by side, and they may look identical, but they may have absolutely nothing in common to a crane buyer.”

An auction and evaluation company, Dovebid Auctions sells a lot of equipment over the Internet. Most of its buyers send out inspectors or agents to preview the equipment ahead of the actual internet auction.

“We focus basically on surplus asset disposition,” explains Dovebid's Romie Castelli, whose company works for a number of Fortune 1,000 companies, liquidating and disposing assets. They sell equipment through live auctions and web cast auctions. Every 60 to 90 days they host what Castelli termed “corporate swap meets,” or “corporate garage sales,” where they run an E-bay style auction.

“The business is definitely growing,” he says.“As we build a bigger marketplace, we are attracting buyers. Right now there is a huge demand, and as we aggregate it into one place we make it easier for the buyer to find us, which makes for a more vibrant market, which leads to higher prices.”

Peter Clark, president of Yoder & Frey Auctioneers, operates one of the most well known auction companies in the US, serving the needs of heavy construction equipment buyers and sellers since 1964. Clark says the auction market is favorable for a number of reasons. “Interest rates are down and equipment is hard to get,” he says, “so the numbers come out to be pretty favorable.”

Yoder & Frey hosts the “grand daddy” of all equipment auctions, held each year for the past 30 years in Kissimmee, FL. In 2005, Yoder & Frey sold more than $67 million worth of equipment at the Kissimmee event, with 20 percent of the sales coming from non US buyers. More than 10,000 pieces of new and used heavy and construction equipment, trucks and trailers are sold at the eight-day event, making it the world's largest annual heavy equipment auction.

Most of the equipment at Yoder & Frey auctions is consigned equipment. In 2005, prospective buyers from all 50 states and 40 countries attended the Yoder & Frey Kissimmee auction.

Clark says the only time he can remember a better market was back in the early to mid 1970s. Backlogs by manufacturers are also stimulating auction sales worldwide.

Last year's hurricanes in the Gulf Coast also impacted demand. “In certain types of equipment, the hurricane has taken a big amount of that equipment out of circulation,”says Clark. “Dump trucks, loaders, back hoes, skid steers and cranes. Anything needed to help clean up and reconstruction is in demand, especially boom trucks and bucket trucks.”

Robertson with Durham Auctions knows firsthand about the impact of Hurricane Katrina. The eye of the storm blew right through the small town in which his company is located, although fortunately, Durham's facility was spared major damage.

“The demand is probably a little more dramatic in this area, due to the hurricane,”he says. “A tremendous amount of equipment was lost in the storm. We are still in the clean up business. Everything from forklifts, sky tracks and cranes to road equipment and timber equipment is needed.