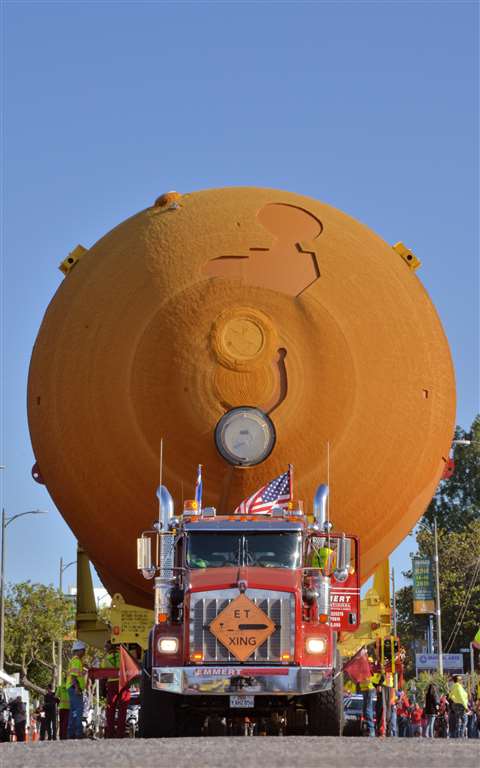 The Space Shuttle Endeavor completed 25 missions, but the 26th mission – transporting the only remaining external fuel tank to the California Science Center in Los Angeles – was awarded to Emmert International. In the spring of 2016, Emmert began “Mission 26, ET-94 Comes Home,” the final and epic journey of the 66,000-pound, 155-foot long, 30-foot wide and 35-foot tall external fuel tank known as ET-94.

Because ET-94 is the last remaining one-of-a-kind historic relic, stipulations imposed by NASA and the Science Center dictated that throughout all phases of the project the fragile foam insulation coating that surrounds the tank’s exterior would not be damaged by lifting operations, lashings, transport operations or contact with any obstacles during the process. Through extensive analysis and research, Emmert’s specialists spent 3,400 hours designing the ideal method of rigging, transporting and routing the historic tank.

Emmert used a hydraulically adjustable four-dolly transport system that interlocks with the existing ET-94 staging and transport system. Using Emmert’s dolly system in this configuration allowed maneuverability of the cargo and met requirements of NASA’s engineers, the Science Center and state and local jurisdictions.

The ET-94 had been stored at the Machouod Facility in an area close to where it would be loaded onto the barge for the first part of its nautical journey. The first initial challenge for the Emmert team was finding the best location to transfer ET-94 from the barge to land for its journey through the streets of Southern California to the California Science Center in downtown L.A. After an exhaustive search, it was determined that the best offload area would be Marina Del Rey, which had its own set of problems. Marina Del Ray is primarily a pleasure craft marina with no active barge or commercial work areas. Emmert developed a detailed study that included an overhead obstruction plan mapped in three dimensions. After extensive analysis, the final route from Marina Del Ray to the Science Center was just over 16.5 miles. Determining the final route required engineers traveling hundreds of miles to verify the exact height and width, and unforeseen obstacles.

Hauling a huge tank through one of the most highly populated areas in the U.S. required extensive traffic studies and planning. Emmert’s engineers had to overlay the transporter using two and three-dimensional modeling with verified satellite images to determine the most efficient and effective route to minimize the impact on the public. The load consisted of the lead (pull) tractor and the four dolly transporters carrying the cargo. California Highway Patrol worked in conjunction with local law enforcement to control traffic and safety.

Weather conditions were uncertain on the day of the barge departure. A second tugboat was called to safely maneuver the ET-94 against strong winds in Louisiana’s many canals. On its voyage, ET-94 passed through the Gulf of Mexico, the Panama Canal and cleared customs in San Diego before arriving in Marina Del Rey, even encountering and rescuing four stranded fishermen off of the coast of Baja from their sinking vessel and safely transporting them to San Diego.

Upon arrival at the Marina Del Rey dock, Emmert slowly drove the ET-94 off the barge to the designated staging site where it was prepared for delivery to the project site. A week later, starting at 11 p.m., Emmert crews drove and walked along side ET-94 following the designated route. Utility contractors removed street lighting and traffic signals to make way for ET-94 as it crawled its way through the crowded urban streets. Incredibly, all utilities were back in place and operational 15 to 20 minutes after ET-94 passed a location.

Emmert executed the work using 1,500 crew hours steering the transporter on the pre-programmed advanced GPS verified route. For tight corners and crabbing maneuvers, the transporter was hand steered utilizing the engineered and plotted radius. In addition, it was necessary on certain sections of the route to adjust the running height of the dollies by lifting or lowering the hydraulic suspension cylinders.

Transporting the ET-94 from Marina Del Rey to the California Science Center took just under the 18 hours. Through extensive pre-analysis and research, Emmert International was able to complete the project safely, securely and without incident or cargo damage. Thousands of onlookers watched ET-94 inch its way through LA. The exhibit will show the Space Shuttle and external fuel tank in launch position.