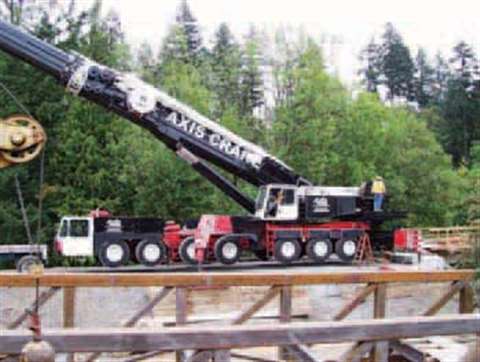 Erecting a four-span pedestrian bridge in Tualatin, OR was exacting work for Axis Crane. A complex pile driving and lifting project, the job involved installing a 220 foot temporary work bridge, driving piles, and setting box beams and a prefabricated steel structure to create the 380 foot pedestrian bridge which also housed two 42 inch intake pipes for a nearby waste water treatment plant, according to Tyler Mayfield, president of Axis.

A community improvement project, the new bridge spans the Tualatin River, which winds through a scenic park in Tualatin. “The client was the Tualatin Department of Parks and Recreation and the bridge links two sections of the park and makes for a beautiful running, hiking and bike trail,” Mayfield says.

The first phase of the project for Axis was to install the piles on which the bridge sections would be placed. Separate contractors completed the dirt work and the concrete work involved in linking the massive steel spans, which was trucked to Oregon in four sections, 10 feet wide by 70 feet long. Four sections came to the site and were bolted together onsite.

To set spans 1, 2, and 4, Travis Wilt, senior vice president and project manager, says they chose the company's Link-Belt HC-268 rigged with 160 feet of boom. Spans 1 and 2 were set from the work bridge and Span 4 was set from land off the end of the fifth abutment.

Setting the longer and heavier Span 3 required two cranes, Wilt explains. This span was lifted and set into place using the company's Demag AC 1200 rigged with 129 feet of boom with the Superlift and 269,000 pounds of counterweight. For this lift the Link-Belt HC-268 was rigged with 110 feet of boom.

“The AC 1200 was set up on the fifth abutment,” Wilt says. “With the cranes in place, the prefabricated Span 3 structure was lifted off the side of the machine, swung around to the rear, and temporally set down on the pre-stressed box beams of Span 4. The HC-268 was set up on the work bridge and rigged onto the end of the structure while the AC 1200 re-rigged to the other end and the two cranes jointly set the structure into final position. The AC 1200 had to handle 95,000 pounds at an 88 foot radius.”

Mayfield says there were many unique aspects of this project, with the engineering ranking the highest. “The engineering firm did a lot of engineering and design to accomplish the lifting of the spans,” he says. “The work bridge was designed to accommodate the 250 ton crane to be able to sit on the end and set the final bridge span.”

With branches in Seattle, WA and Portland and Albany, OR, Axis Crane maintains a fleet of cranes from 50 to 500 tons, and services the Pacific Northwest region. The company specializes in providing traditional crane services as well as pile driving.