SPMTs are among the most prolific rigging tools in the world.

The self-propelled modular transporter, better known as the SPMT, is the most revolutionary rigging tool to be introduced in the last 40 years. While cranes make the headlines, the often behind-the-scenes SPMT is one of the most flexible, efficient and cost-effective rigging tools and is suitable for a wide variety of projects. From power plant equipment to refinery vessels to bridge sections, the SPMT is often a part of the most complex rigging operations. 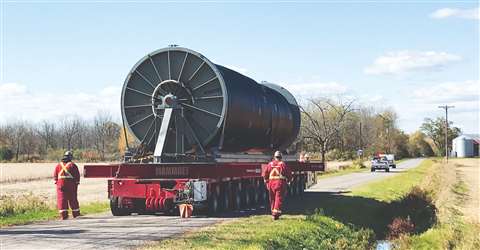 A SPMT is a combination of multi-axle platforms that are operated through a remote-control power pack system that allows for multi-way steering. The modularity allows for unlimited configurations by adding axles (or lines) to the length and width of the trailer. This helps to distribute weight and provide for accurate steering. While the SPMT often falls into the specialized transportation realm, it can also be used as a tailing device, a lifting device and as a towable trailer.

“They are modular, easy to ship, easy to assemble and easy to mobilize in short notice to almost anywhere in the world,” said Piet Nooren, vice president and technical director, Mammoet Americas. “We use them to move objects in almost every direction, and with millimeter precision in some cases.”

As tailing devices, SMPTs can upright vessels from horizontal to vertical while assisting crane lifts. They are used as jacking assistance in rapid bridge replacements and as transport means to move draglines over some of most unhospitable terrain there is, Nooren said.

“We’ve used them to transport planes, ships and just about everything imaginable that needs to be moved,” said John Rowe, Mammoet’s sales and marketing director. “Most recently, we’ve utilized SPMTs to move modules over 10,000 tons, supporting the GCGV project in South Texas.” 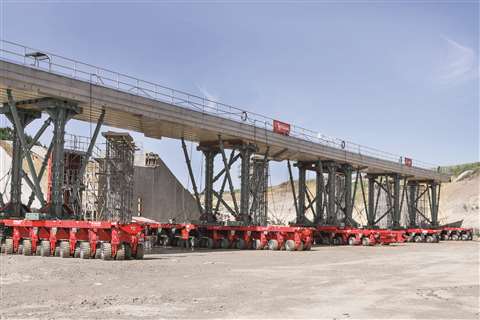 The first SPMT was launched in 1983 as a joint effort between Scheuerle and Mammoet.

“We’re proud to have been involved with the design, utilization and implementation of SPMTs, and very proud to have one of the largest fleets of these machines in the world,” Nooren said.

Goldhofer started producing SPMTs in the 1980s, and today Goldhofer and Scheuerle produce most of the SPMTs used around the world. Faymonville’s Cometto division and Enerpac also produce SPMTs.

The U.S. Department of Transportation has recognized the SPMT as a machine that has “the ultimate flexibility and speed in moving and installing bridges.” Using the Accelerated Bridge Construction (ABC) method, SPMTs are the tool of choice to move, lift and install new bridges quickly.

“ABC is a paradigm shift in the project planning and procurement approach where the need to minimize mobility impacts which occur due to onsite construction activities are elevated to a higher priority,” according to the FHWA.

Mammoet even moved its 32,000-square-foot building in Houston into place using SPMTs. American Cranes & Transport covered this event in 2011. The company also used an elaborate SPMT system to move its head office building onto its foundation within the Port of Rotterdam in The Netherlands.