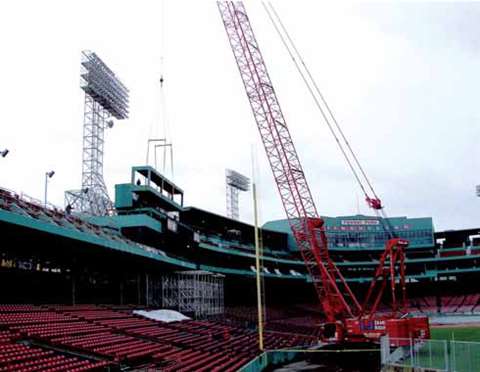 So when the historic park was prepared for renovations, Capco Steel and Fabrication of Providence, RI was called to the plate. Construction work at Fenway Park is constricted, exacting, and cramped, owing to the fact that the park was opened on April 20, 1912, a day in which news of the Titanic sinking shared the headlines. It is the oldest stadium in Major League Baseball.

Located in the industrial Fens District of Boston, streets are narrow and buildings built in the middle of the last century surround the field. Only a few parking lots are located close enough to the construction site to stage crane erection and steel delivery trucks. “Every project is replete with its own unique challenges,” states Paul Fioravanti, vice president of operations for LJ Crane Co., also based in Rhode Island, and who provided the cranes and logistics for the job. “We always say that the best opportunities are the result of daily challenges that we've prepared ourselves for.”

The primary challenge that LJ Crane faced was getting its 2006 Manitowoc Model 2250 with 290 foot of boom into the stadium and set up to work. LJ Crane was competing against two other crane companies that maintained that the job could only be done with hydraulic cranes, and that a conventional crane could not be constructed in the confines of the baseball field, which measures 310 feet (94.5 meters) down the left field line: 379 feet (115.5 meters) in left center field; 390 feet (118.9 meters) in center field; 420 feet (128 meters) in deep center field; 380 feet (115.8 meters) in deep right field; and 302 feet (92 meters) down the right field line.

Paul Izzo, owner of LJ Cranes, and not one to back down from a challenge, affirmed that the 350-ton crane could work and at a substantial savings compared to the large hydraulic cranes proposed by the other companies. Components were brought in through the “Green Monster” doorway, measuring only 12 feet high and 14 feet wide. The “Green Monster,” a source of Red Sox fan pride, is the famous left-field wall, which measures 37 feet (11.3 meters) high. Izzo oversaw all aspects of delivery and set up of the monstrous crane. Twenty tractor trailers and two set up cranes delicately assembled the Manitowoc, placing the crane at home plate and stringing the boom out down the right field foul line to the Pesky Pole, another famous landmark of the park.

It took two full November nights to set up the crane. According to Josh Wilbur, estimator and superintendent with LJ Crane, “when people coming to work in Boston saw that crane boom hanging in the air over the stadium, it was pretty amazing!”

Crane operator Mike Morgan, a member of International Union of Operating Engineers Local 4, had his work cut out for him, especially when removing and replacing the large light poles from the construction area. Booming out 170 feet, he handled the 35,500-pound poles with ease.

Steel and precast delivery trucks were staged in the street outside the stadium, where Morgan had to boom out over the stadium to reach them. A 30 foot wide alley lined with steel plates was created along the first and third base lines, which gave the crane only a foot on each side of the crawlers to maneuver. When the project was completed in March 2008, general contractor Berry Construction of Boston delivered 850 new seats for fans.

LJ Cranes has grown quickly since the company's 1999 austere inception in Cranston, RI. Today, LJ's cranes have worked throughout North America and revenues are five times greater than only three years ago. According to Fioravanti, “by making a large capital investment in the most desirable equipment and making the commitment to customers, our business plan continues to fuel our growth.”

Fioravanti is making reference no doubt, to LJ's stable of more than 70 cranes. The company's Port of Providence yard has seven acres with rail and shipping dock sites. Over four acres are under roof for equipment protection and maintenance. LJ Cranes has cranes from 8.5 ton to its newest 550-ton 2008 Grove GNK 7550 hydro. Many of its new cranes were purchased from Shawmut Equipment of Manchester, CT, including the Manitowoc Model 2250 used at Fenway.

Besides the constrained working conditions, national media and political attention was also keen before and during the project, according to Fioravanti. Various Red Sox stadium options had been copiously reviewed by teams of committees and preservation groups, including demolition. The decision to preserve, maintain and renovate the stadium came in 2002, when New York media mogul and Harvard graduate Tom Werner, along with businessman John W. Henry, purchased the franchise for $660 million from a trust headed by Bostonian John Harrington. They also bought Fenway Park, with the express goal of winning a championship, which they soon realized in 2004 and again in 2007.

Janet Marie Smith, senior VP of planning and development for the Boston Red Sox and architect behind the redesign of Fenway Park, used the facility as a paradigm to show the rest of the country how refurbishing a cherished relic can work out successfully. The new Red Sox owners, instead of demolishing and relocating to a new complex, invested over $150 million dollars of their own money for improvements. Citing both sentimental and economic reasons, the owners first added “Green Monster seats” behind the famous left-field wall.

According to a New York Sun editorial last fall titled, Fenway's Example, “the Red Sox made their way to their second World Series victory in four years while playing in a ballpark that is 95 years old.” The article went on to say, “one of the arguments the team owners (in New York) have made in seeking approvals for the new stadium is that they can't be competitive – i.e., win – while playing in an old stadium. Yet here the Red Sox have managed to win two World Series while playing in a swamp in a park that opened its doors in 1912.”

Such a high visibility venue turns up the pressure as well from the local media and the general population, who hold the site so dear. Contractors are observed closely for any mistake. One mishap occurred in November 2007 when an ironworker, using a cutting torch, created a blaze. Boston Firefighters contained the damage quickly, although they had some difficulty maneuvering their hoses through the construction site. According to Steve MacDonald of the Boston Fire Department, “Everything that was damaged was going to be thrown away anyway.” Even though the event was minor, the Boston Herald printed the story.

When Boston's “Boys of Summer” returned from spring training in Fort Myers, FL last month, they opened their home season on April 8, in a spruced up Fenway Park, bustling with the spirited red and white accoutered crowd. Young players like pitchers Jonathan Papelbon and Curt Schilling, and Japanese favorite Daisuke Matsuzaka, outfielder Manny Ramirez and third baseman Mike Lowell are likely savoring Fenway's ambiance of yesteryear, making history of their own, while their fans enjoy new seating and amenities at “the old ballpark in the Fen,” as locals call it.

At last it's time again to “Play Ball!”