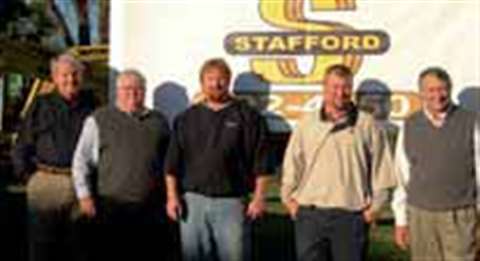 Stafford Equipment, the Georgia-based distributor of Terex and Kobelco cranes, has acquired Virginia-based Scott-Gallaher, Inc., based in Roanoke, VA. Scott-Gallaher, which has been in business for 22 years, sells Kobelco and Broderson cranes and a range of construction equipment brands including New Holland, Terex, Atlas Copco and Allied Hammers.

John Wall, Stafford president, said that the acquisition has been in the works for several months and will allow Stafford to expand further into mining and quarrying-related industries.

Scott-Gallaher CEO Ron Scott will remain with Stafford as a senior vice president. “We're very excited about becoming a part of Stafford's team,” said Scott. “I've been watching Stafford's activities across the region and know that they are very serious about providing quality machines and backing them up with a strong parts and service commitment.”