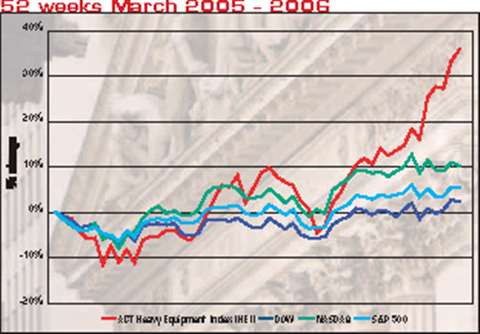 The key issues of oil and interest rates that caused the markets to waver in late January still remain. Oil is still above $60 per barrel, and although the end must be in sight for the Fed's policy of interest rate hikes, one or two more 0.25% rises can still be expected before things flatten out.

As ACT went to press, Ben Bernanke was preparing for his first meeting as the Fed's chairman. That late-March meeting was widely expected to result in another 0.25% hike in short-term interest rates (to 4.75%), but perhaps more interesting will be Bernanke's speech, which might give some indication of future policy. There is a feeling that the end is nigh for interest rate hikes, with inflation coming under control following the last two years of commodity price rises.

Despite the negative implications of high oil prices and March's expected rise in interest rates, the stock markets are performing well. Late February saw the Dow break through the psychologically important 11,000-point barrier, its highest level for almost five years.

As an aside, stock markets in other parts of the world are similarly buoyant. The European bourses have been putting on steady gains for the last 18 months or so, and like the Dow, are close to five-year highs. In Asia, the Japanese stock market rallied spectacularly in the second half of 2005 thanks to a promising, and somewhat unexpected, turnaround in the hitherto stagnant domestic economy.

Improving corporate profits have been a key driver for the stock markets, and this is essentially what has lifted the Dow, NASDAQ and S& P 500 over the last few weeks. But one of the key longer-term factors is the surge in mergers and acquisitions (M& A), which is linked to the rock-bottom cost of borrowing.

Interest rates may be on the rise in the US, but over the last 18 months, it has pretty much been the only part of the world that has done this. Even though rates have gone up, 4.5% is still low in historical terms. In Europe, interest rates in the 11-country Euro-zone have gone up twice recently, each time by 0.25%, but the headline variable rate is still just 2.5%. In Japan, of course, the interest rate has been 0% for several years, although the recovering economy might be able to cope with a hike later in 2006.

This availability of cheap money in turn makes corporate acquisitions cheap, and these inevitably boost the markets. For a takeover to be attractive to existing shareholders, the acquirer has to offer a premium on the prevailing share price, and this is one of the reasons the mainstream indicators, most notably the S& P 500 and NASDAQ are showing good gains for the last 12 months.

In contrast, there haven't been any really significant acquisitions in the heavy equipment sector for several years now. The spectacular growth of the ACT HEI – 35.6% for the 52 weeks to the start of March – is down to solid financial results. Some of the component companies of the HEI are now achieving operating profit margins of 10% or more.

This is a lot better than during the last peak in the market around 1999 and 2000, when margins were only around the 5% to 7% mark. This also mean America's equipment manufacturers should weather the next downturn better, and that could come later this year.