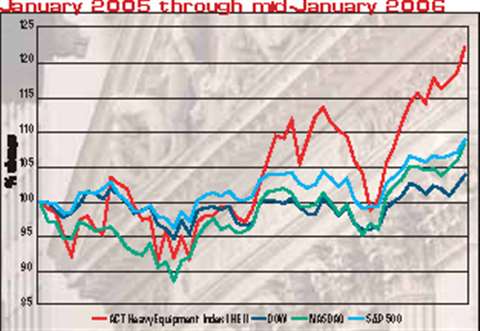 Although 2005 was a fairly nondescript year for shares, the markets managed something of a rally in the final few weeks. This buoyancy continued into 2006, with the Dow putting together a few weeks of gains to take it through the 11,000 point mark for the first time in more than four years.

Up-beat consumer spending data was the key driver behind this rise. It seems from this information at least that the high price of commodities such as oil, and continually rising interest rates, are not having a detrimental effect on the economy. With oil prices looking relatively stable around the $60 per barrel mark, worries about on-going inflation are diminishing, and this is helping the general economic outlook.

Heavy equipment manufacturers are certainly seeing this in their share prices. ACT's Heavy Equipment Index has followed a similar pattern to benchmarks like the DOW, NASDAQ and S&P 500, with the added bonus that the rise has been much steeper. While these mainstream indicators have risen 8 to 12% since late October, the HEI is up more than 20% over the same period, and hit a new high of 122.32 points in mid January.

The only real weakness in the sector is with Deere and CNH, which are both clearly suffering from weak demand for agricultural equipment. These were the only two companies to see their share prices record a net fall over the course of 2005, while other companies recorded double-, and some even triple-digit gains over the year.

Key to this surge in share prices has been corporate profitability. Although sales revenues have been rising since mid-2003 in the sector, the sudden jump in demand, combined with rising steel prices made it difficult for companies to increase profits in the early part of the up-swing.

That changed to some extent in 2005, with a succession of list price rises. However, long order backlogs are still an issue that is holding back profitability, as many companies admitted in their third quarter earnings releases.

Against this backdrop, there is still scope for more share price rises in the early part of 2006. Underlying profit growth in the industry is running at an impressive 9% per quarter, based on Q3 numbers. Although this rate of increase is slowing, there looks to be a good few more quarters of growth before the market turns.

This of course is the crucial question for 2006 - will the market turn, and if so, when? What happens at home in the US will be a big factor of course, but what makes the current cycle different to those that have gone before is the influence of China. Demand for heavy construction equipment in China is booming again, following a period of cooling in 2004. With the market for wheeled loaders well above 100,000 units per year, and excavator sales around the 30,000 mark, China is much bigger in volume, or tons of iron (although not in dollar terms) than the US market.