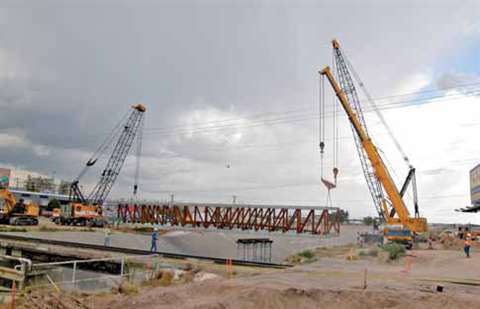 As economists continue to forecast shaky times ahead for the US economy, it appears that the Southwestern region of the US has yet to feel a blip. Crane and transport companies in Texas, Arizona and Oklahoma report little to no slowdown in their business.

While the homebuilding sector is still reeling from the subprime debacle and a glut of homes on the market, Dan Mardian, Jr., president of Marco Crane & Rigging, says the last couple years in Arizona are the best he can remember in many years. Based in Phoenix, AZ, Marco Crane & Rigging has enjoyed a strong market, Mardian says, assessing that the home building crisis actually helped fuel other sectors of business.

“The American dream of owning your own home has helped the strong economy of the past couple of years” says Mardian. “With the homebuilding going down and the financial crisis that the economy is experiencing we have become more cautious.”

He says this situation will affect the rest of the economy down the road.

He says the speculation and uncertainty in the media is not helping the economy. In fact, he says this forecast, as presented by the media, is what is pushing the economy down.

So what are the measures he is taking to hedge against a downturn?“The strong markets we have enjoyed have created a 'gathering' mentality for the sales force. We are now shifting back to a 'hunting' mentality to grow our market share to maintain sales. The crane suppliers we use are still sold out and we are still ordering equipment that is six to 18 months out” he says.

Another interesting tactic Mardian is employing is training. Marco has developed a portable crane simulator training vehicle that can travel to different sites.

“We're going to be using something similar to the CCO practical exam in the simulator. It's called Mobile Crane Training” he says. The simulator works like a video game, with points scored for accountability. Mardian says that before his new crane operators are put in the field, they need to use this program first. The training unit will be ready in three months, he says.

Competitor Southwest Industrial Rigging Inc., also headquartered in Phoenix, reports good news. The company has experienced 20% growth each year, says owner Harry Baker. Southwest also does some work in Texas and New Mexico, and according to Baker, anticipates a lot of upcoming work in Idaho.

“It's always hard to tell where that [strong business] comes from” says Baker. “Maybe bad weather and people moving out here. It's good or a little better than good in Arizona.”

However, he does predict that 2008 will be little less prosperous than the last fewyears. He believes this year and next will “hold steady” or perform a little less than previous years. However, like Marco, Baker says he plans to invest more this year and build his fleet. “I have made significant purchases in the last couple years. I still have some purchases planned, some expansion plans as well” Baker says.

The company bought five new cranes in 2006, and 10 last year, with deliveries of those units trickling in. “They are all terrains and rough terrains and crawlers: I got Grove, Tadano and Manitowoc right now” he says, adding that Southwest Rigging became the new Arizona dealer for Kobelco.

Southwest Industrial Rigging has also invested in its safety and training facility. “We have a state of the art facility with hands-on labs and CCO certification, forklift certification, personnel lift training, in Phoenix” Baker says. “We started this about two years ago but it was really more in-house. But we found there such a need for real hands on training that we've expanded that pretty significantly. Who better to teach other people than us? Our goal is to significantly impact the industry from a safety and training standpoint.”

“The declining economy has had little impact for us” says Jim Mussmann, vice president with Precision Heavy Haul Inc of Tolleson, AZ. He says the company has been fortunate with several specialty projects over the last couple years, and he says 2007 was the best yet for the company.

Mussmann says it is too early to forecast what the next couple years hold in regards to a “better or worse” condition. However, he thinks that if the company continues its level of service, it will grow with the supply and demand of specialty projects. “The commercial and utility market has been in strong demand during the last year and the trend is continuing into 2008” says Mussmann. “We work heavily in conjunction with different companies insuring power generation equipment is delivered and placed for our customer in a seamless manner. Remaining committed to customers' continuing needs, leads PHH to believe the future has a very promising ft outlook.”

Part of the company's confidence I for the future is because it has several I projects lined up for 2008 and says more bids continue to come in.

In regards to new purchases, PHH I has added four 2007 heavy haul I tractors and trailers, including one 9-I axle lowboy, three 9-axle suspension I beams, one-8 axle deck and beam trailer, two 4-axle steerable dollies, several in-house custom made-to-fit -' components, a forklift, eight digital read out scales and various rigging gear. “All the additions have made us more versatile than ever” says Mussmann.

Wilson says New Mexico doesn't have a great pull of development in the area, adding that occasionally the company has found niche work in movie production and at ski resort projects. Overall, he predicts slower growth in 2008.

This being an election year, Wilson says his management team is curious about the outcome of the presidential election and other races and what the newly elected will do with energy initiatives in the state. “What fears us depends on what the feds will spend” says Wilson. “We have a little bit of energy work in the Southeast and the Northwest corners of the state.”

Given the uncertainty that Wilson thinks about the New Mexico stream of work, he says the company has expanded to supplement its line of work. He says the company is still adding to its fleet of 78 cranes. The range of these units spans from 8.5- to 500-ton capacity. The company also has a heavy haul fleet and offers services in 48 states. Currently it has 25 trucks and more than 60 trailers. “That business helps supplement when you're not moving your cranes” says Wilson. “When you have a fleet this range, you have to have fill in work and that's where heavy haul comes in.”

The move to Texas seems a good choice for Crane Service Inc., as other companies in the Lone Star report nothing but good. Donnie Davenport, a partner in Davenport Transport

Davenport Transport & Rigging, which has been in business since 1973, has a fleet size of 12 prime movers and 38 lines of Goldhofer and Scheuerle hydraulic trailers.

“We don't see a let down at all this year. I would think it's going to get busier” Davenport says, citing plenty of refinery expansions and environmental projects.

La Grange, TX-based Ray's Crane Service is smiling all the way to the bank. The company reports a very strong last couple of years. Rental Manager Brad Goodspeed says the company has prospered from a steady stream of oil field and specialized work. The company services areas throughout Central Texas.

I would say we're starting off pretty

I strong this year, says Goodspeed.

The company has eight cranes from 15 to 175-ton capacities and represents such brands as National boom trucks, Terex, Link Belt, and Grove, all truck-mounted cranes, says Goodspeed, who reports no major investments this year, though.

From the manufacturing perspective, Kobelco Cranes North America, based in Houston, reports a “robust” economy. General Manager Jack Fendrick says the company has seen an increase in all facets of its business.

But will things remain the same?“Forecasts are always a difficult chore, but based on the available information we see the crawler crane market staying strong,” says Fendrick. “All indicators point to strong a demand for new or rebuilt bridges, power plants, wind energy, airport expansion, university construction and refinery construction. The markets we think may be in decline are ethanol plants, commercial building, local school construction and high rise condominiums.”

Fendrick says the worsening residential market has impacted the company to some degree. The residential issue has affected commercial building – in that same store expansion, local school construction and new high-rise condominium construction has cooled off due to fewer new neighborhoods being built, he says. The other negative that could be felt is a tightening of lending policies due to the credit crunch. “This could affect some of our customers' ability to finance equipment” Fendrick says.

On the flipside, though, crawler cranes are not used in typical housing construction and with record global demands for these machines, plus the manufacturers' limited supply, this market should remain strong for the foreseeable future, he says.

Up north in Oklahoma, business may be slower, reports Justin Brammer, owner/operator of heavy haul transport business Brammer Co. LLC, based in Marlow, OK. “I would describe the economy's effect on Brammer Company, LLC business as slow with steady growth” he says. Yet, Brammer thinks that over the next year his company will move ahead, business-wise, as it moves into a different market of the transportation industry. The company is acquiring a trailer that will give Brammer the ability to transport 80-ton freight. The Trail King HDG140 double drop will be delivered to the company in May 2008.

The company is involved in several projects directed toward the wind energy market.

Braden Hodges, project manager for Northwest Crane Service L.L.C., based in Oklahoma City, OK, says the economy in his company's region of operations is booming.

“The natural gas, wind generation and general construction sectors of our market are strong and very busy” he says. “We forecast continued growth in the years to come and look forward to meeting the crane and transport demand in our market. We are very busy with projects in all of the industries that we serve.”

Among the highlights of Northwest Crane Service's year is the unveiling and delivery of its newest crane, the Liebherr LR 1600/2. Northwest will take ownership of the new LR 1600/2 at Con Expo in Las Vegas.

Despite the strong or at least encouraging reports on business activity for companies in the Southwest region, it will be interesting how this region signs off on 2008. Given the forecasts of Arizona housing way down and the state following Florida and California into a recession, and with lukewarm activity reported in New Mexico, the steady growth predictions could cool a lot sooner than forecast. Stay tuned.