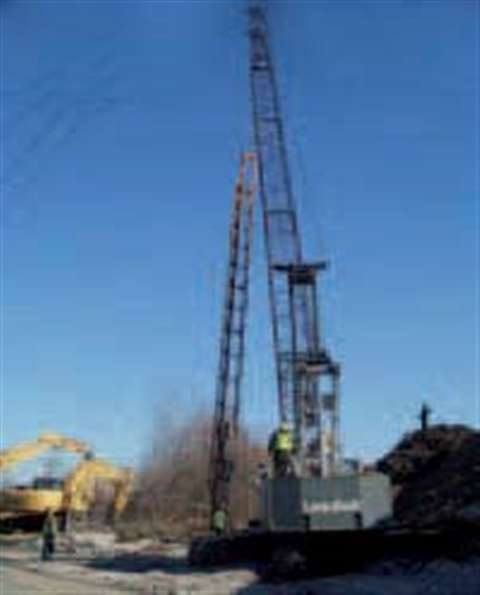 With 28 bridge decks to dismantle and reconstruct, the Super 70 reconstruction project in Indianapolis will require major pile driving, according to general contractor Walsh Construction. Two Link-Bel

At long last, Indianapolis commuters and transportation of cials agree the time has come to update and refurbish the old Interstate 70 between the north split with Interstate 65 and the east leg of Interstate 465. The $175 million project, which officially kicks of this month, is being billed as one of the most aggressive construction projects in the history of the state. It is also among the most expensive, tagged as the largest single road project in state history

“For a long time, one of the things we ran into in getting this project approved was getting over the denial stage in the minds of our local residents,”says Andy Dietrick, director of communications for the Indiana Department of Transportation (INDOT). “They didn't want to deal with the agony of closures and [trace re-routing.] But we've made some tweaks without messing with mobility or safety and the entire project will happen in a nine-month time period.”

It's to the point, Dietrick said, that the highway is in such bad shape he can't believe there's anyone who wouldn't want the project to happen, even though traffic re-routing will cause havoc for commuters.

Thus far, more than a dozen cranes have been marshaled along the freeway, most of them crawlers and RTs owned by Walsh, according to J.R. Collard, senior project manager for Walsh Construction and the overseer of the Super 70 project.

“We have two 80-ton crawlers and a dozen 150 ton RTs on the project and there will be many more cranes needed,”he says. “For the most part we use the cranes in our fleet.”

But local crane rental companies will also get a piece of the Super 70 pie, with Maxim's Indianapolis division already supplying a 120-ton crawler working two nights straight in January doing bridge prep work. With the project calling for the replacement of 28 bridge decks, a range of cranes will be needed for demolition and reconstruction.

“It's a large scale project on a fast track,”says Randy Carson, of Maxim Crane Works of Indianapolis. “Right now they are doing a lot of pile driving necessary for the bridge work.”

When complete, the new freeway will be much safer due to design changes related to exit and entrance ramps. According to INDOT, almost 180,000 vehicles use the congested six-mile stretch of interstate every day. The roadway was first constructed in the early 1970s and it has never been refurbished. Dietrick says pavement and bridge decks are deteriorating, inside shoulders are too narrow, motorists have difficulty seeing around curves and vertical clearance at many of the bridges is too low.

Construction will occur between June 2006 and June 2008, with the major of daytime lane reductions occurring from February 2007 to early November 2007, according to INDOT. Construction will be completed in phases and the contractor will be working around the clock to complete the major aspects of the project. INDOT anticipates that the work on the north side of I-70(Phase 1) will take place from March through July 2007, with two-way traffic maintained on the south side of I-70, and that work on the south side of I-70 (Phase 2) will take place from July through November 2007, with two-way traffic maintained on the newly reconstructed north side of I-70.

Because I-70 is a major artery through the city, the contractor will use a moveable barrier system during construction, allowing for three travel lanes inbound and two outbound during the morning rush hour, and three lanes outbound and two inbound during the afternoon rush hour to maximize traffic now. This innovative new system has been used with success in other cities throughout the nation, and Dietrick says from what they have observed, it will work well for this project.