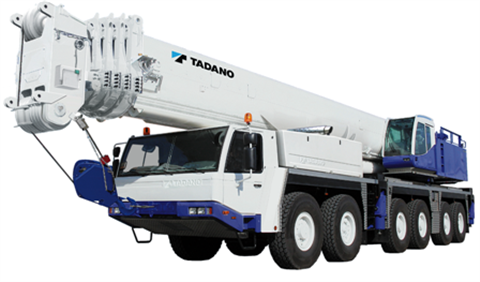 Tadano’s new 450 US ton capacity all terrain crane has arrived in North America. The six-axle ATF 400G-6 was designed for simplicity of use with market-leading technology, the company said. Features include powered luffing jib, Tadano’s exclusive Lift Adjuster, the release adjuster load sway prevention, power system and a Mercedes-Benz BlueTec engine. The company says the new engine makes it the cleanest, greenest crane in its class.

The five-section boom extends from 49.2 feet to 196.8 feet under partial load. With the luffing jib, maximum tip height is approximately 400 feet.

The chassis is powered by a Tier 4 Interim eight-cylinder Mercedes-Benz OM 502 LA diesel engine with BlueTec, generating 653 horsepower. Tadano is the first crane manufacturer to use Mercedes-Benz BlueTec emissions reduction technology across its range as standard, the company said.

Also a first, Tadano said, is the 12x8x12 configuration with ZF-Servocom steering system. On the highway, rear axle steering is speed-dependent. First and second axles are permanently steered while axles four and five lock in the straight ahead position when a speed of 18.6 mph is reached. Axles three and six lock at 31.1 mph.

The crane upper is powered by a six cylinder Mercedes-Benz OM 926 LA engine, rated at 265 horsepower.

A key feature of this crane is the strength of the boom, Tadano noted. Load chart highlights, with the maximum 304,235 pounds of counterweight, has the ability to lift 83,800 pounds out to a 46 foot radius with the boom fully extended.

“The 196.8 foot main boom achieves higher capacity than comparable cranes and is so robust that it can lift weights without a guy wire and can be additionally equipped with the power system to further increase the lifting capacity,” Tadano said.