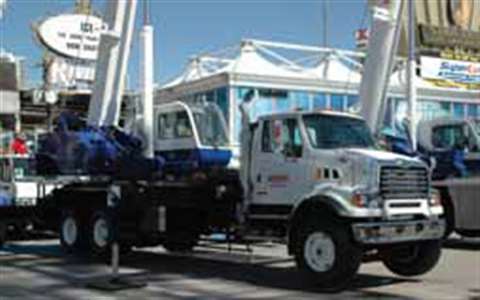 Tadano launched the prototype of its new 35 ton truck crane for the North American market. The TM-35100 has a four-section synchronized telescopic boom with a fully extended length of 100 feet. The two stage jib, which is stowed on the base boom section, has a 50 foot reach.

The model also offers continuous 360 degree full circle swing on a ball bearing turntable, said the company. There are four hydraulic three-section beam and jack outriggers. Each outrigger beam and jack is controlled independently from either side of the truck, while three extension lengths are provided with corresponding “rated lifting capacities for crane duty in a confined area.”

“With its strong boom and long radius capacities, we believe the TM-35100 is one of our most desirable cranes,” said Tadano's Ron Dogotch. “This crane comes standard with air conditioned cab as well as comfort features found on larger cranes.”

Manufacturing of the crane is set to start in June 2008, with delivery of the first machine due in August 2008.