Unveiled at the Bauma 2019 tradeshow, the Tadano GTC-2000 telescopic boom crawler crane was an anticipated a development. Following Tadano’s acquisition of Demag in August of last year, the crane is being relaunched as the Tadano GTC-2000. 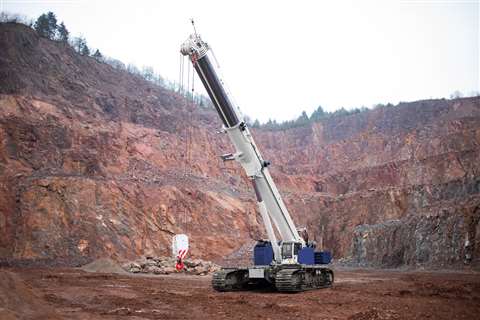 Following Tadano’s acquisition of Demag, the telescopic boom crawler crane is being relaunched as the Tadano GTC-2000.

“Our goal is to become ‘One Tadano’. With the first telecrawler produced in Germany and branded by Tadano, this vision is now becoming a reality,” explained Ingo Nöske, director product management, crawler cranes. He added that this will strengthen cooperation between German and American colleagues in the Tadano Group in the future. The group can take advantage of synergies and the “best of both worlds” can flow into the development of new products – as is the case with the GTC-2000 telecrawler, which has the Demag IC-1 Plus control as well as the IC-1 Remote telematics system technology.

The crane closes the gap between the 140 and 240-ton capacity classes, the company said. The Tadano GTC-2000 has an actual lifting capacity of over 170 tons and a maximum load moment of 590 meter-tonnes. It has a track width that can be adjusted as necessary in both symmetrical and asymmetrical configurations so that it can be used for applications in which space is at a premium, such as bridge construction projects.

It is also perfect for doing construction work, where it is not only able to move and telescope components, but also luff down and retract the boom and then travel underneath roof structures to get to where it needs to be. In addition, the crane is also able to bring its strengths to bear as an assist crane, as well as when carrying out wind turbine pre-assembly work. And since the load charts for its 196.9 foot-long main boom are excellent even when lifting on inclines of up to 4°, its use requires less topographical ground preparation on-site than a lattice boom crawler crane.

With its main boom length of 196.9 feet, the GTC-2000 already features the longest reach in its class, yet it can be increased further if necessary. Main boom extensions with lengths of 16.4, 36.1, 55.8 and 75.5 feet that can be mechanically and hydraulically offset are available, meaning that a maximum system length of up to 272.4 feet is possible. The 16.5-foot extension can be folded onto the side of the main boom for transport to save space.