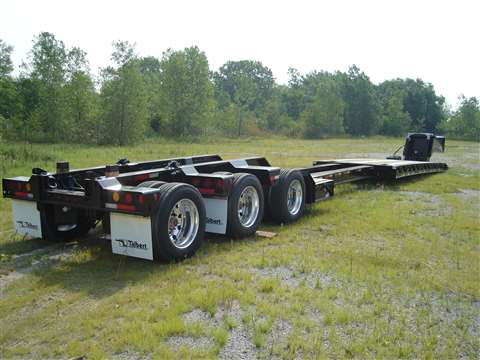 Talbert Manufacturing, Inc., a specialty-built trailer and transport system manufacturer, will show its multi-purpose 55-ton Telescopic Trailer; as well as its highly flexible Talbert SSTA (Traveling Axle) 5053 Trailer at the upcoming American Towman Expo 2011 to be held in Baltimore from Nov. 17-20.

The 55-Ton Hydraulic Detach Telescopic Trailer's spread axle capabilities allow a 2 + 2; or a 3 + 1 configuration and its tandem axle features connections for a third axle that can be flipped or removed. The unit is also equipped with connections for a future fourth axle. Additionally, Talbert said, the Telescopic Trailer is engineered with a pinned and hinged gooseneck extension that can be flipped. The ability to flip or remove the third axle, and the capability of flipping the gooseneck extension delivers "key advantages during empty travel by allowing haulers to retract to an overall trailer length that is less than 53 feet," Talbert said.

Among standard features, the Talbert 55-Ton Telescopic Trailer is equipped with air-ride suspension; Dura-Bright aluminum outer wheels; strobe lights at the rear of each axle; and a battery back-up that powers the lighting package when the trailer is disconnected from the truck cab.

The Talbert SSTA 5053 that will be exhibited at the show is equipped with a 20,000-pound planetary winch (15,000 pounds is standard). "Due to its direct drive system, the planetary winch is much preferred over the traditional worm gear design seen on many competitive units - and importantly, it offers up to twice or more the loading speed over the worm gear winch," the company said. "Talbert's planetary winch is conveniently operated via a multi-function wireless remote, allowing one operator to load and steer a piece of non-operational equipment without having to leave the trailer."

CATME conference confirmed for Dubai in March 2022
Paul van Gelder, Mammoet CEO, will be the keynote speaker at the third CATME in Dubai, UAE, on 22 and 23 March 2022
Loading...
Latest News