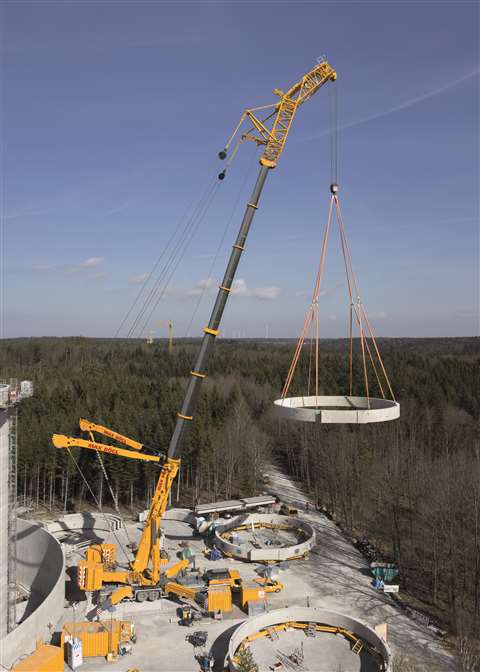 Water storage and turbine tower foundation in one. 40 metres is added to the height of the turbines by placing them on top of the giant storage tanks

Lifting specialist Max Bögl in Germany won a contract to erect the world’s tallest wind turbines. They are part of an energy storage project on which the company is using several models from its fleet of Liebherr mobile cranes. The turbines stand on large concrete water storage basins that are 40 metres tall, contributing to the 240 metre overall height of the turbines. 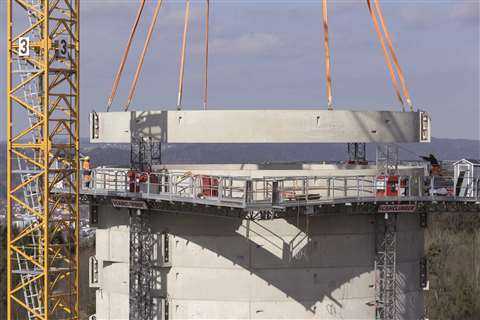 The 90 tonne concrete rings are 16 metres in diameter

Max Bögl is erecting the four turbines near Schwäbisch Hall in the north-east of Baden-Württemberg. Additional electricity will be generated when demand is high, in combination with a pump accumulator power plant in the Kocher Valley nearby.

A Liebherr LTM 11200-9.1 wheeled mobile hydraulic crane (one of four in the Max Bögl fleet) is lifting and placing 27 prestressed concrete rings for each basin. Loads of more than 90 tonnes are being lifted by the crane which is rigged with 202 tonnes of ballast. With the four concrete segments assembled into a 16 metre diameter ring they are then stressed using steel cables.

After building up the height in 1.5 metre courses, the same crane will be used to install the turbine tower sections on top of the tanks. Its other task will be to assemble the 630 EC-H 70 top slewing tower crane, also a Liebherr, for the remaining work on the towers. The saddle jib tower crane will then be climbed to a height of around 190 metres above the ground.