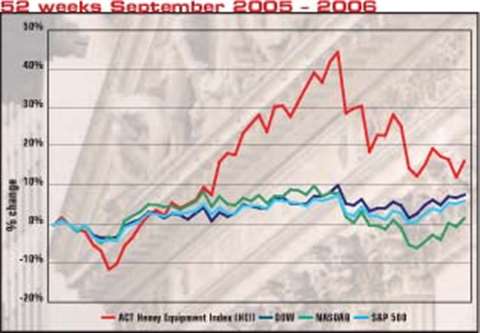 Share prices in the sector took off in a big way last November, and this steep rally continued for seven months. However, mid-May saw the sentiment flip from bullish (buying dominates and prices rise) to bearish (selling dominates, prices fall).

It was odd to see the markets fall so sharply, given how strong the industry's fundamentals were at the time, and remain today. Yes, oil prices, inflation and interest rates may be a worry, but manufacturers' backlogs are still growing, cranes are like gold dust and the construction and mining industries generally seem run off their feet... So why did share prices take a nosedive?

The first thing that happened is that equipment shares got overbought, and therefore over-valued during the rally. Realizing this, investors took their profits out of the market, and it is that strong selling sentiment that has prevailed since.

Share prices may be related to factors like economic growth and corporate profitability, but their behavior is also governed by the forces of the stock market itself. Factors such as the supply and demand for a particular equity can drive its price movement, irrespective of how much money it is making.

There is a branch of market analysis called Technical Analysis (TA), which ignores any sort of fundamental economic or corporate information. Instead it looks at trends in prices – these apparent market quirks – to make predictions using statistical tools.

So since share prices in the sector don't seem to have much to do with fundamental factors at the moment, what does TA tell us about the future?

One general rule is that periods of price volatility are followed by periods of stability (and vice versa). This seems true at the moment, with smaller weekly movements compared to the steep rises and losses seen earlier in our 12-month timeframe. This trend of relative stability could be one that continues.

Other TA tools such as Relative Strength Index (RSI) show the ACT Heavy Equipment Index is in a period of relative weakness. However, prices have not fallen far enough for them to be undervalued. Equally, a tool called Moving Average Convergence/Divergence (MACD) indicates weakness, but again, prices are not low enough for this indicator to give a buy signal.

TA also includes the concepts of support and resistance. Support is a level below which an indicator will not fall, while resistance is a high it cannot break. The more frequently these levels are touched (but not breached), the more entrenched they become, and the harder they are to break.

In the current bearish atmosphere, support is important (resistance comes into play when prices are rising). The graph shows two low points, around +12% for the year to date, which have been hit in the last 2 months, which could be the Index's support level. These points correspond to a value for the Index of 122 points.

The TA view then is that the ACT HEI will continue to fall for a few weeks, although there should not be any sudden losses. There seems to be a support level around 122 points, which the Index should not fall below. More bullish sentiment could emerge by early-to mid-October.