Although it specializes in designing and producing elite cranes for markets around the world, Terex Cranes also knows how to throw a great party. In October, the company hosted some 600 customers from around the globe in the lovely town of Zweibrücken, Germany, home of the company’s Demag manufacturing plants.

The centerpiece of the customer an;’d media event was the Demag AC 45 City crane.

The reason for the event was the relaunch of the City Crane range. The first model is the Demag AC 45 City, which was the centerpiece of five separate gatherings that were held in an airport hangar at the local Zweibrücken Airport. The Terex team rotated in customer groups every two days, showing off the new crane and the investments made at its all-terrain crane manufacturing facility. The final get-together at the end of the week was reserved for the media and trade press, who seemed just as impressed with the tour, presentations and the new AC 45 City as the customers who preceded them.

Kudos to the event planning team who threw these parties and developed an impressive light and music show to set the stage for unveiling the new crane. Confetti rained down on the crowd as the curtain was lifted and the new crane came into full view. Most impressive were heartfelt presentations by Terex President and CEO John Garrision and Terex Cranes President Steve Filipov. While the goal was to roll out a new crane, several other objectives were accomplished. The Terex team skillfully articulated that Terex Cranes is back on track and that they are excited about the future.

Garrison started his presentation by noting that he was celebrating his second anniversary with Terex. He termed it “an incredibly exciting two years.” In fact, Garrison’s first six months as president of Terex was fraught with calamity, including a possible merger with Konecranes and a proposed sale to Zoomlion. Neither happened. Once the dust settled on all that activity Garrison became focused on putting in place a management team that would execute his vision to create a lean, agile and profitable Terex. Garrison and his team appear to have accomplished this quite well. 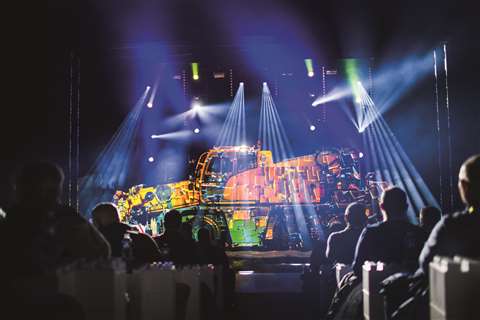 “The the most important thing we do, is to [create] a ‘zero harm environment,’ he said. “We start every single meeting with ‘how are we doing on safety?’ and discussing our safety results. Why is that? It’s quite simple. There is nothing that we do that is worth any of our team members, suppliers or customers getting hurt over. What these incredible machines do is inherently dangerous. So we always have safety at the forefront of everything. It is the most important thing we do.”

Garrison said that “if you look at the safety record of an organization, you can predict how well that organization does on other performance metrics.” He pointed to customer satisfaction, financial results and product quality.

“It takes that same high performance culture that has that a zero harm environment to deliver for a customer, team members and for shareholders,” he said. He also touched on corporate values.

“The Terex Way values are what attracted me to the company,” he said. “It’s about integrity and respect. We’ve become a pretty transparent organization.”

Through these core values, Terex team members can acknowledge if they have done something well, and if they haven’t, they take ownership and correct the process. He discussed some of the hard decisions that have been made, including the sale and shutting down of several facilities around the world, and the continual consolidation of the Terex footprint. He is optimistic that the company is fully poised to “take off” when the market picks up.

Also impressive was the presentation by Filipov, who was genuine and realistic, enthusiastic and humble.

“We are back in the crane business,” he said. “Terex Cranes is back.”

He discussed how important the Terex Cranes team is and will be to the future success of the cranes designed and produced by Terex and Demag.

“We now have the best team in the industry,” he said. “We have a fantastic team and none of the work we have been doing over the past 10 months would have been possible unless that team was executing well and helping me drive a lot of change in the organization.”

And then he said something even more interesting.

“We want you to pass along the message to customers that the Terex Cranes business is not for sale,” he said. “We’ve been building cranes for 100 years and we are going to build cranes for another 100 years.”

Garrison, Filipov and the Terex team consider their accomplishments as an epic ‘comeback.’ Chances are good they are right.

And then there was the Demag AC 45 City, a really cool looking crane. According to Filipov, the new 3-axle unit redefines compactness in the 45-metric ton capacity class. The crane is only 8.68 meters long, 2.55 meters wide and 3.16 meters tall. The height can be reduced to less than 3 meters.

The base section of the fully hydraulic main boom is 7.80 meters long. The AC 45 City is also able to work in buildings with a low clearance while still keeping its boom at a steep angle. It was designed to lift heavy loads at a small radius. 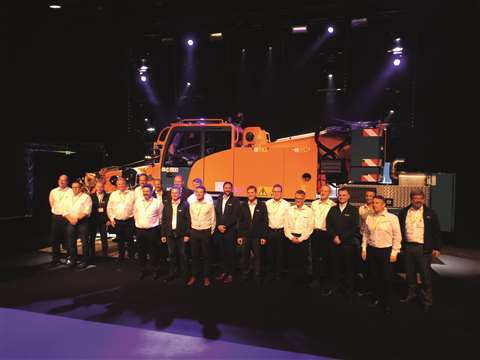 Terex Cranes President Steve Filipov said his company has the best team in the industry.

Flexibility in configuration is a key feature. With offsettable main boom extensions of 7.10 or 13 meters, the system length can be increased to 44.20 meters. It comes with an axle load indicator, a hook height indicator, cruise control and cameras for load, hook and hoist monitoring and for backing up. It has remote control and handy storage boxes.

The control system features an automatic counterweight detection function that the crane operator needs to confirm. Together with the IC-1 Plus control system, the crane is able to work with any outrigger configuration with continuously variable adjustments. It also has an automatic leveling system that enables the crane to balance itself with computer assistance when the outriggers are extended.

The AC 45 is designed to stay in the 12 metric ton axle load limit. The 3-axle unit does not weigh more than 34 metric tons, even when rigged for transport with full equipment. No additional transport vehicles are needed, and when using a reduced counterweight, the crane falls below the 10-metric ton limit.

A final thing this journalist noticed was the perpetual smiles on the faces of the Terex team. They were genuinely happy with the cranes they were showing off and the accomplishments they had to share.