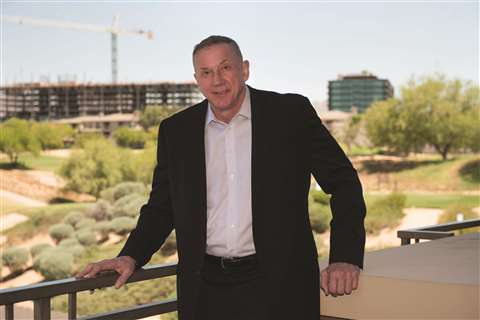 As Young began his opening remarks, McTyre placed the gavel back on the awards table and proceeded to exit stage-right. Seemingly committed to its own agenda, the gavel promptly fell off the table with a thump, and the capacity crowd, familiar with McTyre’s propensity for witty remarks and good-natured ribbing, shared a collective laugh at his expense.

Young looked at McTyre, who looked back at Young, and both SC&RA leaders acknowledged the unintended gaffe with a shrug and a chuckle. And then, without a hitch, Young began again with his remarks.

Known throughout SC&RA as a man of character, hard work and generosity, Young’s affable, down-to-earth style complements his broad-shouldered presence. Perpetually cool under pressure and quick on his feet, he took the gavel mishap in his stride, just as he has his various personal and professional responsibilities since joining SC&RA in 1997 as a safety and training representative of Southern Industrial Constructors, which joined SC&RA as “Carolina Crane” in 1967.

Much like his company’s progression, Young’s advancement through the SC&RA leadership ranks didn’t happen overnight. But along the way, he recognized the value of the SC&RA’s core principles, and he made the most of both opportunity and relationships to forge a path representative of SC&RA’s continual evolution, as well as his own.

I sat down with him recently to discuss his new role, and how his career arc led to this latest achievement.

You take an enormous amount of pride in your role with the SC&RA. How does this appointment represent that dedication?

It’s a great honor, and I truly appreciate the opportunity. The best companies in the world are right here in this association, and I’ve enjoyed the chance to advance not only this organization, but the industry. Representing SC&RA as its president is simply a continuation of my respect for everyone here, and my willingness to do right by them.

You graduated from The OSHA Training Institute in 1987, and ended up at Southern Industrial Constructors in 1993. What brought you to the SC&RA?

Earl Johnson, Jr. at Southern Industrial originally encouraged me to pursue an SC&RA membership. His thought process was that there was an opportunity for a safety professional at the association, and I would go on the company’s behalf and work within the Safety Education Committee.

Yes we did – which ultimately became the full suite of products available to members today. You look at what SC&RA offers today in terms of products. All of it came out of that group. We did a lot of that for the smaller guys that probably didn’t have those resources – which was also a bit of an original goal for me, in addition to adding support and expertise.

Eventually, you left Southern Industrial to go out on your own. How did SC&RA members react to your decision?

I received a lot of support from day one. Truthfully, I never really thought I’d go in that direction because everything was going well at Southern Industrial, and they treated me very well. I’d been doing some side work for a number of years, but one day I decided to just give it a shot, and never looked back. There’s a whole list of folks who supported me, and that meant a lot.

As your company grew, so too did your role at SC&RA.

It did. Once I began working on the safety and education stuff and helping out with the various products, I became a bit of a worker bee. I did some of the safety presentations at the SC&RA Crane & Rigging Workshops, and when American Cranes & Transport came along, James King asked me to write the first safety article. I ended up writing about 50 or 60 of those columns.

Even as an ALLIED member who technically worked on the crane and rigging side of things, how did SC&RA leadership recognize your service?

Some people on the nominating committee asked me if I’d liked to be the assistant chairman of the Crane & Rigging Committee, and I said sure. It was going to start me on the chairs from that side. But then, the guy who was supposed to be the chair ended up not being able to do it, so I ended up skipping the assistant chair and became the chairman of the Crane & Rigging Group. That inevitably got me involved in the Governing Committee. I was involved in about six different things at once. Once you get out of those chairs, you wonder if you’ll get the opportunity to be nominated at the executive committee level – and get the opportunity to do what I’m doing now. And it happened. It’s such a great honor.

Has your unique journey through the SC&RA given you a special appreciation?

It certainly has. If you look at membership now, everything has grown and evolved in such a great direction. Being involved with the budgets and related meetings, I now have an opportunity to see how wisely this association is being run. And for the members, who truly represent the best of the best, the value for safety and training is near the top of the list for a lot of people. So I think that allows a guy like me to land in this role.

What is life like for you when you get a day off?

Well, I’ve always enjoyed working out, and definitely consider it a passion. It’s just one of those things that always appealed to me, and I get a great deal of enjoyment out of it. More importantly, as a family, we really just enjoy doing things together – whether it’s going to church or the beach, or even a festival. We also enjoy football season. I realize that a lot of people might get a chance to spend more time with their families than I do, but we try to carve out that time when we can. I’ve got great kids and a wonderful wife. We try and create great memories, great times. At the end of the day, that’s more important than all the other stuff.

What excites you about the future of SC&RA?

What we’re doing with Lift & Move USA, and the work being done to bring young people into the industry is one of the
truly great things we’re doing at present. I’d also love to attract as many military folks as we can to try and transfer
veterans into the trades. They’re out there, and I’m interested in going out and finding them.