Texas aquarium gets a lift from TNT 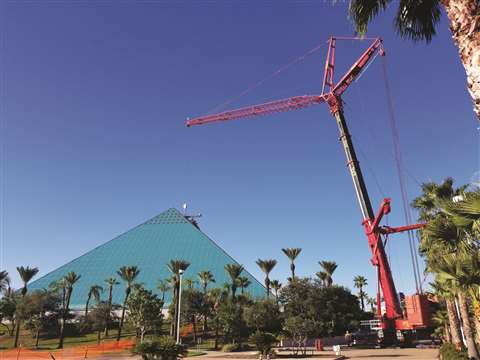 The centerpiece of Galveston, TX-based Moody Gardens is a glass aquarium pyramid that rises 10 stories amid other entertainment attractions including a zoo, golf course, hotel and amusement park. In 2015, a $37 million renovation of the aquarium was initiated. One of the key new attractions was the addition of a two-story scale model of a Gulf of Mexico off-shore oil production rig. The exhibit provides visitors with an up-close view of the ecosystem and marine life found around offshore platforms.

The exhibit involved the placement of a large, cylindrical aquarium around the steel leg or column of an oil platform. Gilbane Builders was the general contractor that approached TNT Crane & Rigging about setting the large aquarium inside the aquarium pyramid.
The challenge was to lift a 15,000 pound, two-section glass aquarium tank up and over the steel oil platform leg. To perform the lift, an 8 by 8-foot section of the glass had to be removed from the exterior of the pyramid structure to allow for the lift that was 90 feet above grade and 9 feet off center of the steel platform leg.

“Potential safety hazards had to be reviewed both inside and outside the glass structure,” said TNT CEO Mike Appling.
TNT’s specialty rigging team determined that using its 10-ton counterbalance beam would be the best option plus specialty rigging for the load, Appling explained.

“The TNT beam is a custom-design device which offers three-dimensional control and includes enhanced safety controls to prevent load loss,” he said “The counterbalance is held with a crane to assist in moving and positioning the load and controlled using an air-powered hydraulic system. An operator maintains stability using a remote device.”

Engineered solution
TNT’s team needed to develop a way to safely lift the aquarium sections 90 feet below the beam. To address this problem, TNT’s team added a 10-ton, air-powered, remote controlled chain fall to the rigging point of the counterbalance beam. TNT’s professional engineer designed a system so that the chain fall was connected to square rigging, supporting four points of the aquarium tank sections. The lift radius for this job was 210 feet with a total load of 39,000 pounds. From its fleet, TNT chose its 625-ton (500 metric ton) capacity Liebherr LTM 1500. The crane was rigged with 121 feet of main boom and 207 feet luffing jib and had a capacity of 47,700 pounds.

“There were some concerns with load control with 85 feet of rigging below the counterbalance beam,” said Appling. “A trial-run lift was set up in the TNT Houston yard to test the ability to lift and counter balance. The system passed all our tests.”

Prior to all work a Job Safety Analysis (JSA) was developed for the lift and reviewed and signed off on by all participants involved in the project. The general contractor was able to open the wall into the lobby area so the aquarium sections could be skated inside the pyramid and staged.

“This allowed us to make a more controlled lift instead of lifting the sections outside of the pyramid,” said Appling. “Once the glass was removed at the top of the pyramid a work platform was installed and we positioned our counterbalance beam operator at the opening. He was in control of the counter balancing of the beam and load and operated the air hoist. Our rigging crew was positioned at ground level to rig onto the aquarium sections.”

Using radio communication, the rigger directed the counterbalance beam operator to position the beam over the aquarium section and lower the air hoist hook. All rigging lengths had been pre-determined and tested. Rigging was attached and the air hoist was raised to take out the sling slack. The counterbalance beam operator could then traverse the counterweights to counter balance the load. Once the load was lifted and the beam was leveled, the air hoist was able to lift the aquarium section straight up until it cleared the column height.

“The crane was then able to boom down and start positioning the aquarium section over the column,” said Appling. “Using tag-lines, the riggers kept the load very steady. When the section was positioned at center of the column, the load was lowered by the air hoist.”

Riggers applied tension to the tag lines to keep from bumping the artificial vegetation on the rig leg/column. The load was lowered to just two inches above the sealing joint. At this point the counterbalance beam operator slowly moved the counterweights forward to allow the load to rest gently on the seal joint. This proved to work better than the air hoist for the final set. The load was disconnected and repeated for the second section.
The entire lift was completed in one day without incident.

“The customer was extremely pleased with the engineering and professionalism of the TNT team,” Appling said. “This job required a highly engineered solution to a highly technical problem. Our team had the technical know-how and the hustle to get this job done safely and without incident.”