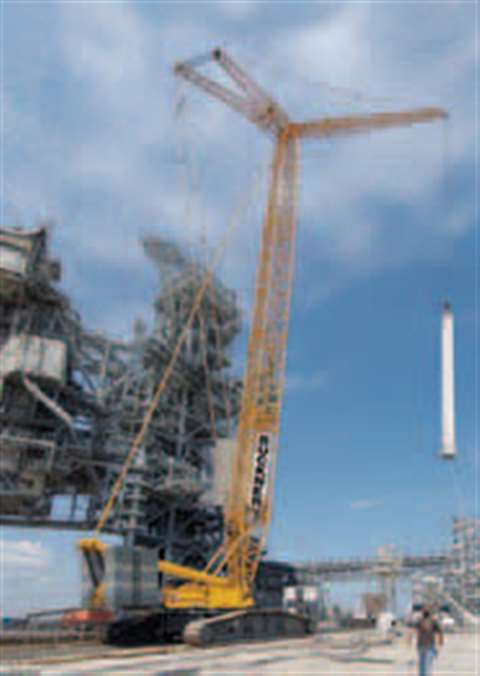 The tallest point on the launch pad, the “candlestick” is designed to attract lightning from as far away as five miles, protecting the Space Shuttle and its sensitive electronics from lightning strike

In preparation for the launch of the Space Shuttle this summer, NASA has begun spiffing up the two launch pads at Kennedy Space Center in Cape Canaveral, FL. Central to this delicate maintenance effort is Buckner Heavy Lift's new Liebherr LR 1400/2. Rigged in the SW configuration with its 184 foot “S”main boom and the 230 foot “W” luffing jib, the crane was situated in the footprint of where the shuttles are suspended before launch. It was rigged with a 342,000 pound rear counterweight in addition to the 95,000 pound carbody counterweight.

According to Buckner's crane project manager Jerry Masten, the machine performed flawlessly, making two precision lifts, including the installation of a new “candlestick,” the nickname for the launch pad's lightning protection center. The candlestick is the tallest point on the launch pad, and it is designed to attract lightning from as far away as five miles. A high tech lightning rod, the candlestick protects the shuttle and its sensitive electronics.

“The highest lift was the candlestick lift,”Masten says. “The candlestick looks like a big pipe. It is 104 feet long and about six feet in diameter, and it is fixed above the launch pad structure. Our job was to provide the crane and operator for the installation of a new one.”

Weighing 47,000 pounds, the candlestick was lifted to a height of 365 feet at a 140 foot radius. General contractor Ivey's Construction handled the final lift planning and rigging of the device, using spreader bars.

“Using our CompuCrane software and the Liccon software provided with the crane from the manufacturer, we did the preliminary lift planning to simulate the lift and show them the process we would recommend,” explains Masten. “We sent them the drawings from our software, which helped verify that we were capable of doing the jobs required and that we had chosen the right crane for the job.”

While the candlestick lift wasn't that complicated, Masten says it is pretty nerve racking knowing that every movement has to be precise so as not to damage the multi-million dollar launch pad and all of its sophisticated and highly engineered devices.

The other large-scale lift involved the installation of the new weather protection doors that protect the shuttle during the time it is mounted at the launch pad prior to launch. Masten says the doors are used to cover critical parts of the shuttle in the event of bad weather when it is on the pad.

Installed on a sliding trolley, the doors that cover the storage area weigh around 52,000 pounds each and were lifted at a 120 foot radius. These lifts also went off seamlessly, Masten says. “This crane has a lot more capacity in the derrick attachment configuration, but we didn't need all that for this job,” he says. “It's a versatile machine. We will use it for all sorts of projects.”

This was actually the crane's second job and it was slated to be dispatched to Fort Lauderdale when the call came in for this project. “With demand so strong right now, we probably wouldn't have been able to do this project as this crane was supposed to be working on a nearby power plant project, but the project was delayed and we had the crane available,” Masten says.

“We were able to send this one to Kennedy and the next one that came available went on to the delayed project in Fort Lauderdale. It was luck of the draw really, with demand for this type of machine so high, we were happy to have this gap so we could do the project.”

Kennedy Space Center was a fascinating place to work, Masten says, and he was impressed with Ivey's Construction, the contractor. “They are an interesting company that started in the late 1950s,” he says. “They have been on site at Kennedy for many, many years. They did most of the construction at the site and they know all the people there, even some of the astronauts. They are family owned and do most of the work themselves.”

Masten says he hopes Buckner will do more work at Kennedy Space Center. He enjoyed being on site and seeing up close all the details related to an actual launch. “It was interesting that we assembled the crane from the same spot the shuttle is walked out onto the launch pad,”he says. “The Space Shuttle is maneuvered on its transport from the Vehicle Assembly Building (VAB) to either of the launch pads on a gravel roadway. This was an ideal staging area for the assembly and movement of the crane, because the area leading up to the launch pad is wide and flat.”

Florida is a growing market for Buckner Heavy Lift and its sister company Bucker Steel Erection. Among other projects, the company built the Jacksonville Arena and is working on projects in Panama City and Fort Lauderdale.