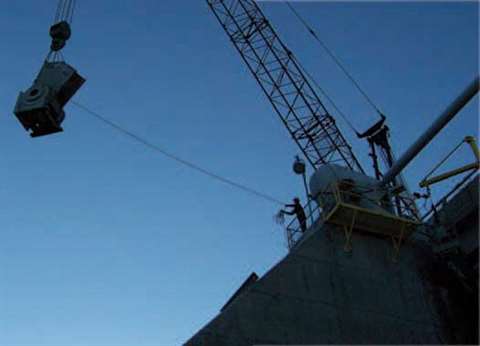 Coast to coast in the US, some 78,000 dams provide tremendous benefits to the regions in which they are located. These include: water supply for drinking, irrigation and industrial uses; flood control; hydroelectric power; and recreation. Many dams throughout the US are fascinating structures, with design attributes that make them veritable showcases for expert engineering. But many of the nation's dams are old and in need of repair, making them vulnerable to disaster.

Periodically, the American Society of Civil Engineers (ASCE) assesses 12 to 15 infrastructure categories in the United States and then issues a report card on progress since their previous assessment. In 2005 the ASCE's Report Card for America's Infrastructure gave America's dams a failing grade in terms of safety and structural integrity.

Giving US dam infrastructure a grade of D, the ASCE reports that “since 1998, the number of unsafe dams has risen by 33% to more than 3,500. While federally owned dams are in good condition, and there have been modest gains in repair, the number of dams identified as unsafe is increasing at a faster rate than those being repaired. Approximately $10.1 billion is needed over the next 12 years to address all critical non-federal dams, dams which pose a direct risk to human life should they fail.”

The US Congress has given its attention to the crumbling state of US dams, with Congressman John Kuhl sponsoring the National Dam Safety Act of 2006, which is expected to be passed by Congress before the end of the year. The legislation would increase funding for the National Dam Safety Program administered by the Federal Emergency Management Agency, (FEMA), which seeks to improve the safety and security of the nation's dams. The bill would increase the annual authorization for the program from $8.6 million to $12.7 million. The program would fund $8 million in annual FEMA grants to states for dam safety and provide $2 million a year for dam research. Passage of the legislation will allow FEMA to provide vital support for the improvement of state dam safety programs, which regulate 95% of the more than 78,000 dams in the United States.

Dam rehabilitation and construction projects are big business for crane dealers and crane rental companies. Even the smallest dams need routine maintenance and overhead cranes and construction cranes are needed for a variety of routine and specialized tasks.

“If you are familiar with our geography, we have rivers running in all different directions,” says Gary Neal at the Spokane branch of Coast Crane. “On those rivers are hydropower projects for all the municipalities in the region that need the power and water. And where there's a dam, there's maintenance and we sell, rent, lease and maintain cranes in that arena.”

Dams provide steady business for crane dealers and rental companies throughout the west and Pacific Northwest, although the business often “flows with the politics,” says Neal. “Congress is now going to set some money aside for some [large-scale] maintenance. Many dams do have maintenance issues.”

In addition, municipalities and other dam operating entities are working to get funding to replace the large turbines on older dams in an effort to increase power generation without increasing water flow. “This is happening up and down the major causeways,” Neal says.

“Dam maintenance requires lifting equipment,” Neal continues. “Most routine maintenance is handled with overhead cranes installed at the dams but we rent and sell them cranes to maintain those large overhead cranes and to do the restoration work that is needed.”

The dam market for cranes runs the gamut, Neal says. “I've sold anywhere from 8 ton to 240 ton cranes for work on dams,” he says. “I would say, generally, you are talking about a medium size market, probably in the 75 ton capacity.”

Dam restoration has become a specialized business for Richland, WA-based WHECO Corp. Initially, WHECO's dam work involved restoring gate hoist machinery on dams along the Columbia River. In time the company was hired to replace the deteriorating bearings in gate trunnions on the Rocky Reach Dam, the Priest Rapids Dam and more recently at the Wanapum Dam, all on the Columbia River.

“This type of restoration work is fairly new to the US,” explains Dave Wood, WHECO president, “but with the failure at the Folsom Dam in California, everyone became aware of the problem.”

In 1995, a spillway gate on the Folsom Dam failed, with the cause determined as failed bearings in gate trunnion assemblies. While the flood damage was minimal, the cause of the failure prompted a closer look at dams built 30 to 60 years ago and utilizing similar floodgate design.

A sizeable amount of money has been spent and will continue to be spent on replacing turbines to make them more “fish friendly.” There is a movement by some environmental groups to dismantle some dams altogether, another costly project.

Chances are that most of the 78,000 dams in the US will continue to generate power and provide water for the communities they serve.